Wimbledon Taken to a Store Near You 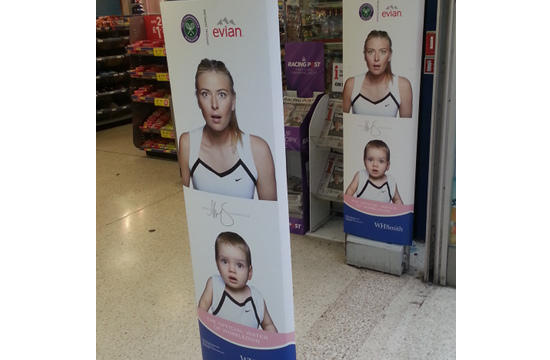 Live & Breathe has created an in-store activation campaign for evian® to leverage its sponsorship of The Championships, Wimbledon 2013.

The Creative features evian® ambassador Maria Sharapova both as her current and her ‘baby-me’ self, alongside ‘The Official Water of Wimbledon’ messaging.

Live & Breathe has designed a range of in-store materials including freestanding display units, posters and shelf wobblers to run in major retailers including Tesco, Sainsbury’s, Asda, and WH Smith. Large scale depot displays have also been created to drive visibility of the brand and The Championships amongst independent retailers.

A selection of retailer promotions have also been developed including a shared consumer promotion between Wimbledon sponsors evian® and Robinsons, and competitions offering shoppers the chance to win VIP tickets to be part of the evian® Wimbledon experience.

Averil Provan, shopper strategy manager at Danone Waters UK & Ireland Ltd said: “Live & Breathe has taken the ‘Live young’ concept and effortlessly communicated this in store in a way that is engaging and will secure cut-through for the brand in a busy retail environment.”

Nick Gray, managing director, Live & Breathe, added: “Many will be familiar with evian®’s ‘Live young’ campaign and in particular the ‘Baby and Me TV ad. Our role was to capture the fun and innocent nature of this campaign and activate it in store through clear and concise creative to ensure shoppers choose to drink evian® during Wimbledon.”
#shinebright