Trends and Insight 833 Add to collection 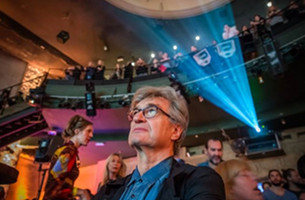 Wim Wenders is a creative force to be reckoned with – a writer, photographer and, of course, the director of such films as ‘Bueno Vista Social Club’, ‘Paris, Texas’ and this year’s ‘Every Thing Will Be Fine’. He’s also hugely respected as a commercials director - he’s just finished a new spot for stylish specs brand Persol and his work with ad agency Mother on Stella Artois is full of wit. LBB’s Matt Cooper caught up with him at the BBDO Regielounge in Düsseldorf (incidentally, in the town where Wim was born at the cinema-turned-nightclub where he watched movies as a child) to speak to him about shooting commercials and the joys of music and editing.

LBB> Music plays a huge role in your films and, in fact, you're releasing a compilation to mark your 70th birthday. How do you like to work with composers and music supervisors to make sure music has as big an impact as possible? Do you get them involved quite early in the process?

WW> Yes and no. Some composers are involved before I even start a movie, others get involved with the first cut, so that depends a little bit.

Music supervisors? I like to do that myself. I need people who can compose and help me get the music that I like, but for me the most fun you can have when making a film is to pick the music myself and I wouldn’t want anybody to do that job for me.

LBB> Do you work the same way with commercials?

WW> Oh yes, absolutely. Music, for me, is the holy grail of my work. I wouldn’t want anybody to spoil that for me. I have very good people who help me with the clearances but as far as what music should play goes, I think about nothing else! And I wouldn’t want anyone else to take over from that because the biggest privilege in the whole process of filmmaking is to find the right music.

LBB> You've done several beautiful ads for Stella Artois - what do you think has been the key to that successful relationship between you and Mother?

WW> I love Mother, I think it’s a fantastic agency. They have the perfect amount of competence and laissez faire. I can ask them something and they will give me competent answers and they will also give me a little leeway. If I have ideas, they are open. If I’m on set and I have a question, I get an answer right away. They’re so lovely to work with because they are so cool.

Sometimes, in the course of a shoot, it’s a drag if you have too many decision makers. Between the client and the agency and the creatives sometimes it can feel like decisions are reached by committee – but with Mother it’s so easy. There’s always an answer right away. You can always suggest something and you can always trust that, if your suggestion is better than any of their ideas, they will go for it. And I know that if they have a suggestion, I can count on it that it will be better than what I might have thought of before. There’s real trust between us. Mother London is my favourite club of creatives in the world.

LBB> What are the main factors that determine whether you will take up a commercial or advertising project?

WW> The key factor is whether I can bring something to the table that I’m good at. And I have to feel that this isn’t a job where I would have to admit that someone else could do it better.

LBB> Is there one brand that you'd love to make a film for?

WW> For a long time I did nothing but car commercials and I was hoping I would get something else… and now it’s the opposite! No one ever offers me a car commercial anymore and I’d love to do one! (laughs)

LBB> Any brands you wouldn’t work with?

LBB> Commercials are such a different discipline from features - probably the biggest challenge is the length and being able to tell a story concisely. How do you find the process of editing a commercial? Is it painful to reduce everything down to that to-the-second measurement or is it a refreshing change of pace?

WW> It’s a great kick, I tell you! It’s a great kick to get it down to 30 seconds or 45 seconds. As much as in my features, particularly when I was a young filmmaker, I’ve been epic and too long, it was such a discipline to learn how to do something in 30 seconds and know from the beginning that you have to get there. I enjoy the editing process more than anything else – in movies also but particularly in commercials. If I have to make shorter versions, 20 seconds, 15, I stay involved because... I just like it.

LBB> Do you work with one editor? Who is that?

WW> Toni Froschhammer, we have done the last ten commercials together. He’s based in Berlin and he’s gone with me to London or wherever we cut. I really like him because he’s smart and fast and not ego-driven. So if he presents me with a cut and I think it’s baloney, he’s not offended.

LBB> And do you work with the same post house too?

WW> No I’ve worked with lots of them in London. In Germany I try to work with Arri because they’re good friends and I’ve done all my features with them but of course you work with other post houses too.

LBB> As someone who is known for their strong creative vision, how have you managed to keep hold of that creative integrity while working on commercial projects?

WW> It’s exactly in the choice of those projects that give me leeway to keep that vision going. If I feel like I’m bringing something that I’m good at, I want to do it. If I feel like it’s all laid out and it’s just already ‘done’, so to speak, and they’re just looking for someone to execute it, then I will sometimes feel like I’m not the right guy for it.

WW> Anything is possible. You can have the greatest experience and then next time it’s really tedious and you have to fight for every little thing. I’ve just learned that if you have too many cooks and too many clients on the set and committees are being formed, then it can be difficult.

LBB> Filmmaking is as much about the team and the collective effort as it is about the director's singular vision. What's the key to getting the best from your team? Do you stick to the same people, like you do with your editor?

WW> I work with new crews, I like to stick to a few key functions sometimes but, then, in my next feature film I worked with a DoP I had never worked together with. Sometimes it’s necessary to start a project with someone who is very new.

But the key tip, in the end, is that you find people who want to do their best and you have a relationship that allows you to get the best out of them. You have to agree what that person’s ‘best’ is – because if his (or her) idea of his ‘best’ is different to yours then you’re in trouble. You have to find people who are open about what they have to offer.

Sometimes you really have to push somebody and all of a sudden he or she is really happy that you did because they realise that you’ve pushed them to the limit and all of a sudden they can see that they are able to do even more than they ever thought. I like that process. I’m sort of pushy, I like people to give their best but I also know that they only give their best if you give them leeway. I want that for myself, and I know that no one will give their best if you’ve already decided exactly what they have to do.

LBB> You're in your home town for the Director's Lounge - what are you looking forward to seeing tonight? And what's it like to see an event like this in Düsseldorf?

WW> I was born here, but I live in Berlin now.

I have no idea what I’m going to see tonight, but BBDO is a great agency and I have trust in them that they’re going to do something extraordinary. I have been in this space as a kid, I saw movies here. It’s a great line up, so I’m ready to be entertained!

LBB> I’d love to ask about the Bueno Vista Social Club as it’s one of my favourite films ever. What was that experience like?

WW> I had four days to get a crew together and book myself on a flight to get to Havana. Living in Los Angeles at the time, it wasn’t so easy. I had to go to Mexico first. I had four days and we had to start shooting on the day of arrival because some of the guys, like Compay Segundo, were going to leave in a few days to go on a concert tour.

LBB> Was it an exciting project?

WW> It was exciting because it never felt like work. It was so much fun and these musicians just accepted the three of us – it was just a three man crew. We made the movie in such close contact with them that we were like band members. We were always shooting and if we weren’t shooting they would put their instruments down and look at us and say, ‘what’s wrong with you? Don’t you like our music anymore?’ They really wanted us to shoot with them all the time.

WW> Yes, and little did we know at the time that we would expose them to the world. When we started to shoot they were still unknown. Ibrahim was still shining shoes and six months later they were The Beatles! That's exactly what happened over the course of the shoot and it only dawned on me during the editing that I wasn’t making a music documentary, that this was a modern day fairy tale and we had had the good fortune of being able to witness it.

LBB> Did you have the feeling that it was going to be that big while you were making it?

WW> At Carnegie Hall when people stood on their chairs, I realised we were onto something that was going to spread like wildfire. It was only then, in Carnegie Hall, on the last day of shooting that I saw the potential of our film.

Wim Wenders is represented in the UK by 2AM Films