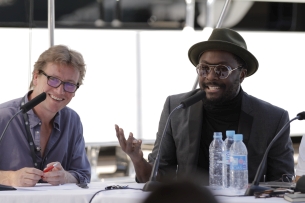 Black-Eyed Peas founder, singer and entrepreneur will.i.am joined a panel of media and ad industry leaders this week at Cannes Lions to discuss the future of the creative industries.

At the event, hosted by global communications group The&Partnership and The Wall Street Journal, will.i.am urged the advertising industry to think about advertising as “adding value to communities”, not “advertising or marketing”.

Talking about advertising that focuses on selling rather than adding value to communities, will.i.am said: “You know people don’t like it on YouTube. They skip it.”

Ensured by Google marketing executive Lorraine Twohill that 87% of people do not skip ads on YouTube, he went on: “OK, well they’re not paying attention to it. They’re skipping it in their head.

“Regardless of what your metric says, we’re not paying attention to it. If you don’t add value to people’s lives, I don’t really give two shits about your advertising,” he said.

Johnny Hornby, founder of The&Partnership, who was moderating the panel, brought up the topic of content marketing, asking will.i.am what excited him most about content.

“The fact that everyone’s in the same pole position now,” said will.i.am. “Yeah, I make content, but I know some guy in a dorm-room or someone on an airplane or a bus has the ability to reach 1m airs in nine seconds.”

The star discussed why real creative success is measured by creating shareable content which penetrates culture.

“When it’s adopted is when it’s successful, because that’s when you know it’s penetrated. The views … the views could be fake views.

Lorraine Twohill, Senior Vice-President of Global Marketing for Google, agreed: “We’re all in the content business now,” illustrating how the media industry has evolved by saying, “content can be a Snapchat message, or it can be ‘Game of Thrones’. How we consume content now is completely different.”

WPP CEO Sir Martin Sorrell agreed, referring to the days of ‘Mad Men’. “75% of our business now is stuff that Don Draper would not recognise,” he said.

“There is a duopoly, with all due respect, of Google and Facebook,” Sorrell continued, “in terms of platforms.”

Will Lewis, CEO of the Wall Street Journal and Dow Jones, voiced concerns about how new media platforms and social networks are disrupting traditional journalism models, saying: “Do we run towards offers from companies like Apple and Facebook to put content in their walled gardens? Or do we pause and think together about what the most appropriate ways of dealing with these opportunities are?

“Professionally created news is of incredible importance in societies and has deep moral purpose. If you stop doing the stories brilliantly and it just is all about cats on skateboards then none of this will work.”

will.i.am, however, enforced that Apple is here to stay, saying: “These guys changed the world. And it will never go back to the way it was. It just quickly alters.”

Referring to the rate at which new technologies are emerging, he said: “You’ve got to compete with the invisible person coming round the corner.”