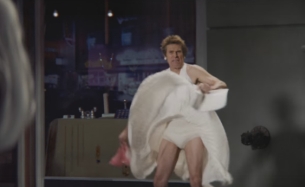 This week, SNICKERS launched its new Super Bowl 50 commercial, the latest addition to SNICKERS’ global, award-winning “You’re Not You When You’re Hungry” campaign.

Created by BBDO New York, the spot goes back to 1955 (even leveraging the 1950’s SNICKERS packaging) and features a hungry Marilyn Monroe on the set of the classic film ‘The Seven Year Itch.’ In the all-new 30 second commercial, the hungry blonde bombshell transforms into a cranky version of herself, played by actor Willem Dafoe.

The commercial also includes Eugene Levy in the role of a stage hand who’s charged with the task of making Marilyn’s dress flap in the wind above a New York City subway grate – one of the movie’s most iconic scenes.