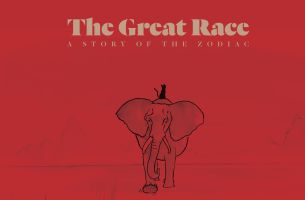 Today sees the world celebrate both World Book Day and World Wildlife Day. To mark the occasion, conservation group WildAid has launched 'The Great Race', a children’s book which aims to educate kids on the plight of the African Elephant and to help ensure a future in which they can still see the great animal in the wild. 33,000 are killed for their tusks every year, and at current rates of poaching, the species could be extinct ‘within one or two decades’.

It is part of WildAid’s Year of the Elephant campaign, which aims to build on recent momentum and make 2016 the year more elephants are born than killed, shutting down the illegal ivory trade once and for all and ending the years-long poaching war on elephants.

'The Great Race' – which is available as a hardback, a free downloadable eBook or a Sir Trevor McDonald-narrated online animation – is a twist on the ancient tale of the Chinese Zodiac, as told by elders at Chinese New Year and known by children all over the world. The traditional story of the ‘Great Race’ to decide the 12 signs of the Zodiac has been reimagined to feature a new animal for the first time since it was conceived thousands of years ago: an elephant, who needs our help now more than ever.

The Year of the Elephant campaign was launched last month to coincide with the Chinese New Year. China is the world’s largest ivory market, but – alongside other prominent markets the United States and Hong Kong – has recently vowed to phase out commercial ivory sales. WildAid is calling for the worldwide closure of ivory markets and is asking these three countries to cement their promises with both specific details and a detailed timeline for the phasing out of commercial ivory sales.

To date, the campaign has received more than 325m impressions on social media, helped by celebrities including Yoko Ono, Lupita Nyong’o, Ricky Gervais, Ellen DeGeneres, Leonardo Di Caprio, Jackie Chan, Sir Richard Branson and Arianna Huffington calling on their fans to #JoinTheHerd and wish the world a Happy Year of the Elephant. It has been viewed more than 35m times in China, the world’s largest ivory market, and went viral in Tanzania, the country most-affected by poaching, following a music video from African hip hop star Alikiba.

'The Great Race' was devised by creative agency Grey London, written by Dominic Butler and Liam Riddler, and edited by Ben Clapp. It was illustrated by Tundra*, while the film adaptation was created in partnership with Annex Films.

video
Today is World Book Day and World Wildlife Day. To mark it, WildAid has published a children’s book to help save the elephants
view more - Creative