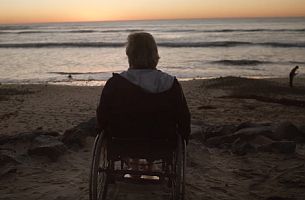 Wieden+Kennedy and the National Multiple Sclerosis Society are using Virtual Reality to let people living with multiple sclerosis experience their passions in a new way. MS is an unpredictable, often disabling disease of the central nervous system that disrupts the flow of information within the brain, and between the brain and body. It can take things away from people, sometimes the things they love to do, or the ability to do them in the way they used to.
To kick off MS Awareness week, the Society is launching "Together We Are Stronger," a campaign that combines the power of storytelling, the strength of shared connections and the latest in technology. The campaign is aimed at bringing people together to share the solutions they have uncovered to overcome the challenges of MS.

Two films, captured using Virtual Reality technology, highlight Steve Bettis and Amy Meisner, each of whom have not been able to pursue their passions in the same way since their diagnosis of MS.

- "Off My Wave." Steve, a local surfer from Ocean Beach, CA, has been living that lifestyle for over fifty years. A few years after his diagnosis his ability to balance and ride the waves started to fade. His good friend, professional longboarder Robert “Wingnut” Weaver, took to the waves with a virtual reality camera so that Steve could once again experience the joy of being in the water again.

- "Exit Stage Never." Amy, a longtime professional dancer from NYC, was diagnosed in 1997. She now dances with her wheelchair and choreographs others, but is unable to perform like she once did. LaTonya Swann, a fellow professional and BET's Born to Dance winner, took to the stage with a virtual reality camera to share with Amy a whole new dance experience.

The campaign encourages individuals to connect and share their solutions and passions with one another by posting their own videos across social channels with #WeAreStrongerThanMS. See these experiences and find out how you can share yours at WeAreStrongerThanMS.org.

Joe Staples, Executive Creative Director, Wieden+Kennedy Portland commented on the project: “Each person we met was working around their specific symptoms with dignity and passion. But equally, each had at least one action or hobby that they still talked of fondly, something they could no longer do. What became clear as we worked was how VR allowed these people to experience some of the things MS had taken from them. We aren't doctors, we can't cure MS, but for a little while we might be able to make it disappear.”

Director John X. Carey added: "This project has really opened my eyes to the unique ways VR can help people affected by disabilities live their lives again. It was an incredible learning experience for me as a person and a director, with regards to both awareness of the physical and emotional challenges of people living with MS, and the power of 360 degree film making."

Oliver Fuselier, Managing Partner, Live Action, Tool of North America explained: "John was the natural choice to bring this project to life because we knew it required a beautiful and authentic aesthetic. With his innate ability to provoke and capture emotion, John used virtual reality to amplify the impact of the storytelling. He really enlightened all of us on how VR can exist within and enhance a more traditional marketing campaign. We’ve been working in the VR space for some time now, but this one really hit a cord with us because it very clearly demonstrates the medium's ability to affect human lives in a way we hadn't thought possible before."