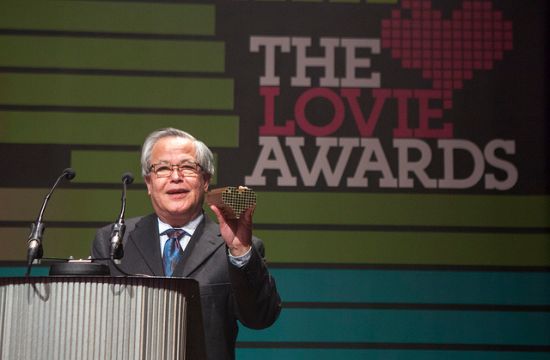 Think digital innovation and the image of Silicon Valley start-ups springs inevitably to mind. But Poke ECD Nicolas Roope was keen to highlight the pioneers on the other side of the Atlantic and so set up the Lovie Awards. And last week they honoured one unsung European invention that's seemingly invisible, taken for granted and yet which has revolutionised the way we work and play - Wi-Fi.

Vic Hayes was awarded the Lovies Special Achievement Award for his role in leading the invention of Wi-Fi - and given the award by none other than Wikipedia founder Jimmy Wales. Known as 'the father of Wi-Fi', Hayes established and led the group of engineers in the Netherlands who invented wireless Internet.

And yet despite the fact that Wi-Fi has unleashed us from the tethers of Ethernet cables and laid the foundations for a whole new way of working with digital, its European roots are largely unrecognised.

That's something that Roope was keen to correct. "The whole purpose of the Lovies is about looking at Europe and trying to surface the stories that show that Europe is a leading force in the digital world," he says. "The Americans are so good at promoting what they're doing and sometimes it can feel like we're in the shadow. Wi-Fi is so pervasive and omnipresent that people assume that it was cooked up in the Valley, but he lives in Holland, he's very much a European guy. That's what we want to celebrate."

And according to Hayes, even within the Netherlands there was until recently very little awareness of this homegrown innovation.

"The Dutch mentality is 'we just did it'. We don't advertise it. We're very bashful. In 2002 there was a journalist doing a story about telecommunications and he interviewed our boss, who told him the story [about creating Wi-Fi]. The journalist went 'what? Wi-Fi is based in Holland?' Nobody knew, not even the ministries," he says.

"At one convention, the minister who was second in command for innovation was asked 'what is the leading innovation of the Netherland?'. And said, 'well, Big Brother!'"

Keen to document the achievements of the ' IEEE 802.11 Standards Working Group for Wireless Local Area Networks' and prove that the Netherlands has more to offer the world than dubious reality TV formats, Hayes set to work writing a book with colleagues John Groenewege and Wolter Lemstra. "The Innovation Journey of Wi-Fi: The Road Toward Global Success" was published in 2010.

According to the Wi-Fi Alliance, one in ten people around the world use Wi-Fi today, but back in 1999 when the working group started their project, it was something of a hard sell. As with most inventions, the benefits were not immediately obvious.

"We dreamed of having our chips in all the computers in the world. We found out that it was very difficult to sell the idea. Why would you need a wireless connection? No one understood it until the moment that they used it," explains Hayes. As he does so, the comparison with Henry Ford's famous quotation 'If I had asked people what they wanted, they would have said faster horses' is unavoidable.

Stories like Hayes' are, Roope believes, the key to energising and inspiring more Europeans to take the initiative. "This European bashfulness does lead to these amazing things not being well understood. We're looking to talk about European success stories. Success begets success, to an extent. The European identity is a bit foggy, but we've got so many stories to be proud of."