Why's This Milk Brand CEO in a Field with a Synth? 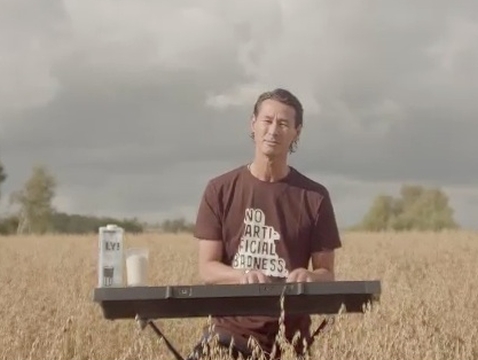 In a one of a kind performance, multi-talented CEO Toni Petersson sings a song he wrote entirely by himself to explain exactly what Oatly is all about.

Today, Oatly has released a campaign titled 'Wow No Cow' in which they have teamed up with the legendary Forsman & Bodenfors. Oatly makes oat drinks and only drinks. They don’t know anything about almonds or soy or rice or low-fat cows. All they know is oats. How to grow them, harvest them, choose them and turn them into liquid goodness.

Toni Petersson, CEO Oatly said: “When they first told me they wanted me to sing a song in an oat field I seriously thought they were kidding. How could that ever work to tell our story? I didn’t originally have time to write a song so they wrote one for me and I really hated it—don’t they think I have any creative integrity? So I wrote something I felt I could put my name on and then went out in the middle of the oat field with a synth from the 80s and tried to play it.”

The film titled ‘Wow No Cow’ is part of a series of films in which Toni takes Oatly’s message to a wider online audience. The films are both quirky and straightforward – like the brand itself. The series of films are created by award-winning agency Forsman & Bodenfors, who also created the legendary ‘The Epic Split’ by Volvo Trucks.

Toni TV is a series of films depicting the life and times of CEO Toni Petersson as he attempts to explain why people should try Oatly’s products. The series of films which includes more than 20 episodes at present, will be featured on Oatly’s Youtube channel.

Toni TV was recorded in and around the organic oat fields of southern Sweden where Oatly has it’s offices. In order to ensure that viewers get to meet the real Toni Petersson, much of the footage was filmed without Toni’s knowledge that he was being filmed. Toni was also not alowed to view any of the material until just before it was released. Was it to trick Toni? Not entirely. It was important for the viewer to get an honest idea of who the real Toni is and how Oatly — behind his new, off beat, dynamic and visionary leadership — is becoming a lifestyle brand that makes nutritional products to help people find ways to upgrade their lives and the health of the planet too.