Why We're Still Waiting for the Social Media Election

Trends and Insight 251 Add to collection

Isobar's Thom James on how social media is shaping UK politics, and why it won’t matter on May 7th 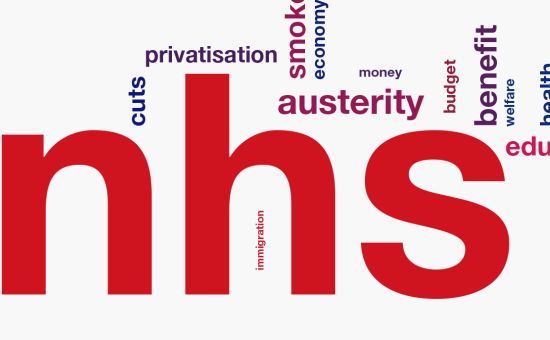 It’s been six years since Barack Obama entered the White House on the back of an election campaign heavily underpinned by a social strategy that galvanised voters to great effect.

Recalling our last general election in 2010, the efforts of the various UK parties to harness social media hardly bear comparison. The TV debates dominated the discourse, with social a superficial background layer as politicians and parties tentatively edged onto Facebook and a nascent Twittersphere.

To put the efforts of the main parties in perspective, Obama grew a Facebook fan-base of 2 million over the course of his campaign, at a time when Facebook fans had genuine value. The Tories ended the election with a community of around 100,000, the Lib Dems 90,000 (perhaps reflecting Nick Clegg’s popularity during the debates) with Labour lagging on 50,000 fans.

As we head into the home strait of this year’s election, can we say that social media will play a demonstrably greater role in the outcome than it did in 2010? Certainly, the role of social within politics has evolved inexorably since then. While our collective faith in the political process is at its lowest ebb in decades, social has brought about an era in which our leaders are more accessible to praise or pillory than ever before, with the importance we invest in personality sharpened further under the lens of social media.

Over 400 of the 650 sitting MPs use Twitter to connect with their constituency. A good proportion seem to revel in the liberation from being on-message the platform affords them (with the odd disastrous result), and are happy to talk to voters who engage them. Senior party leaders may have their feeds managed on their behalf (Nicola Sturgeon being a notably candid exception), and therefore indulge little in the way of two-way conversation, but the unfiltered opinions of many candidates through the channel means there’s every chance we’ll see at least one high-profile gaffe play out on Twitter between now and polling date.

Of course, it is only right that Twitter, that bastion of civil and reasoned debate, become an electoral battleground. Slanging matches between notable personalities are the spectator sport of social media, and with most parties adopting campaigns that personally target the opposition, barbs between the party leaders in social are intensifying as we count down to 7th May. 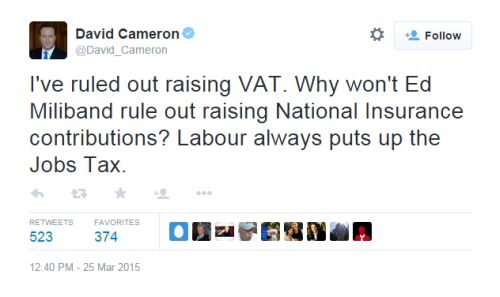 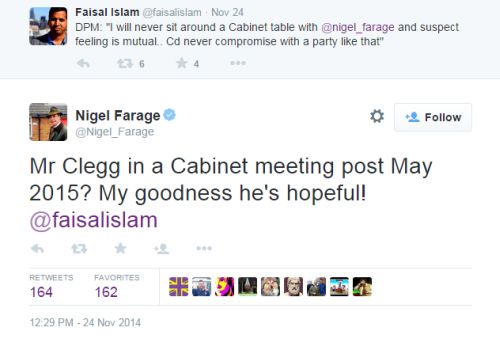 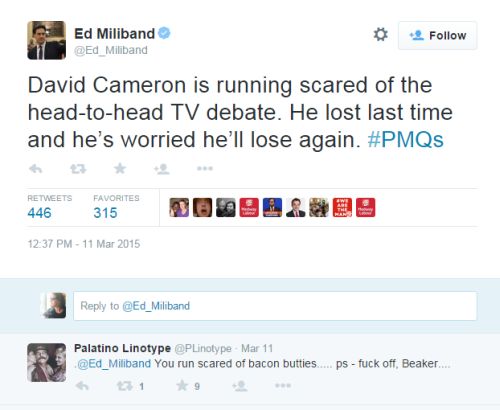 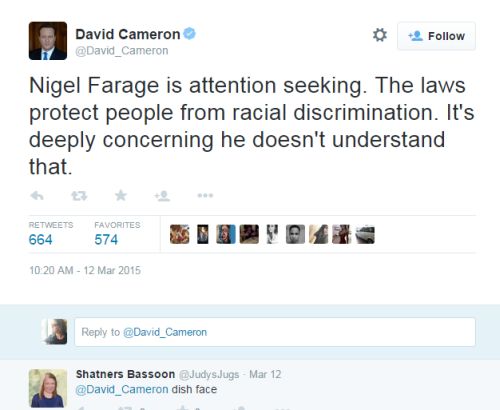 While Twitter is being used by individual candidates to build more direct relationships with voters, the use of Facebook is reflective of that channel’s repositioning as a broadcast platform rather than one predicated on community building. The main parties are putting budget behind the promotion of video messages, with the resources at their disposal highlighted in the recent release of spend figures for Facebook media. The Conservatives’ monthly spend of £100k on promoted posts dwarfs that of many brands, let alone their opposition, while Labour ramped up its own investment last week in with the launch of its Martin Freeman-backed video message. 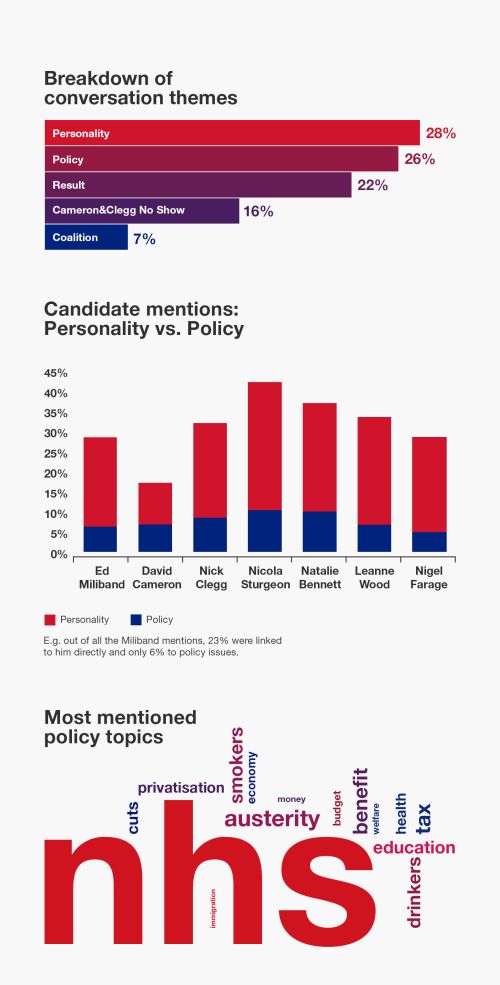 The more marginal parties are making Facebook work much harder for them, by necessity relying on more traditional tactics for community engagement. It’s paying off handsomely for UKIP, who have cultivated a substantially larger Facebook community than Labour, and outperforms all parties in terms of engagement. The Greens also worked extremely hard to promote membership through social, an ‘old school’ attempt at building a groundswell of support that ultimately resulted in their inclusion in the seven-way leaders debate.

That debate, and the subsequent BBC debate without the coalition leaders, threw up some fascinating insights into the way in which we engage with politics. Personality has a huge influence on our attitudes towards politicians, often taking precedence over their actual policies. The “Milifandom vs. Cameronette” debate has been an amusing sideshow, but in such a marginal race the extent to which people feel they can relate to a candidate may ultimately help sway a vote. 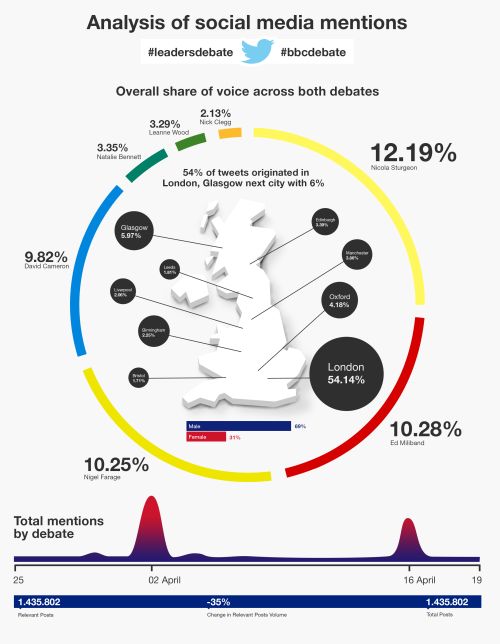 We analysed social conversation around the two debates, and found that people were far more likely to reference a participant’s persona than anything policy-related they might have said. These debates can sometimes seem like glorified popularity contests, but the fact that Nick Clegg was able to parlay his strong debate performances into power (of sorts) indicates the impact they can have on voter attitudes.

But the case of Nicola Sturgeon demonstrates how facile this focus on personality can be. She was comfortably the most-talked about politician throughout the debates, with the most positive language used to describe her. We seem drawn to her on the basis of her outspokenness, and the fact she’s a fresh alternative to Cameron and Miliband, never mind that the vast majority of us can’t vote for the party she leads. 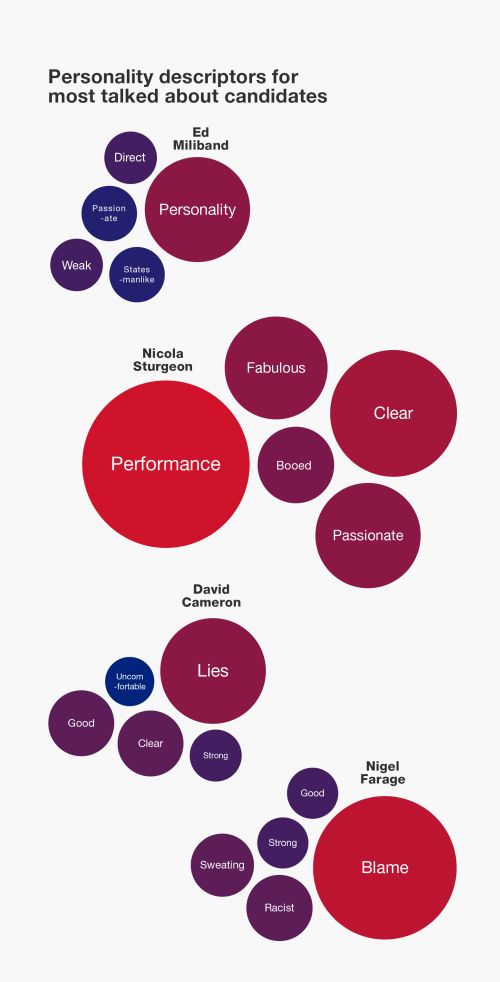 More broadly, comparing the way in which the female candidates were collectively discussed in relation to their male counterparts is illuminating. A recent Guardian article highlights research from the Barbara Lee foundation that states that, while people don’t need to like a male candidate in order to vote for him, they won’t vote for a female candidate unless they do like them. It’s an insight that is supported by the data from the debates, which shows that people were far more likely to refer to the personalities over the policies of Sturgeon, Wood and Bennett when referencing them than they were the male candidates.

The geographic divide is another interesting outtake from the analysis. While there’s the clear skew towards London that one would expect, the fact that Glasgow and Edinburgh were the second- and fifth-most active cities is a telling indicator of how galvanised the Scottish electorate are, with the independence referendum a major factor in the increased politicisation north of the border. This insight reinforces the central role the SNP are likely to play in the likely messy aftermath of May 7th.

So if the discourse amongst voters is perhaps slightly disconnected from what the parties might want it to be, it begs the question as to whether any of their social media campaigns will have a demonstrable impact on the outcome of the election. Speaking at AdWeek, YouGov founder Stephen Shakespeare poured cold water on the notion that this would be the UK’s ‘social election,’ suggesting most parties were simply preaching to the converted. It’s hard to disagree when one looks at the varying channel strategies being adopted. Almost 7 years on, no one party is doing anything as singularly concerted or sophisticated as Obama’s election team. Social may well be viewed as an important channel, but it’s being treated as a box-tick, a proxy for pamphleteering that fails to do anything truly distinctive with the channel. It would be a huge failing on the parties’ behalf if they were not using social data to segment and target voters in the marginal seats that may prove pivotal to the outcome.

While it’s highly unlikely a party will sneak this election based on its digital campaign, the debate that takes place amongst voters across social in the coming weeks will be a strong barometer for the way in which this tight race is headed. As Sky News’ Isabel Webster noted at a recent Twitter event, the honesty and openness with which opinion is expressed in social can sometimes make it a more reliable indicator than standard polling, where people do not always give reliable answers as to their voting intentions.

Perhaps that is where social has had the most positive impact on our attitudes towards politics. We have a platform to collectively debate our beliefs and allegiances, debate may frequently be uncivil and unreasonable, but that has nevertheless brought some passion back to political discourse. We traded an average of 8,657 tweets per minute with one another during the first leaders debate, more than were seen the last time an English team contested a Champions’ League final in 2012.

Used effectively, social media can help arrest (if not entirely solve) younger voters’ slide into apathy. Going back to Obama, and more recently the Scottish independence and Greek elections, these voters connect more readily around bigger ideas than specific policies. In a landscape where single-party governments look set to be a thing of the past, the potential of social to connect parties with voters around a handful of key messages underlines its importance for the future of political discourse.

So while the UK will continue to wait for its first truly social election, we should be appreciative of the effect social media has had since we last went to the polls, and excited by the potential impact it has yet to fully realise in Britain.