Why Turin Should Be On Your Creative Radar 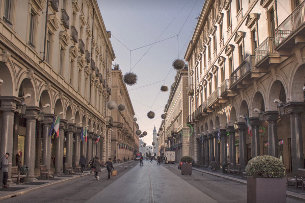 Turin was a city that flourished around Fiat. An industrial city, full of warehouses, dedicated to the production and manufacture of motorcars. Much of the workforce was either employed directly by Fiat or one of the many satellite activities that kept the city and Fiat workers going.

But as the processes of car production began to change, so did Turin. Car production began moving abroad, leaving many of the city’s warehouses empty and unused. “The city suffered a deep crisis for a long time,” says Luca Gonnelli, founder of ILLO, an animation company based in Turin. “But then a generational switch happened. Crisis started to mean opportunity due to low rents and a big switch in focusing public resources on cultural activities. It was a long, slow process and Fiat never left completely.”

The positive change is widely attributed to hosting of the Winter Olympics in 2006 – incidentally around the time that the global financial crisis was beginning to take hold. “Until then, Turin was hardly regarded as a tourist destination,” says Irene Ameglio, project manager at Latte Creative, which creates digital communications for non-profit organisations.

In preparation for the games – and the arrival of spectators from all over the world – the city invested in not only general infrastructure but also cultural attractions. “The city itself realised that tourism was great and a feasible opportunity to grow, so change didn’t stop there,” adds Irene.

The past few years have seen new art spaces open, a brand new campus for the university built, hundreds of bars and restaurants now make up the city’s central neighbourhoods and squares and historical buildings have been restored to their former beauty. Multiple languages can be heard in the streets and there is always a healthy queue to get into attractions.

As mentioned, much of the city’s transformation unfolded as the world was in the middle of a global financial crisis – but while the crisis led to the closure of factories and a rise in unemployment (especially among younger people), the city’s newfound taste for tourism set it in good stead to succeed in other avenues. What’s more, people began to realise that Turin was a desirable place to live. It’s not a huge place but still offers big-city services, it has good universities and the cost of living is lower than Milan, Rome and even smaller cities such as Bologna and Florence. Designers, artists, musicians, entrepreneurs and general creatives flocked to the city.

“I think the city was able to see that something was changing and was brave enough to really try to make the best out of it,” says Irene. “It created a new identity almost from scratch, and it did so by taking advantage of what was already there – history, style, great food, art and a positive, forward-thinking attitude.”

The city’s industrial buildings are now used in a bounty of different ways. Docks Dora, an old train warehouse, hosts fashion labs, architecture and recording studios; Toolbox, one of the first and biggest co-working spaces in Italy is based in an old industrial neighbourhood (three new co-working spaces are set to open soon); a former electric cable factory has been converted into an innovation and startup incubator; the huge Fiat Mirafiori factory welcomes students from the polytechnic university; the old city prison is taken over by The Others Art Fair for a week each November; another location has been converted into a club / street art lab / community garden in which people can grow vegetables and / or dance until dawn. The list could go on – and there are still many more buildings to fill when the time is right and the money is available.

Turin’s transformation is one that can be likened to other cities / areas around the world, Berlin and Brooklyn perhaps the most obvious ones, although lesser known places such as Wroclaw, Porto, Ljubljana, Tallinn and Leipzig are also worth keeping an eye on. Detroit is another with close links to Turin. The failure of Detroit as a city was in large part due to the failures of Ford, General Motors and Chrysler. Fiat also now actually owns Chrysler after an acquisition in 2014. What’s more, Detroit’s Movement Music Festival, which showcases the city’s famed electronic music pedigree, now hosts an annual festival in Turin.

But it wouldn’t be fair to Turin to assume that its changes are completely in parallel with other cities around the world. “There is something unique in every change of this sort,” says Irene. “And I think what makes Turin different from all other ‘up-and-coming’ cities is the coexistence of a very specific Italian identity, solidly built on baroque architecture, royal squares, red and white table cloths and all those stereotypes that have been part of Italy’s fame forever, with a fresh, curious, innovative attitude towards our life in the city.”

So, the foundations are well and truly in place for a thriving creative community, but, in reality, much of Italy’s clients are still based in Milan and Rome. Is that a problem for Turin based businesses?

“In our experience, I would say almost irrelevant,” says Irene. “The train takes 50 minutes from Turin to Milan – which is like a normal commute in Milan itself – so we just go there when it’s needed. Rome is four hours by train which is also very doable even in one day. Most of the time though we talk on Skype, exchange materials via Dropbox and work collaboratively on Google documents.”

“The great thing about today is that physical location doesn’t really affect the workflow anymore,” adds Luca. “Turin is great. The thing I like most about it is that it’s a no bullshit city. In Milan everything is fashionable, you have to be there, do that. And that makes you lose focus. Turin, instead, is a very pragmatic city.

“And if we were in Milan, we probably wouldn't have our office dog Pinguino (literally, Penguin). And that is something that I would definitely regret.”