LBB’s Ben Conway speaks with the team behind New York’s newest VFX house Fancy, discussing its creation and future plans as a sister company to Goldcrest Post, the need for adaptability in VFX and being “built for” the hybrid remote-working future 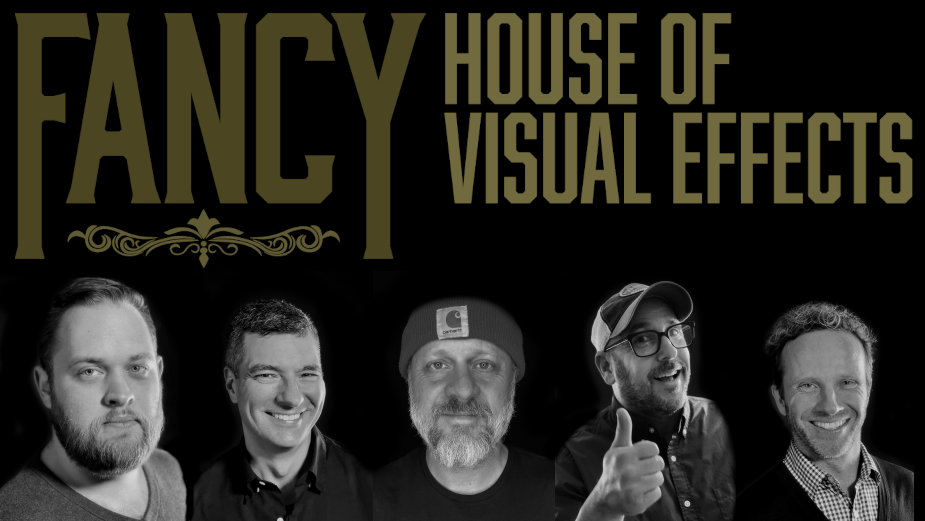 “Everyone dreams about starting their own shop, well I certainly did,” says Randie Swanberg, founder, ECD and VFX supervisor at his new VFX house Fancy - a sister company to Goldcrest Post. The founder “needed a new challenge” after more than 25 years in the business, working on everything from films to music videos, websites and commercials. His calling? To create a “dream team” of VFX experts, he says, “To curate a creative offering made up of the best people I know. To create an oasis for creative growth that will generate an exceptional product to our clientele.”

Joining Randie on this New York-based crack team at Fancy are several of his long-time collaborators and co-workers. Mario Caserta is one of Fancy’s owners and VFX supervisors - a close friend whom Randie met as a freelance Flame artist in 2008 and maintained a loyal bond with ever since: “We were immediate friends, finishing each other’s lines, quoting the same obscure movie quotes and song lyrics.  I imagined even then that working with this guy would be amazing.” He continues: “He’s smart. He’s nice. He’s efficient. He gets it. He continues to innovate his process. He knows how to run a client session and gets the absolute most out of his team. I love watching him operate.”

Also forming this new team, are EP and director of sales Graham Dunglinson and head of production, Alex Tracy - both of whom crossed paths with Randie whilst at Method Studios. Expressing his joy for working with them both again at Fancy, Randie says: “I loved [Graham’s] charm, humour and dedication but mostly the care he showed to the people involved in the process… Graham holds it all together. His character is unwavering.” He adds: “Bringing Alex on was a no-brainer because he’s in the people business. He’s already grown far beyond that and has helped take Fancy from a small start-up to an efficiently run VFX boutique.”

And rounding off this foundational group is head of CG, Todd Peleg, whose goal is to team with sister company Goldcrest Post and his Fancy colleagues to create a “flexible and adaptable company,” that can “work on emerging technologies and push the boundaries for what's possible from both the technical and artistic side.” Despite having to adapt to remote working, Todd is confident that he can succeed in creating an engaged and cohesive CG team at Fancy, saying: “The difference between Fancy and other places is the freedom I have to build teams and run jobs in a way that I am comfortable… [To create] a place where people like coming to work as both freelance and staff.” 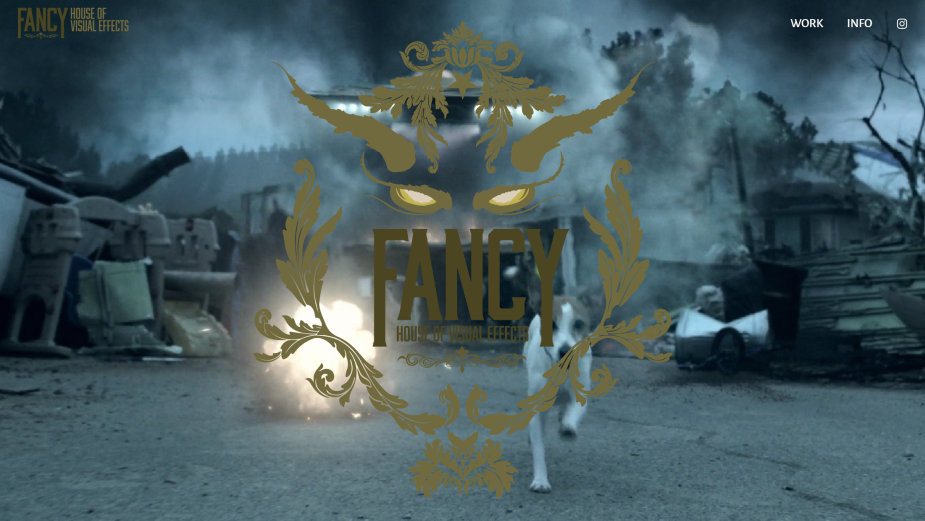 Running global teams of 30 or more for many years as a Flame artist, has groomed Randie for leadership and he credits the “countless hours in the trenches” with his colleagues Mario, Graham and Alex as the foundations for their mutual admiration and the initial success of Fancy. Speaking with all four of them, it is clear that they are all on the same page and have an immense level of respect for one another. Alex says: “Each of us are more than just an animator, a comper, a producer. We each bring a point of view that pushes a project past what is initially expected. I absolutely get that same sense from everyone at Fancy.” He continues: “There is no ego here that you have to tip-toe around. We work well together because we all remain accountable and communicate. We all have a similar sense of humour and have been through so many crazy projects together that nothing really scares us anymore.”

When asked what will separate Fancy apart from other VFX houses, Mario (“the most charming fella” that Graham Dunglinson has ever known) explains that the team offer a “personal touch”, with owners and artists that are “personally invested” in a diverse variety of projects, from art installations to film and T.V. Sharing in this philosophy, Randie says: “We’re small but we’re efficient. We leveraged what the world learned over the last two years regarding remote workflows and outsourcing and we’re flexible. Even at our small size we are covering several creative subgenres from traditional TVC to broadcast design and even immersive. We want to keep it versatile. We want to make it personal. Ultimately, it’s our names on the plaque. There is no ‘kicking it upstairs’ here. We take personal responsibility for everything. The artists make up the company.”

This versatility is something that has influenced Fancy’s hiring strategy - now seven full-timers and six freelancers strong, with plans to reach 30 by 2023 - they have prioritised a slow build of top-quality talent, leaving time to “kick the tires” on every aspect as they grow. To aid this versatility, the team currently operates as a “hybrid studio”, using virtual machines and cloud rendering techniques - learnt from the pandemic - which Randie says optimises their workflow: “Versatility is key technically as well and it’s robust enough to handle large jobs. We will continue in this way until the work supports having more in-house workstations.”

Also at the core of their culture, is a feeling of renewal and a clean slate, which head of production Alex compares favourably to his previous roles: “The biggest difference is starting completely fresh. All the procedures and policies are up to us to create. I like the idea of using the tools I’ve learned from my past experience to create a well-oiled machine.” This ability to build their own protocols and workflows gives the Fancy team the freedom to adapt to the modern, multi-faceted role of the VFX artist and to use a variety of new approaches.

Explaining that his choice to be a ‘combo artist’ - working as both a Flame artist and Smoke editor before VFX and finishing were combined in Flame - meant he has always been able to adapt in his career, Mario says: “You can’t be tied down to one application, you have to be able to adapt. None of us at Fancy want to limit ourselves to one thing we are good at. This type of flexibility makes us excited to work on different platforms and offer more… We don’t agree with a boxed-in mentality.”

As well as the role of VFX artists, Mario also explains that the industry itself has changed due to faster technology and the catalytic events of the Covid-19 pandemic. He says that “tighter turn arounds” are one of the key changes, helped by the increased viability of remote working and the introduction of video game engines and virtual production in VFX work. It’s a far cry from when executive producer Graham was running tapes around Soho in the late ‘90s, however, the Fancy crew have prepared to be flexible and stay ahead of the curve. Alex says: “The industry has gotten faster and expects everyone to wear multiple hats. Everyone at Fancy has multiple talents that we can all rely on. We want to be flexible enough to pivot when the industry takes a shift so we can still offer the best services and make the prettiest pictures.”

Whilst they do have an office, Mario says that the team very much prefers the flexible, remote working environment that the company is “built for” and Randie explains that, since the pandemic, the clients aren’t interested in physically sitting in a Flame suite either - which allows precious resources to be allocated elsewhere: “We have a footprint in the West Village, should a client want to come in for a session, but to this point no one has asked. We have less overhead which means we can shift those building expenses to talent and technology.”

One of Fancy’s first projects that the team have an intense mutual excitement for is an Illuminarium art exhibit based on Georgia O’Keeffes 100 Flowers collection, which they have created with Radical Media. “It has been one of the most fulfilling experiences of my life,” says Randie. “We’ve been directing creative on this project since September with a team of over a dozen mograph artists across the country. Our challenge has been to create an experience that not only pays tribute O’Keeffe’s macro influenced large scale paintings but also entertain and educate the audience with stunning visual choreography.”

The 40-minute exhibit is set to be displayed in Atlanta this March, with a Las Vegas location also being scheduled. For Mario, it’s been an opportunity to stretch his After Effects compositing and mograph legs again, and is also a project that has highlighted the wide scope of Fancy’s work and his reasons for being part of the company in the first place. “I got to re-visit my base and produce art once again with an amazing team of designers and animators. We were all so into it that we found ourselves working overtime, weekends, and it wasn’t because we were asked to, or that the deadline was approaching. It was because we cared enough to make something beautiful that people would want to see.”

Now beginning work on the team’s first feature, Fancy is hoping to use their members’ combined experience and their recent work with large-scale canvasses as leverage for TV bids, commercial work and a whole range of other mediums. “[Our plans are] growing our portfolio of diverse projects,” says Mario, again expressing Fancy’s interest in being adaptable and multi-faceted. But for the coming year, founder Randie has set his sights on “slow and smart” growth that occurs in an “organic” way. He says: “We want to expand but it has to be with the right people. But as is usually the case, a dream job may fall into our lap that will require us to expand quicker than we expected. In that case, I couldn’t be more pumped that I have this core to grow with.”

From the CG team’s point of view, Todd also echoes this optimism and excitement that Fancy’s founder expresses. Hoping to make sure that the expanding team is not only skilled, but happy and comfortable as well, Todd says: “The goal will continue to be building a department that meets the standards I have for myself and for the company, and to always have Fancy represented in the best light possible.” Reiterating that the leadership team take accountability for the output and culture of the company, he continues: “In the end, the experience people have with CG is a direct reflection of me and Fancy and I take great pride in that.”

This camaraderie between its core and founding members is the heart of Fancy. And whilst the world of visual effects has seen rapid developments and changes in recent times, the chemistry between Randie, Mario, Graham and Alex remains a solid foundation on which to build a forward-thinking, adaptable VFX house of the future. Graham summarises this feeling of trust and togetherness both within the Fancy team and with their partners, which has allowed them to have such a successful start and high hopes for the future of the company:

“I wake up every morning and feel blessed that I get to work with these guys… We have the most amazing partners at Goldcrest Post - Dom Rom and Nick Quested are awesome,” and he concludes with this bold declaration for the future: “My ambitions are to be as Fancy as fuck.”