Why the Radical way to #ChooseToChallenge this IWD is to #TakeAPause 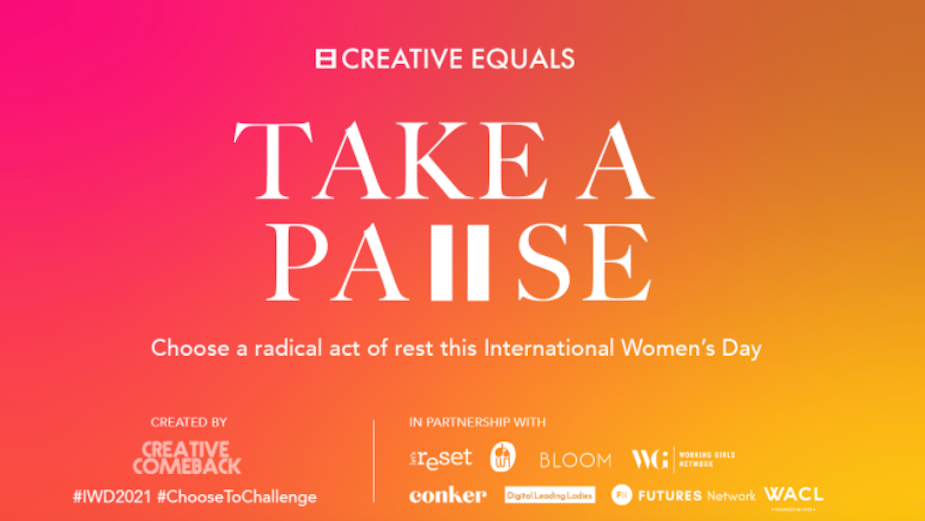 International Women’s Day 2021 is particularly poignant this year, as March 8th aso marks the return to schools across the UK and the end of the impossible task of attempting homeschooling, while also simultaneously trying to hold down a job. In many cases, this is a full-time job, which equates to a double shift. As the Creative Equal’s CreativeComeback alumni of 2020 (a returners’ programme parted by Diageo and D&AD since 2019) began exploring creative ideas for IWD2021, it was hard to ignore the bitter irony that March 8th 2021 will leave many working mothers across the industry equal parts exhausted and exhilarated.

This year,  the CreativeComeback returners are asking the industry to #TakeAPause at 11am on Monday and consider the long-term impact of the pandemic on gender equality in their businesses and their gender pay gap. The campaign is in collaboration with other women’s groups, including Bloom, DAWN, Working Girls Network, Conker, Let’s Reset, WACL and Digital Leading Ladies, who are asking individuals and organisations across the industry to #TakeAPause to stop the industry from sleepwalking into the biggest threat to gender equality in our generation.

Research by UN Women shows that, since the outbreak, women in the UK are completing on average 30 hours of childcare a week, compared with 24 hours by men (a figure lower than the 26 hours women were doing pre-pandemic). While research from McKinsey and LeanIn.org reveals that a quarter of working women are currently considering scaling back their career ambitions or leaving the workforce entirely. Behind these data points are human stories too; of women who have been pushed to their absolute breaking point, who feel they have failed or that they are not enough.

Women at breaking point  Women’s mental health is suffering.  As reported by non-profit international aid organisation CARE, 27% of women had reported increases in challenges in relation to mental illness. This compared to 10% of men. The report identified that due to the fact that unpaid labour in the home had increased exponentially in many cases this had led to stress, worries about food, work and health care.

As reported in The Guardian, a survey of nearly 20,000 mothers and pregnant women carried out by Pregnant Then Screwed found that 15% of them had been made redundant, or expected to be. ‘This is a generational rollback,’ says founder Jolie Brearley. ‘15% of mothers leaving the workforce is enormous. It took us 20 years to increase maternal employment by just 9%.’

‘Working mothers have also had an extra emotional burden to keep their children’s morale up. Many young teens have fallen prey to their own mental health disorders during lockdown, including OCD and eating disorders. Looking after their mental health as well as our own and our family’s has been exhausting,’ says Ali Hanan, CEO, Creative Equals.

Julieta Molina, a senior art director and branding and conceptual designer, was full of energy and ready to take on the world, having finished the CreativeComeback programme in 2020; then the pandemic hit. ‘I tried to keep freelance work going but it proved quite difficult and stressful – even having very understanding clients – along with entertaining my two-year-old.’ From attempting to conduct Zoom calls with a two year-old using her as a human climbing frame, to carrying the domestic burden at home, like many women in the pandemic she has faced ever-decreasing corners of her life in which she can work and be creative. ‘Come 11pm, I would still be working. It’s been tough. I feel I haven’t been able to concentrate on advancing my career,” she adds. This is why she believes the campaign is so important: ‘We want to highlight the heavy weight women have been carrying on their shoulders and encourage you to #TakeAPause to see how we can readdress gender equality.’

Building back better on gender equality

The team behind the campaign hope the #TakeAPause campaign creates the space for a real consideration of how the industry can stem the tide of inequality. Many women across the industry have reached breaking point and the message to them is a simple, yet radical one; take a break: we know you are tired, we see you, we want to make this industry more supportive of you.

Covid-19 has been tough on everyone, but recently, with 71% of furlough requests on the grounds of childcare refused by employers, mothers have been forced into an impossible situation of working and parenting. Given trends we have observed over the past few months, in a gender-regressive scenario in which no action is taken to counter these effects, we estimate that global GDP growth could be $1 trillion lower in 2030 than it would be if women’s unemployment simply tracked that of men in each sector. It’s a state of play which makes taking action vital.

‘After our ‘break’, we’re calling on all business leaders to #TakeAPause and consider how they will reset for equality, which includes three things: signing up to WACL’s #FlexibleFirst policy, a workable gender equality strategy held by leadership which tackles gender burn out and hiring women,’ explains Katya Crichton, Freelance Senior Art Director, ‘particularly returners.’ Returners now face the double whammy of being off before Covid-19 then with the ‘pandemic pause’.

As the creative courage of the CreativeComeback crew underlines, the industry must take action to better support women in the workplace, or risk losing out on an entire generation of talent. CreativeComebackLondon with Diageo 2021 will be launching with tomorrow.

Ironically, the creative idea for this campaign was conceived by a group of women on the Creative Equals Returners Course whose own journeys back to work have been – would you believe it – forced to #TakeAPause.