Behind the Work 292 Add to collection 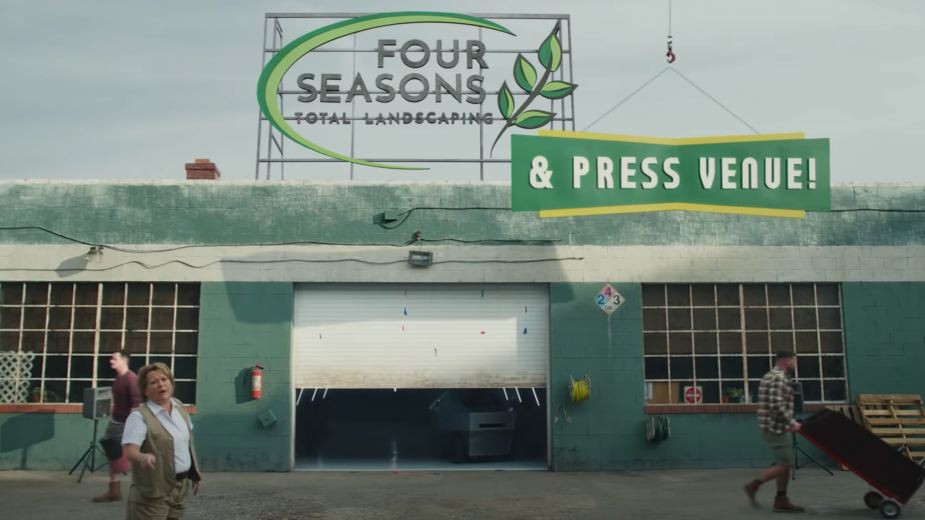 “The Four Seasons Landscaping story is literally the American Dream, from being unknown in November to the Super Bowl in February,” enthuses Publicis New York’s chief creative officer Andy Bird.
Back in November an unassuming landscaping business in Philadelphia hit the headlines when they hosted a press conference for former New York mayor and Donald Trump attorney, Rudy Giuliani. They’d taken a call from an organiser who had confused Four Seasons Total Landscaping with the city’s fancy Four Seasons Hotel – and did what any entrepreneur worth their salt would do.
The result was a highly surreal, Veep-worthy scene as Rudy Giuliani vehemently challenged the legitimacy of now-President Joe Biden’s growing victory in the US election – in front of the Four Seasons forecourt.
So, when it came to developing this year’s Super Bowl spot for freelancer platform Fiverr and positioning it as a hero for America’s small business owners and entrepreneurs, Four Seasons Total Landscaping was the perfect partner. The idea to feature them and their CEO Marie Siravo came up quite early in the creative process.
“It was one of a few ideas we had, but one that seemed to fit Fiverr’s ambition, and what they actually do to help small businesses like Four Seasons Total Landscaping,” says Andy.
The spot comes off the back of a pitch that the Publicis team won. Quite simply, the brief was to create something engaging that would make the most of a slot on Super Bowl night, in order to take them to the next level.
“Fiverr had a really successful year  - despite Covid - and have an ambition to go global, get more eyeballs, Super Bowl is definitely good for that,” says Andy.
Normally, Super Bowl ads are a source of big office buzz and energy. This year was a little different, putting it mildly – Andy says though that there was an incredibly tight team working on the idea who had already forged strong connections. “As we’re all working remotely the buzz was restricted to Zoom time, it felt a bit different this year, but also seeing as it was a pitch we kept the same tight team that worked together on that,” he says.
The ad itself walks a fine line between referring to the high stakes US election without itself being particularly political. If it takes a side, it’s the side of the American small businesses that have been working hard to keep going despite an incredibly challenging year. Plus, it ribs on an election news story that even the most ardent Republican or Democrat would have to admit is undeniably surreal and absurdly funny. Nonetheless it could still be too spicy for some brands – refer to the election and you risk being labelled ‘political’, avoid America’s political and social situation and you risk an ad that exists in a weird, detached bubble.
For Fiverr, the story and the connection with its purpose and the tone made it the right fit. “They have a bold and entrepreneurial mind set at Fiverr, and they saw the scale and fit and the fact that the Four Seasons story is a real American success story, they went for it,” says Andy.
Usually, big Super Bowl ads are fighting for attention as the game is screened in buzzing bars and lively watch-along parties. This year, though, the game was a welcome distraction after the slog of Covid and the heightened political tensions and eruptions of violence. And so too, with the advertising, Andy and his team wanted to use comedy and humour to provide a bit of a release valve.
“I think people need a release, and a need to switch off and have a laugh more than any other Super Bowl before, hopefully Fiverr and the other advertisers on the night didn’t disappoint,” he says.
When it came to making the ad, MJZ director Nick Ball was brought on board. And, curiously, the spot was not actually shot at the notorious Four Seasons Total Landscaping building, but at a replica erected in a film lot in Mexico. The star of the spot is undeniably CEO Marie Siravo.
“Marie’s the best; initially we were worried she might not feel comfortable in front of camera, but hopefully everyone will agree we didn’t need to worry,” says Andy. “The director Nick Ball said she was a natural… she loved doing it, maybe Hollywood beckons.”
it seems that Marie has taken to acting as naturally as she’s taken to hosting press conferences – how’s that for the American Dream?
view more - Behind the Work