Why So Serious? Sex, Comedy and Advertising 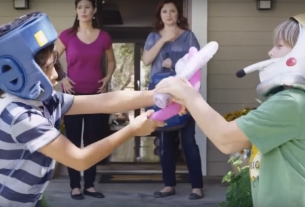 When it comes to sex, advertising often sticks to a few set formulae. It’s either hazy lenses, coy innuendo or flat out objectification. For one thing, there’s the restrictions around TV advertising that curbs explicit imagery and for another, nervy brands want to take advantage of the whole ‘sex sells’ cliché without going all the way. The net result? Depictions of sex that are unrealistic and unrelatable. And so po-faced. Could comedy provide a route in for brands hoping to leverage sex in a more human, authentic way?

There’s certainly an appetite for sex-related comedy outside of the world of advertising – it’s a mainstay of the sitcom and the success of shows like Catastrophe (on Channel 4 in the UK, and on Amazon), Master of None and Girls proves that the public ain’t too squeamish about the laughs to be had from real world awkwardness.

This week, Catastrophe (written by Sharon Horgan and Rob Delaney) took home Comedy of the Year at the Broadcast Awards – and the show’s director Ben Taylor reckons its success is rooted in its authenticity.

“Catastrophe was very specific,” says Ben, who is repped for commercials by MindsEye. “Sharon and Rob write and star in it and a realistic portrayal of sex lives was always key to the scripts. They eschewed ‘sexy’ for realism. They fancy each other a lot, they are both good looking but when the clothes come off and you’re actually seeing them get down to it, ‘sexy’ is no longer a word that applies. It’s clumsy, noisy (Rob is very specific about farmyard sounds or orgasming like the death rattle of a dying animal) and a lot of fun.”

However, despite the show’s popularity, he’s unsure that squeamish brands would be comfortable with any of Catastrophe’s sexual elements apart from the ‘post coital glow and honesty of the pillow talk’ – not that there isn’t plenty of comedy potential there.

For brave brands there’s a chance to stand out, but as Dark Energy director Matt Carter points out, it does take a certain amount of balls. “I think it would take a very brave brand to marry their product with people’s actual sex lives. I can understand why perhaps they would rather keep things in the realm of a Vaseline-covered lens or Flake ads. Perhaps the main thing advertisers could learn from film and TV comedy is to be brave and don’t just look at emulating the comedy of others. A brand shouldn’t be afraid to create its own tone of voice, as well as relaxed enough to laugh at itself. People love that!”

MakeLoveNotPorn founder and advertising legend Cindy Gallop is all for removing taboos around sex (you can read more about that here). She believes that realistic depictions of sex in advertising can be healthy for society as a whole – and that includes the funny side of sex. One ad in particular that she singles out is Barton F. Graf 9000’s Ragú sauce ad from 2012 that shows a young boy accidentally stumble upon his parents having a ‘grown up’ moment.

“I thought that was fan-bloody-tastic because that was normalising what absolutely happens, by the way. An everyday look at sex – and it’s absolutely how our industry should be looking at sex.”

Engaging in sex comedy isn’t a magic wand, though. According to Lucy Robinson, Head of Comedy at creative agency Brothers and Sisters, it still needs to be backed up by a smart strategy as funny alone isn’t enough to sell a product.

“‘Sexy’ sells we're told, as we’re all susceptible to the idea that by buying some product, we’ll miraculously somehow become sexier, more attractive versions of ourselves,” she says. “But ‘sexy’ isn’t funny. In fact the comedy in sex comedy comes from pointing out how ‘unsexy’ we really are. Instead it shines a spotlight on our embarrassing sexual inadequacies and deficiencies. Fundamentally a funny advert only works if it helps convince the viewer to buy the product. It’s not about telling a funny story for its own sake, as in TV and film, there’s a different agenda at play.”

Selling a product on the basis that it somehow elevates our sex appeal and also using comedy is a minefield. That could be why some of the funniest sex-related comedy commercials aren’t about selling ‘sexy’ products at all. McCann New York’s gun control PSA ‘If They Find It They’ll Play with It’, plays with embarrassment, believability and the fact that, yes, suburban mums like to get their rocks off too – whilst sneaking in a shocking and punchy message about gun safety.

Director Peter Lydon from production company MindsEye has shot comedy dramas like Secret Diary of Call Girl, Fresh Meat and Shameless and he feels that advertisers should think more broadly about sex. As the above ads shows, sex comedy doesn’t have to be explicitly about the act itself to be effective. Instead, the real comedy fodder lies in everything that goes on around sex.

“For obvious reasons the ad world is good at pre-sex and post-sex, as that is where the narrative lies,” he says. “Ads are about ideas and/or narrative squeezed into less than a minute, and sex takes longer… doesn’t it?”

“Let’s face it,” continues Pete, “sex on screen can be a bore. Like the songs in a musical it can be where the story stops in its tracks. What makes it funny is the context.”

Another, more practical, issue for brands and creatives wishing to talk about sex are the restrictions around what can and can’t be shown. For Matt Carter, a director that particularly enjoys comedy performance projects, these restrictions aren’t necessarily the advertising equivalent of a cold shower. If anything, they simply raise the bar for creative thinking. “I don’t mind the restrictions. I think it just creates the challenge to see how far you can push things and what you can get away with. It’s fun trying to break the rules, nudging up to the line and occasionally managing to cross it,” he says.

“Obviously online frees things up but having more freedom doesn’t necessarily make the material any funnier.”

Matt’s point about the world of online content is one echoed by Lucy at Brothers and Sisters. “Online branded content is unrestricted. It’s the Wild West, anything goes,” she says. “This provides lots of opportunity to create edgier, more controversial sex comedy. The audience also engages with it in a different way. They can actively seek it out, choose to watch it or block it, which is not the case with TV advertising. They’re happier to let you push boundaries because they can control whether they want to participate or not.”

Branded content and digital projects provide more leeway, but creatives still need to be mindful of the audience they’re trying to reach and that audience’s line in the sand between hilariously honest and too much information. And that line can be pretty subjective. For Ben Taylor ‘if it doesn’t make you wince, you’re not committing!’, while for Peter Lydon, the TMI line depends on what a particular comedy is trying to achieve.

“Different comedies approach sex in very different ways. Something like The Inbetweeners is funny because it crosses the TMI line repeatedly. The characters talk about little else while actually scoring nil!” says Peter. “In contrast, something like Lena Dunham’s Girls is more comfortable existing over that information line where humour is about raw sexual truth. Not surprisingly, it can do this because it comes from an enlightened NY female perspective.”

Another line that advertisers need to think carefully about crossing is that between laughing with and laughing at. Comedy that’s cruel, punches down and could be seen as bullying is best avoided, reckons Lucy.

“Aside from not understanding who the audience is and then misjudging the comedic tone, the other big mistake is choosing the wrong target,” she explains. “The Money Supermarket adverts work because audiences don’t think that middle aged, white men are generally victims of sexual objectification and exploitation. They’ll happily laugh at a man proudly stomping down the road in hot pants, flaunting his ridiculously large bum; or an overweight builder, parodying Miley Cyrus' sexualised routine on a wrecking ball. But if they’d used a woman in either role, some of the audience would almost certainly have found the ads misogynistic and unfunny.”

As the saying goes in Hollywood ‘dying is easy. Comedy is hard’ – but that’s true whether the comedy in question is sexual or not. Get it right though and your brand could cut through all those cloying ‘Vaseline’ shots and really make your audience giggle.

Now, who’s for a bit of slap and tickle?

Note: we did try to contact some female directors with a flair for comedy because they’re bloody funny women, but they were busy shooting! Perhaps a follow-up beckons…