Awards and Events 257 Add to collection 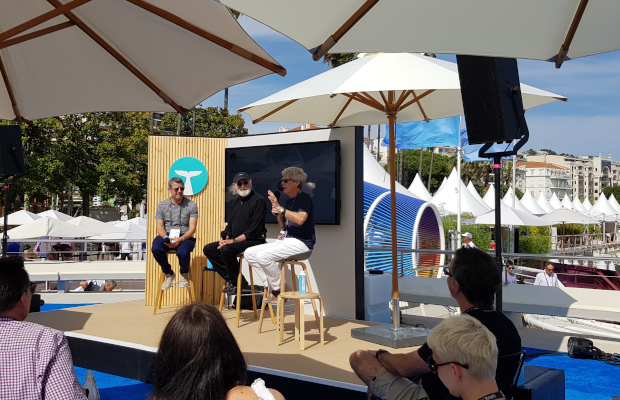 Sir John Hegarty remembers it wasn't so long ago he was asking: "What the fuck is an influencer agency?" Now he's the chairman of one and is quite excited about the prospect. That's why the BBH founder and general adland rock star was speaking on Whalar's intimate beach at Cannes Lions today, alongside R/GA founder Bob Greenberg - who serves as vice-chairman of the influencer agency. It was a session that lived up to its name, 'Meet the Legends'.
Needless to say, both are now beyond up to speed on what influencer agencies do. For Bob, the notion of diverse, individual creative talents working together across the globe to achieve common business goals is at the core of how he sees the business transforming in the years to come. "I feel that the future is going to be a distributed platform construct," he said, drawing a comparison with R/GA's 'operating system' as the agency works today.
The single most exciting thing about the rise of influencer marketing, the panel agreed, is the democratisation of creativity. "There's a lot of talk in our industry about how we get more ethnic minorities involved, how we get more women involved," said Sir John. "In the influencer world that is not a problem. The only barrier to entry is your talent."
Both creative legends expressed a strong ambition for Whalar, due to the power they see in giving brands' ideas over to people (the influencers) who truly understand their audiences, translating global, broad ideas into messages that are relevant and compelling. Sir John even went as far to claim he believed Whalar could become the most creative company in the world. Ever bullish, he said: "If you start with the belief that ideas are paramount in what you do and the execution of those ideas are paramount in what you do, literally, the world is your oyster."
The conversation broadened to the subject of building creative businesses more generally. The subject of in-housing reared its hard-to-ignore head. The pair were agreed that it's more likely to produce mediocrity than greatness, due to the nature of creative greats like Bob and Sir John. "By and large they're outsiders, they're renegades, they're misfits," said Sir John. "They want to disrupt the current process. They get stimulated by that. They don't want to be in a structure which controls them and wants to run them through a process."

Bob added: "A creatively-led organisation cannot be duplicated inside of a corporate structure in my opinion, if you want to do great creative work."
All of which naturally led to another persistent conversation this year - the high-profile (and no doubt high-value) acquisition of creative agency Droga5 by consulting giants Accenture. Sir John congratulated founder David Droga on the "several barrel loads of money," he has no doubt walked away from the deal with, and was reluctant to speculate on what will come of the partnership. What the BBH founder was keen to celebrate, however, is that Accenture's interest in an agency as creatively lauded as Droga5 is proof that "creativity has enormous value". Bob agreed that it was a movement in the right direction, but that it will take time. Droga5 and Accenture aren't like some of the creative brands that we've seen smashed into less exciting ones recently.
As Sir John put it: "You don't make a bad company better by putting it with a good company. You kill both."
view more - Awards and Events