Why Rothco is Shredding Ignorant Lies to Support Same-sex Marriage 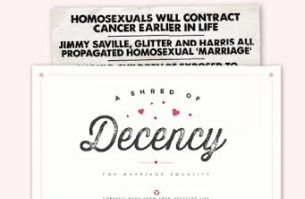 Creative agency ROTHCO has teamed up with Dublin-based paper company Daintree in a radical new campaign in support of same-sex marriage in Ireland. They’ve created confetti from ignorant No Campaign flyers to raise money for the Yes campaign in the run up to Ireland’s marriage equality referendum.

Almost two years in the making, the referendum on the legalisation of same-sex marriage in Ireland will take place on 22 May 2015. United in their beliefs, ROTHCO has joined forces with Daintree Paper, (a stationery shop on Camden Street, Dublin), in order to get the positive message for marriage equality out into the world.

There has been tense debate between the Yes and No camps in the run up to the referendum. Notably, elements of the No Campaign have stirred up controversy by spreading flyers which contain factually incorrect statements such as, “They [homosexuals] will contract cancers earlier in life.”

When ROTHCO and Daintree discovered that sections of the No Campaign were producing these materials and spreading lies, they put their heads together and came up with a new product called ‘A Shred of Decency’ –  confetti made from 100% recycled lies.

ROTHCO CEO Patrick Hickey, who was instrumental in bringing the project to life, says, “The idea of this referendum not passing was something that, as proud Irish people, we did not want to stand by and take a chance on. The creative team on the campaign spotted that there could be a wonderful opportunity to work with the new owners of Daintree who also clearly felt strongly about the referendum passing. So we reached out and the magic happened.”

In order to make the confetti the team are collecting the negative and dishonest flyers, leaflets and online literature produced by a section of the No Campaign, and recycling it into something positive. Packs of ‘A Shred of Decency’ confetti will be on sale in Daintree Paper on Camden Street, Dublin and online at shredofdecency.ie with all profits going to Yes Equality.

The agency’s online campaign will last until the referendum on 22 May 2015. ROTHCO and Piranha Bar have also created an animated film to encourage confetti sprinkling and to ensure as many people as possible get involved and help the referendum pass.

On launch day (7 April), ROTHCO and Daintree are sending out packets of ‘A Shred of Decency’ confetti to a selection of key social influencers and asking them to take a photo (by themselves or with partner/friends) celebrating marriage equality with their confetti. They will then post it to Instagram and Twitter with the hashtag #shredofdecency. Both parties hope the public will follow suit, showing their support for a great cause and helping take the lies and hate out of the debate.

CEO Patrick Hickey finishes with the message, “Any support you give this campaign is helping to drive Ireland towards the right decision on May 22nd.”