Why Masculinity in Advertising Should be Cannes’ Next Big Gender Debate

72andSunny’s Stephanie Feeney on the ‘Masculinity Today’ panel and how Axe, Guinness and Cheerios are leading the way 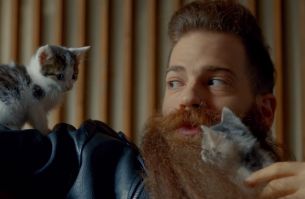 With the success of campaigns like Touch the Pickle, This Girl Can and, of course, Like a Girl it seems like in some corners of adland, at least, advertisers are thinking more carefully about how they portray women and girls in their output and about the real-life repercussions of toxic stereotypes.

But it’s not just women and girls on the receiving end of lazy clichés and restrictive norms pumped out into pop culture. The hapless, incompetent Dad who needs Mum to tidy up after him. The onanistic, weedy teenage boy. The babe magnet jock with the unobtainable pecs.

That’s why this year 72andSunny Amsterdam have chosen to look at masculinity in their seminar on Friday 24 June. ‘Masculinity Today: The Dramatic Shift and The New Normal’ will see  documentary maker Jennifer Siebel Newsom, model Shaun Ross, and professor Dr Michael Kimmel explore the pressures facing men and how popular culture can reinforce dangerously rigid gender roles. We caught up with 72andSunny Amsterdam’s Director of Strategy Stephanie Feeney to find out more.

LBB> What prompted your decision to look at masculinity in your Cannes presentation?

SF> Gender is a duality. You can’t talk about the feminine without implying something about the masculine; and vice versa. In our industry, recent years have seen a significant and important increase in conversations around the female side of gender equality: how we represent women, in our advertising and in our agencies. We felt it was time to look at the flip side of the conversation.

LBB> Who else is speaking and why are they the right people to discuss the matter?

SF> Through our work on the relaunch of the Axe brand globally, we’ve learned a huge amount about the pressures that young men face today; and the role that media can play in exacerbating, or alleviating, those pressures. All of the panellists are passionate activists for gender equality. Each of them brings a unique perspective on the pressures that men, in particular, face. Jennifer Seibel Newsom has made a documentary film about them. Dr. Michael Kimmell has spoken at TED about them. Shaun Ross lives them every day.

LBB> It’s an interesting perspective given the conversations that have been happening around diversity and gender in advertising, particularly since the last year’s Glass Lion and work like ‘Like a Girl’ and ‘This Girl Can’. Why did you want to get involved in this conversation and why focus on masculinity?

SF> 98 per cent of men have been told to “man up” at some point in their lives. Suicide is the number one killer of men under 50. Men who adhere to rigid gender roles are more likely to report having used violence against a partner. There are very real, very serious societal pressures that men and boys face, and we’re not talking enough about them. As a culture. As an industry.

LBB> Leading on from this, I’m interested to know your thoughts on the Glass Lion. What sort of impact do you think it’s had on the industry?

SF> I think it’s too soon to tell; but an award for “ideas intended to change the world” can only be a good thing. The breadth of this year’s entries, and the bravery of the work that is awarded, will tell us a lot about just how far we’re willing to push the envelope.

LBB> The award was created to challenge gender inequality and prejudice. It seems from last year’s winners and entries, many people were focusing on women and stereotypes of femininity but do you think there’s a place for the juries and entrants to consider what the work says about men and masculinity?

SF> Having entered our Axe campaign for this year’s Glass Lion, I can honestly and selfishly admit that we certainly hope so! But seriously - too often we hear the word “gender” and think “female”; in the same way that, in America, we hear the word “race” and think “African-American”; or we hear “sexual orientation” and think “gay”. As if men have no gender; white people no race; and straight people no sexuality. We have to start recognising the duality, even plurality, of social issues, in all their complexity. And to come together across gender lines to stand together for equality.

LBB> I guess one thing that often comes up when you try to discuss pressures, prejudices, stereotypes etc. that hurt men and boys, one accusation that comes up is that there’s a degree of ‘whataboutery’ and it undermines the struggle of women. How can the industry tackle gender in a way that takes both into consideration and doesn’t pit people against each other?

SF> Liberating men from rigid gender stereotypes can only be good for women. I firmly believe this. It is precisely our inability to discuss the pressures that face our men and boys that undermines the struggle.

LBB> How are cultural stereotypes around masculinity affecting young men today? I’d guess that in some ways, we’re becoming more tolerant as a society and men maybe have some more options than previous generations… but are there any challenges unique to young men grappling with their masculinity in 2016?

SF> The biggest challenge facing young men is the narrowness with which ‘masculinity’ is defined; and the pervasiveness with which it is enforced from an incredibly young age. Watch “The Mask You Live In” - that’s all I can say.

LBB> And how can the ad industry help?

SF> The simple act of normalising a broader spectrum of male identities is an easy first step. The Guinness Never Alone spot with Gareth Thomas is one of the bravest and most beautiful statements I’ve ever seen a brand make about masculinity. On a lighter note, the Cheerios #HowToDad campaign is a brilliant example of breaking the “hapless Dad” stereotype so frustratingly common in FMCG marketing. @kordalenkaleb, of internet and then Nikon fame, breaks just about every male stereotype going. These brands are opening up possibilities for male expression, rather than closing them down. It’s brilliant to see.

LBB> And on the flip side, from a commercial point of view, why is it important for clients to get their head around the issue?

SF> The best argument I can give is the positive impact that the repositioning of Axe has had on the business. Since the launch of Find Your Magic, the brand’s growth rate has tripled year-on-year. Sales across the new range are ahead of target, and our activity has doubled the shelf rotation of the new Daily Fragrance product. Quite simply: a progressive brand point of view, backed up by progressive products, works.

LBB> Your talk is about ‘the dramatic shift and the new normal’, what do you think that ‘new normal’ looks like?

SF> I hope that the 'new normal' looks like whatever the hell each individual guy wants it to look like.

LBB> One of your big campaigns this year has been Axe ‘Find Your Magic’, which seemed to be about knocking the ‘horndog teenage boy’ stereotype on the head and opening up a more diverse representation of modern manhood. Why was that a strategy you and the client wanted to pursue?

SF> Times have changed. Attraction has changed. Gender relations have changed. Male grooming has changed. It was time for Axe to face into these changes, and figure out how to stay true to its DNA - being an ally for men in the game of attraction - while also becoming a more relevant force in guys’ lives and a more positive force in culture.

We spoke to women as well as men while developing the new strategy, and women told us one thing loud and clear: The most attractive thing a guy can be is himself. To move the brand promise from “It’s in the can” to “It’s in you” felt powerful. And we got honest about the role of the product. There is no magic potion. What the new Axe range gives guys is an incredible range of products, from haircare to face care, from daily fragrance to shower gels, all of which help them work their own individual look and style. That’s what Find Your Magic is about.

LBB> How well are brands and agencies dealing with these changes? Why? Can you give any other examples of brands succeeding in getting to grips with masculinity?

SF> It surprises me, in such a male dominated industry, that we aren’t seeing more progressive work around the changing male identity. I think it’s especially important to see leadership from big, mainstream, traditionally masculine brands in this arena. That’s why I applaud the Guinness work so loudly, and why I’m so proud of what we’re doing on Axe. 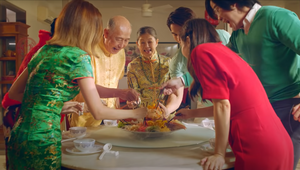 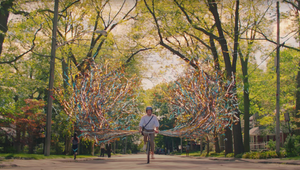