Behind the Work 315 Add to collection 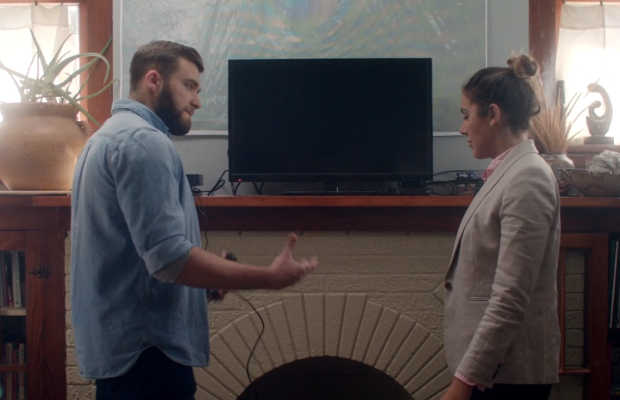 When it comes to break-ups, you’ve got to laugh, haven’t you? That’s definitely the sentiment behind director duo LAMAR+NIK’s new film ‘I (Don’t) Love U’, which sees a relationship clearly straining under the pressure of unaired grievances finally crumble over the space of a few minutes. It depicts a momentous life moment for the pair involved, but taken to such ludicrous extremes that it’s a joy to behold. Because let’s be honest, we all love a bit of schadenfreude.

LBB’s Alex Reeves wondered what was behind the film, so caught up with half of the duo (Lamar) to find out.

LBB> What inspired the film? Any real-life experiences? I can’t imagine it was a complete fabrication…

Lamar> Basically the origin story is this: I was sitting at my house and my partner of eight years was just ripping ass. In my head I was counting the farts. Finally, in my head, I was like "Damn, nine farts?", but then I started laughing at myself because in the grand scheme of things that's something really dumb to get annoyed by. I told my partner and we laughed, but it sparked a conversation around toxic relationships. It would have been so easy to let something small like that fester and turn into something ugly later.

LBB> How did the idea develop from the first thought to the final script?

Lamar> Nik and I started thinking about the scenario in which something like counting farts would come out in the open as a serious argument point and that’s what became IDLU. It’s a somewhat exaggerated version of what it would look like if a couple never actually addressed issues in their relationship, but instead let them stew underneath the surface.

We're at the age (30) where a lot of the people we know are getting divorced. The facade of the relationship has worn off and underneath it's ugly sometimes. Everyone wants to be loved and live a happy life and so it's hard to leave a toxic relationship when you're in one because a certain part of you wants it to just work, even if it won't. So for the script we used those elements and took it to the extreme, but in a comical way.

LBB> What were the biggest challenges in making the film?

Lamar> Definitely just making the thing happen. We did a lot: writing, directing, producing, art direction, 1st AC, colourist, audio engineer, among other things. The entire process of making a film is laborious, but we came out knowing much more than we did before. We come from music videos and commercials so this was a completely different challenge for us. From writing the script to hitting upload we learned a ton of lessons. We're working our way towards features and this definitely helped us inch closer to that for sure. We couldn’t have done it without our cast and crew as well and we’re glad that we were able to create a fun set together.

LBB> So it’s quite a different project for you? What did you most enjoy about the experience?

Lamar> We got the opportunity to work with actors more thoroughly. We had time to discuss the characters with the actors and they really gave it everything they had. This was actually Blayne’s (Ryan) first time on camera, so that was cool. Other than that, it was just awesome to finally start making steps toward narrative films. Television and features have always been our endgame.

LBB> Do you think it'll inspire any real-life break-ups?

Lamar> The whole short is about not settling. If you're forcing a relationship to the detriment of yourself and others around you, the relationship isn’t worth it. It’s definitely possible for IDLU to inspire a breakup, but if you've got a kid and argue like this, we hope so.