Why It’s Game Over for Gamification 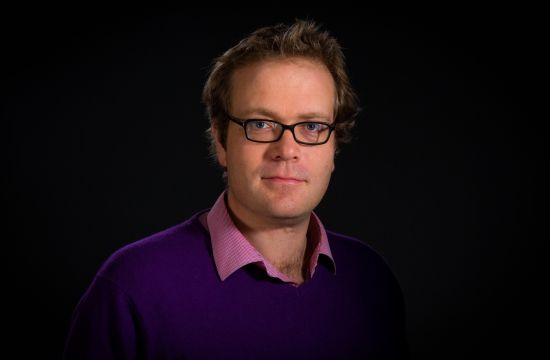 Over the past few years, gamification has been pretty much inescapable. Try and get some info from a brand’s website and the overwhelming impression is that you’ve stumbled into a Saturday night quiz show. But, according to DigitasLBi’s Head of Creative Strategy Ed Beard speaking at last week’s Another Marketing Conference in East London, it might soon be the end of play for a trend that’s been clogging up the digital landscape.

What are the rules anyway?

As with many industry buzzwords, ‘gamification’ has been poorly defined and poorly understood. Beard argued that while there is a distinction between games (activities devised as an end in themselves) and gamification (the application of game mechanics to non-gaming activities in order to encourage engagement in otherwise boring activities), many in advertising and marketing have failed to grasp the difference. A brand that creates an enjoyable game for its customers to play isn’t necessarily an example of gamification. What’s more there has been a trend-hungry tendency to retro-fit the term to describe activities such as loyalty schemes, leaderboards and self-quantification. Anything from Nike FuelBand to the LinkedIn profile progress bar has been yoked into the dubious phenomenon.

“There’s something very nice about the phrase gamification. It’s like qualification or quantification. Anything that comes with an ‘-ication’ seems to give you a certain degree of solidity,” says Beard, who also points out that there is little evidence for gamification’s efficacy.

Playing against the evidence

Despite the recent glut of academic research into gamification, an analysis of peer reviewed papers reveals little about its effectiveness. “This is the interesting bit to me; all of them were talking about projects and frameworks and none of them actually seemed to be talking about results,” says Beard.

In fact there is some evidence that not only might gamification not work, it may actually prove to be counter-productive in the long term. For one thing, the application of leaderboards or peer comparisons to things like energy consumption or driving speed reduction can encourage people who already perform well to slacken their efforts. It’s a phenomenon that psychologists refer to as ‘the Boomerang Effect’.

And if industry psych nerds should have seen the Boomerang Effect coming, they should also have predicted the longer-term fall out of gamification. While gamification activities may elicits behaviour change while rewards are being doled out, there is a strong chance that desired behaviours will disappear once the gamification exercise has finished. According to Beard this is because gamification tends to rely on extrinsic rewards rather than intrinsic.

“There’s a bit of a problem with extrinsic rewards in that if you reward someone for doing something there’s a very strong chance that the behaviour will then only be elicited if it is rewarded,” explains Beard, who thinks that rewarding people for carrying out an annoying activity merely serves to highlight how irritating it is. “Anyone with a child who they’ve managed to convince that car washing is a fun thing to do will soon find that if they start to give them a pound to wash the car, it’s no longer a fun thing to do. If you start using extrinsic rewards or start relying too much on the reward mechanic parts of gamification there is a danger that you’ll start undermining the brand or service product. We could actually make things worse although we’re making them slightly better in the short term.”

Adding to Beard’s argument, the predictable way that rewards tend to be dished out in gamification might trigger quick behaviour change but it’s unlikely to be lasting. Again it’s something the industry’s psych and behavioural economics enthusiasts should have spotted – the godfather of behavioural psychology B.F. Skinner was writing about reward schedules back in the mid-20th century.

Lipstick on a pig

Despite the lack of evidence to support gamification – and the bulk of psychological theory suggesting that there are also several flaws – clients desperate to ‘jazz up’ a dull brand are still riding the bandwagon. And while the use of game mechanics can be useful or appropriate in some contexts, more often than not gamification has been without really thinking about what it is the brand is seeking to achieve. “We’ve got to ask ourselves ‘what is the experience we want people to have?’ Is the experience we want people to have one to do with our brand or service or product or is it to do with a veneer we’ve stuck over whatever we do in the real world? And that’s the question to keep asking. It’s like David Ogilvy said about dentures – terribly dull to most people unless you’re in the market for dentures at which point they become incredibly interesting. By putting a layer of fun on everything we’re ignoring the fact that most things have their own intrinsic values. We should never be looking to put lipstick on a pig.” 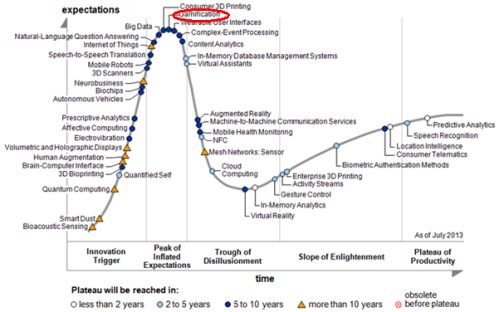 Nonetheless things are starting to change. Beard points to 2013’s Gartner Trend Curve, which placed gamification at the ‘Peak of Inflated Expectations’ – just on the cusp of the ‘Trough of Disillusionment’. For a while gamification was seen as cure-all for unengaging brands, but as the phrase loses its novelty currency, it can be appraised more objectively. “Gamification has very definitely moved from being the strategy or the objective to being just something that we might possibly do. It sounds weird to say it now, but you don’t hear many people say they want to gamify things. You do hear people in the execution say ‘we could do something quite fun here’ but there’s a big difference,” says Beard.  “We will come to realise that this was just an executional detail and not the silver bullet.”