Why Ireland Could be Your Next Move 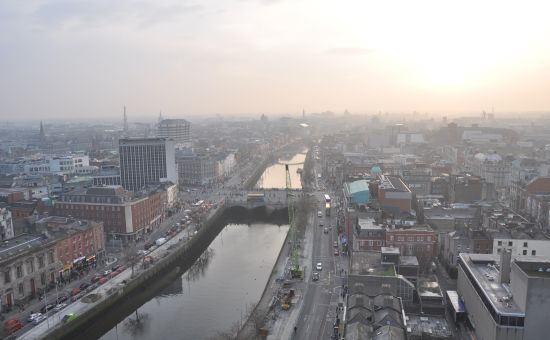 New York, London, Singapore and Amsterdam are tried and tested hubs for young advertising folk hoping to leave their home countries for adventure and a career boost. But who wants tried and tested when you’re trying to prove yourself as a creative? Dublin may not be top of mind for global go-getters trying to figure out their next move but, as LBB’s Laura Swinton discovers, a thriving digital sector, creative agencies hungry for international talent and a local industry bursting with optimism means that the Irish capital is full of opportunity.

Mickey Chan has lived in Dublin for precisely one year. With no job lined up and few contacts, she flew to the city seeking something different to her native Taiwan. It’s been a roller coaster 12 months – after a nerve-wracking two months job hunting she landed a creative internship at Ogilvy and this summer attended Cannes to represent Ireland for the Young Lions competition.

Accolades aside, it’s proven to be a great experience for Mickey, though not without its challenges. She’s a fluent English speaker who has worked in Australia and digested her fair share of US and UK pop culture – but nothing had prepared her for the idiosyncrasies of Irish culture and slang. Luckily the warmth of her new friends and the opportunities that came her way in the work place have more than made up for it.

“I would recommend Dublin as a city to anyone else thinking about their next career move,” she says. “I got to work on some big clients and projects that I wouldn’t have the chance to work on as a junior creative in Taiwan (in Asia, hierarchy really matters). IAPI (The Institute Of Advertising Practitioners In Ireland) is very helpful, they organize a lot of talks and events and also really encourage every agency to attend international awards like Cannes. For people who are not from Europe, Dublin is a great hub for traveling around Europe – in the last year I’ve travelled to six countries, 10 cities and still counting!

Although the international cohort of the Irish ad industry is growing, it’s still smaller than places like London or Amsterdam – which means that foreign talent with language skills and an alternative perspective are sought after, particularly among independent and digital agencies with regional and global accounts and projects. Several agencies have told us, off the record, that attracting international talent has to be a priority for the city’s industry collectively and within individual agencies, if the city is truly to be considered a regional creative hub.

As well as career opportunities, Dublin also has lots to offer in terms of lifestyle. Junior creatives whose freelance wage barely covers the cost of a cupboard in London or Hong Kong might find things a little less tight – and senior talent that fancies being able to see their family at the end of the day could swap an hour commute for a 15-minute bike ride. It’s lively with a proliferating foodie scene and plenty of nightlife – whilst also being warm and open and walkable. Oh yes, and there’s the pubs.

Portuguese national Diogo Dias has been at thriving independent agency Boys & Girls for three years, and continues to find the city full of things to do. “I’ve been here just under three years now, and I’ve enjoyed every second of it. Ireland has the friendliest people in the world, which made the transition so easy. Foreigners may think Ireland is just a place to come and drink Guinness, but it has so much more to offer than that. There’s always something to do here, whether it’s visiting the Natural History Museum, taking in a play or even just wandering around Phoenix Park – of course after all it would be rude not to have a pint (or two).”

The lifestyle factor is – in part – linked to wider changes in the city. Dublin’s ‘Silicon Docks’ have attracted everyone from Google and Facebook to Airbnb and LinkedIn, who all have European HQs in the city. That, in turn, has supercharged the city’s creative community and cultivated a thriving culture of restaurants, gigs, authentic local shops. For James Dunne, Head of Strategy at In The Company of Huskies, the combination of future-facing tech and a human, manageable scale means that Ireland has the life-work balance that should appeal to talent looking for somewhere to thrive outside of the usual grind. He calls Ireland ‘the next sub-hub’, and reckons its fast joining the ranks of smaller-scale cities whose quirky creative scenes are running rings round their bigger, more obvious neighbours.

“Great things happen in cities that are post-industrial”, he muses. “They release a type of energy that mega cities like London can only do in pockets. You look at Portland, Stockholm and even Antwerp – that’s where some of the most creative agencies in the world are at the moment… I think small, compact cities that have good pubs and a legacy in the shadow of a bigger city have a healthy need to prove something. They tend to have a more human scale. I work in Dublin’s docklands and I live in the south side of the city and I get into work every day down the canal on a bike. Also I think the fact that everybody knows everyone, certainly at management level, is important. It’s a fiercely competitive place but it’s also very collegiate, particularly among the independent agencies. “

It’s not just international talent that is having its head turned by the combination of optimism, opportunity and lifestyle that Dublin presents – several agency heads and Tania Banotti at IAPI note that Irish ad folk who have made a move to the States, Canada and Australia are increasingly returning to the city, bringing buckets of international experience with them. Following the onset of the global financial crisis, emigration of Irish nationals was high (at one point one person left Ireland every six minutes) but in recent years that has subsided. In 2012 the number of Irish nationals emigrating was 50,900, whereas this year the number stands at 35,300, suggesting that the ‘push’ factors have subsided somewhat.

For the country as a whole, the level of returning emigres is low (12,100 recorded in the year to April 2015), but anecdotally there’s a growing number of returning advertising folk.

In an effort to boost the number of Irish emigrants returning home to the local creative industry, one agency even launched its own guerrilla stunt in Canada. The Social House headed to Toronto with a fan emblazoned with the legend ‘Go Home Irish!’ – a move that stirred up more than a little controversy given the historical connotations of such sentiments. However the edgy humour was certainly eye catching and demonstrates the lengths agencies are willing to go to capitalise on adventurous Irish advertisers who have cultivated their own global perspective.

For Susie O’Doherty at Boys and Girls, the decision to return to Ireland was inspired not by edgy campaigns but by a good old fashioned yearning for home. “The Irish love travelling. But we find it hard to stay away,” she says. “I moved to London and Melbourne to get into the advertising industry – it was 2009 and there weren’t many places in Ireland hiring. Each time you move, you build a new network and reputation for yourself. You get to know who the great agencies are, who the brave clients are and who the most talented people in the industry are – and they get to know you. Then you leave and you start all over. Eventually, the idea of setting yourself up for one last time becomes pretty exciting.”

In fact Susie’s experience echoed that of several people we spoke to, including the account exec-turned-marketing manager who began his career in London but returned to Dublin in search of a more family friendly lifestyle, and the young digital creative who went to New York in search of opportunity, but was tempted back to Ireland by his girlfriend… and was blown away by the creative vibe that had blossomed in the city in the intervening two years.

According to these conversations we’ve had, those returning home have been pleasantly surprised by the changes in Dublin’s advertising industry. They’ve found it more current, outward-looking and optimistic than the gloom-laden wounded animal of the recession years. Having time away has made the change all that more dramatic in their eyes than those of the people who remained.

For Susie O’Doherty, the booming creativity that she found on her return to Dublin was eye-opening. “The strength of creative teams in Irish agencies is what I was most surprised by. And maybe I shouldn’t have been,” she says. “West Cork is home to more artists per capita than London and Paris. The Dingle peninsula has more published authors per capita than anywhere in the world. Creativity is embedded in our Irish identity. But so too is Irish modesty. Irish ad agencies should be making more of our reputation as a creative culture as well our access to world class talent to attract more international accounts.”

Ireland has been on a wild ride, economically speaking, over the past few years. From boom to bust to the brave new world of quirky tech pioneer. Hard won positivity is flowing back to Dublin and it feels as if the local industry is on the cusp of something very special indeed. Agencies are crying out for global voices and experience – whether it’s from Irish emigres or foreign-born nationals. SO could Dublin be your next move?