Why Curtis Hougland Is Excited About the Super Bowl… in 2018. 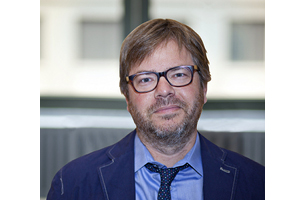 Viewing the big game in the future is more Madden than Fox TV. Football is now an immersive experience through my Oculus Rift augmented reality visor. Social feeds are virtually swatted and swiped more easily than physically clicked and installed.

I toggle my visor to choose from more than 200 camera angles. My favorite shot is the 3-D close-up of the line play between violent 300-pound men. The smell of grass and sweat seeps through the Nest fire alarm. Entering ‘groupshare’ mode, I exit my own view and join friends from our fantasy football league ‘Nerds 4 Words’, who appear next to me on a vintage Hans Wegner couch covered in red and white tomahawk avatars. I boost the gain from the stadium section occupied by Chiefs fans, and turn on parental control to block the swearing of Kansas City’s finest citizens out of respect for my son. With a gesture of the head the broadcast voices of Joe Buck and Troy Aikman are Google Translated into the voices of Mila Kunis and Luther Vandross. Cover 2 secondary coverage never sounded sexier.

My son turns on the Xbox Kinect feature on his visor. He participates in the game real-time by calling his own plays and pantomiming the plays. A statistical modeling overlay compares his performance to coach Andy Reid’s play calling and Alex Smith’s passing. He receives scores not only on his play-calling, but also his footwork, arm angle and time management. Sadly, he always betters Andy in game management. The next day my son will take advantage of the NFL’s unusually logical decision to unlock rights to in-game clips for the public. He mashes-up, hot-spots and tricks-out in-game and post-game videos. Each video averages 32,000,000+ views, but his mom won’t let him get an agent. He is 11. Phil Simms has no skills in comparison.

When his mom leaves the room, I access Cousin Sal’s Sportsbook App within my Super-App. A Super-App combines the in-app functionality of your twelve favorite apps within one seamless interface rather than 12 independent icons. According to the prop bets powered by Nate Silver’s FiveThirtyEight, the odds are 40-to-1 that the Eagles turn over the ball on their next drive, and I know in my feet that the blitz is getting to Nick Foles. The sound of Eric Berry’s interception appears in my Apple Pay account accompanied by a ‘Goin’ to Kansas City’ ringtone and an emojigif of a Derrick Thomas sack. $42 billion dollars in BitCoins changes hands that day. This is hungry business.

I check my FitBit to confirm what I already know. I need food, salty food. And salty foods demand copious beer. So, I 3-D print some Tostito’s and a pint of PBR. I boost the hops on the PBR for a bit more bite to the flavor. It is a tease. Fortunately, the Carl’s Junior ad from 72 and Sunny is showing a super model eating a double bacon onion gouda-melt with buttered ciabatta bread, and I touch it, not her, for a half-time feast. Minutes later I can feel my arteries congeal. I Facetime the local CVS to drone me some Pepto-Bismol, because it is still illegal to print meds. Because, well, it should be obvious why it is illegal to print meds.

At halftime the commercial extravaganza begins. My son loves the feature by which he can place himself and his friends’ faces into the ads themselves. This function makes ads more memorable and personal. He buys a Snickers and an avocado from Mexico with a swipe. The ads are wildly successful, because the user sits at the center of the experience. And like the rest of America, we vote on our favorite ads in real-time. FitBit reports our physiological response to the commercials to keep the process honest. Instead of the blather of pundits and experts, quantitative data on purchase intent and brand preference dominate the next day’s reporting. Winners and losers are calculated in real-time. Mophie wasted $4m for a Super Bowl ad on its dystopian spot AGAIN. BMW crushed it with its I-Drive commercial, and they are only too happy to pay the performance fee to Facebook NBC as the game’s top ad. Finally, business understands that the entire phenomenon of the social media movement is that the user is in control.

I had tickets to the game through my ‘Starwoods Social’ loyalty program. But why on earth would I go to the game? My i-Barcalounger is a charging, printing and viewing station. The ghost of the late @BillSimmons would have agreed. Sadly, Simmons passed away, when a mob of virtual Twitter users attacked him during his reappearance on NBA Countdown.

If you die in a dream…

Clearly, this is a dream, because the Chiefs are in the Super Bowl.

But that does not mean it will not come true.

Curtis Hougland is CEO at Attention

Disclaimer: BMW is a KBS client, parent company of Attention.