Behind the Work
1.3k 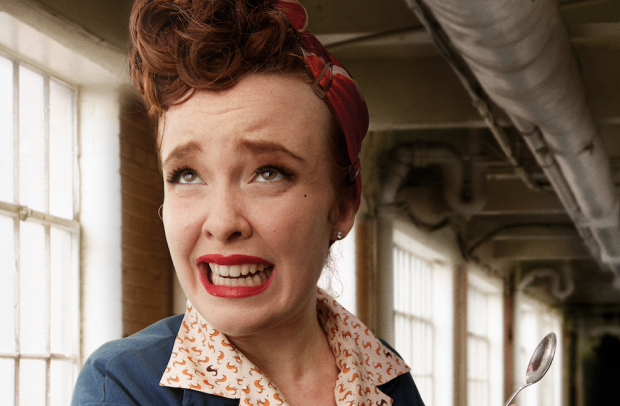 Since 1919 Buckley's, an iconic Canadian cough and cold mixture, has lived up to its promise that it tastes awful and it works. And, given the winter weather in the northern climes of Canada, a cold medicine that works is important.

To celebrate the 100th anniversary of the brand, GSK Canada - which owns Buckley's - and Saatchi & Saatchi Canada have launched a campaign that shows just how those awful-taste faces have looked over the past century. That's right - 101 ads that take Canadians all the way back to the beginning of Buckley's, one awful-tasting spoonful at a time.

The campaign is in-market for two months, dominating full subway train interiors along Toronto’s busiest subway line (Yonge/University) for the next four weeks, and creating digital initiatives that drive people to the Buckley's website which hosts an interactive gallery that enables Canadians to engage like never before.

LBB> This project is pretty wild. What was the initial brief like from Buckley's? And what were your initial thoughts that led to the campaign?

Brian> The brief, in short, was to celebrate the brand’s 100-year anniversary by reminding Canadians that over the past century, the one thing that hasn’t changed is that Buckley’s tastes awful and it works. Because the visual of people making a face when they taste Buckley's is such an integral part of the brand's identity, the team focused there. There were a lot of great ways into that, but as soon as this idea came up we pretty much knew we had the one. 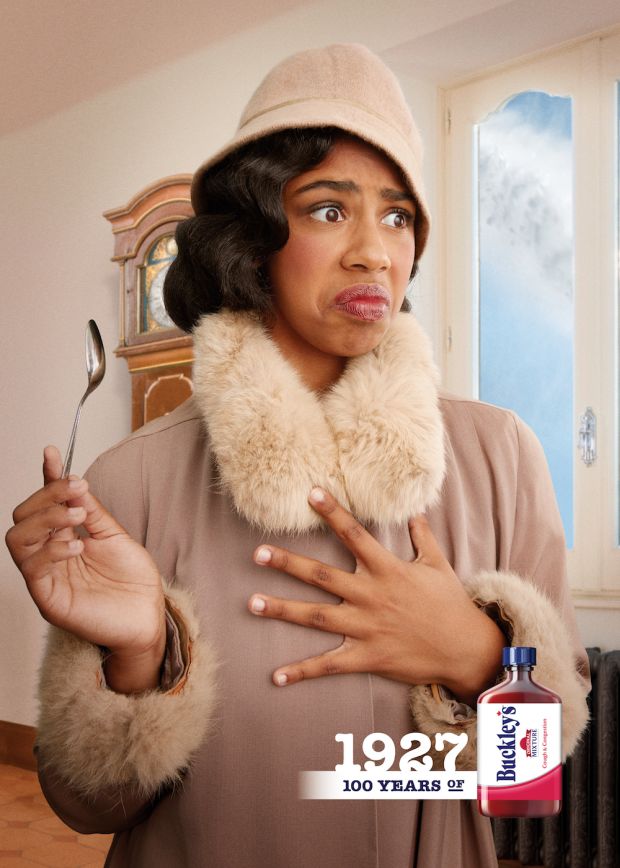 LBB> Can you tell us about Buckley's and its importance in Canadian society?

Brian> Few domestic brands in this country have the same equity, recognition and respect that Buckley's has. Fewer still have been going strong for 100 years. Say the word 'Buckley's', and most Canadians will answer with the brand's long-running tagline 'It tastes awful. And it works.' It really does taste awful. And it really does work. That matters in a cold climate like ours that has a tough cold and flu season. Buckley's is no-nonsense, tells-it-like-it-is medicine, and Canadians value that kind of honesty. And for an over-the-counter pharma brand, it has always staked out more of a humorous, irreverent tone than other cough and cold medicines, which has also endeared it to Canadian consumers over the years.

LBB> What can you tell me about the idea of creating an ad for each year that the cough mixture has been used? Why do 101 when you can just do one?

Brian> The creative team (GCD/writer Rob Gendron and ACD/art director Craig Brandon) knew they wanted to cover the history of the brand in an impactful way, but a lot of the single executions we looked at simply stated that Buckley's has been around since 1919. This idea demonstrated it, in a way that only this brand could. Showing every year over the past century wasn't just fun from an execution standpoint - it got to the heart of the brand's truth that it has always tasted awful and that year in and year out, Canadians have depended on it to make them feel better, no matter what. 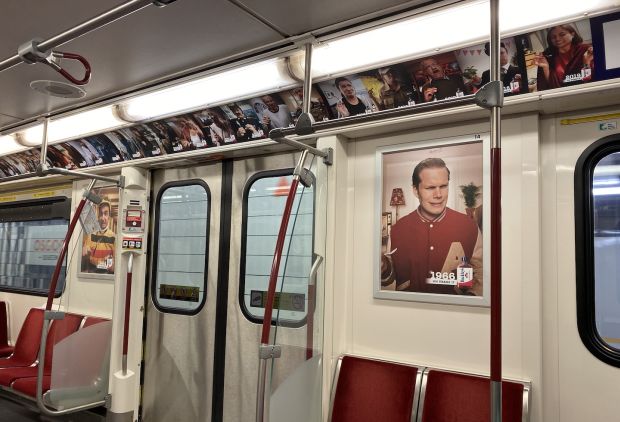 LBB> What was the process like of creating each one? They all have a story attached to them - what inspired each of them? Are they true or not?

Brian> This started with a lot of research. The team looked for high points in Canadian history to provide backdrops for each year. That led to the determining of the various characters and backstories. From the Depression to World War Two to Expo67 to Y2K to today, the team was able to find distinctly Canadian stories as settings, and yes they are all based on actual events or cultural moments. Then it came down to casting, wardrobe, hair and makeup, and finding all the subtle little details about what made each year special. The team then shot all of the talent in character, and the backgrounds were then married to them in post. Photographer Dave Todon and the team at Instil Productions did an incredible job on everything from matching the lighting to the final retouching. 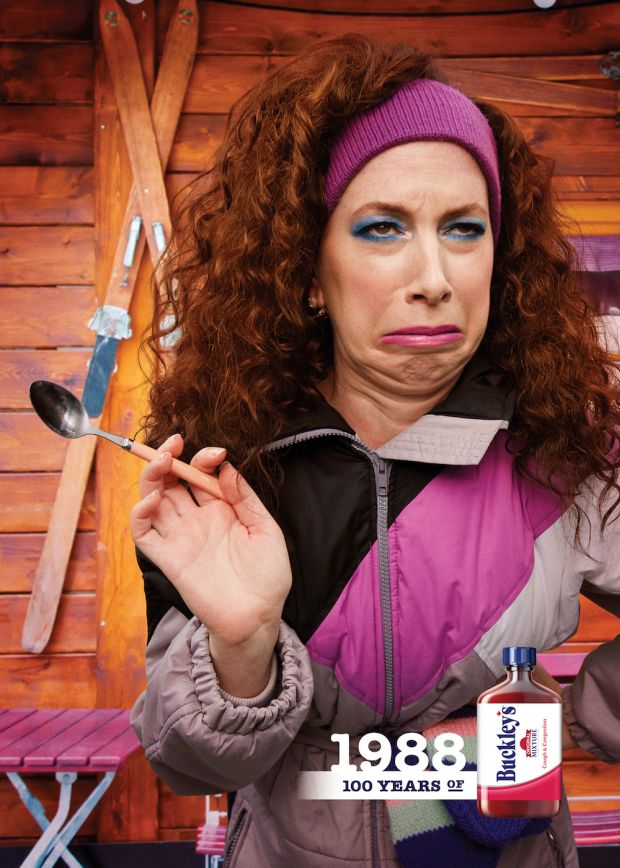 LBB> How did you reflect the time period in each ad?

Brian> It largely came down to casting, wardrobe, makeup/hair, and the settings. One decision the team made early was that they would not try and mimic period photographic styles - no sepia tone, black and white, Kodachrome or other heavy kinds of era-specific film looks. That helped the team just focus on getting great shots, and it also helped unify the campaign.

LBB> How was it for you personally to look back into history for the campaign?

Brian> I'm a pretty huge history buff, so seeing how styles and looks changed from year to year was pretty great. There was that first moment when the team lined up all 101 ads side by side, and it was pretty incredible to see a whole century laid out before us. 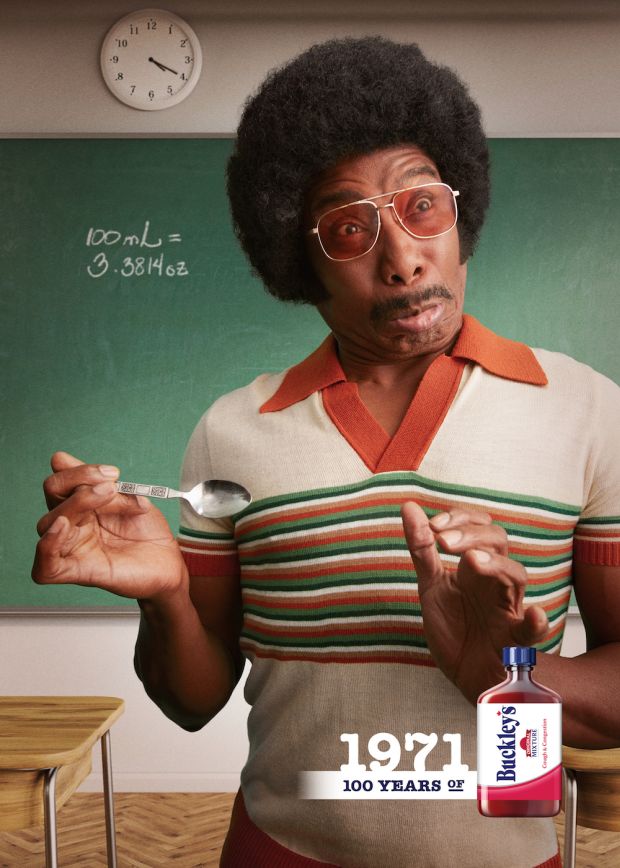 LBB> Do you have a favourite execution from the 101 ads?

Brian> That is a tough one. Everyone who worked on this has their favourites for sure. Bust Dust bowl grandma (1933), bomb girl (1943) and physics teacher (1971) get a lot of mentions.

Brian> The attention to detail was staggering. Casting 101 different faces, and getting the right mix of looks, characters and diversity - that alone was a major achievement. Then arranging the shooting schedule for 101 talents and getting them to the studio on time - just doing that was its own project. I believe this shot for 15 days straight, and the team literally worked on the pre- and post-production for months. On top of the creativity, this also came down to discipline and hitting the schedule – we had great agency account management (John McCarter) and our producers at the agency (Bill Ing and Carlene Allen) kept this thing on track like a well-oiled machine. It goes without saying that we also had a great client on this (Jeff Leeming, senior brand manager at GSK) who got behind this idea from the beginning in a big way, and who was a true partner on every part of the project. 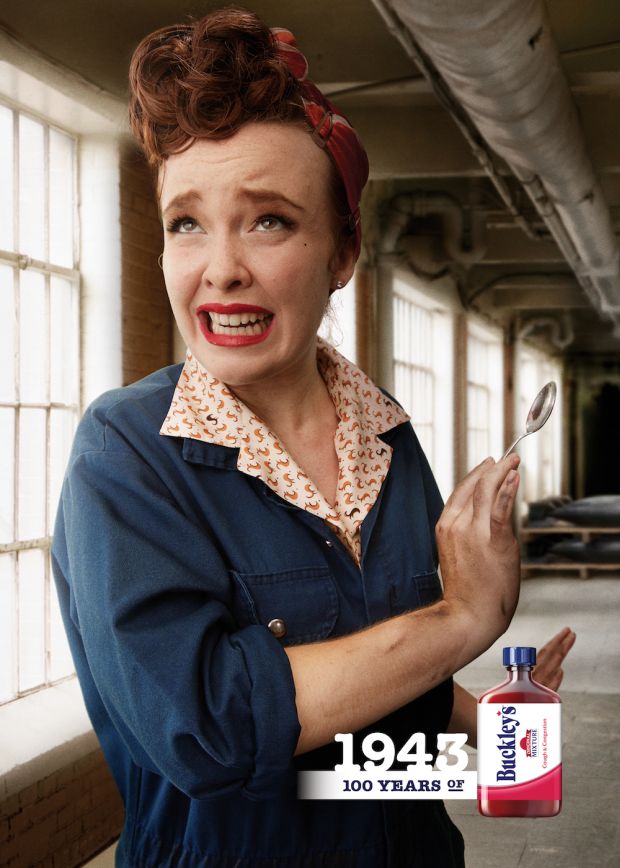 IP
view more - Behind the Work