Why Beautiful, Human-Centric Design Will Unlock the Internet of Things 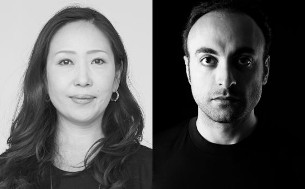 Japan and Italy: two countries with strong and elegant design cultures that reach back centuries. So it should be of no surprise that the two are coming together to take us into the future.

Tokyo innovation lab \QUANTUM (a stand-alone subsidiary of TBWA\Hakuhodo) and Milan- based design group Habits Studio have joined forces to bring human-centric, beautiful design to the Internet of Things (IoT). Thus far the IoT phenomenon has been either fairly functional (smart thermostats), hidden deep in industrial supply chains or flat out weird (Hello Barbie…). It’s been adopted piecemeal manner. The teams at QUANTUM and Digital Habits, Habit Studio’s innovation platform, hope that by joining forces they will be able to bring a different perspective.

Futaba Maehara, General Manager at \QUANTUM explains: “IoT is the area where tech companies have been driving the market so far. When it comes to tangible products, we believe that human-centric approach is vital in this field. Through creative thinking and constantly questioning ourselves on how IoT could enhance our lives and our communities, this is where \QUANTUM could play a key certain role because our origin is from a creative ad agency background. We have TBWA\HAKUHODO's philosophy of ‘Disruption’ and ‘Human Centred Open Innovation’ as our core foundations, and on top of that we have business design and product development expertise within \QUANTUM. We believe exploring new ideas from diverse viewpoints is essential, as well as making sure that the storytelling part of IoT experiences is shown in a new, exciting and meaningful way.”

Innocenzo Rifino, the Founder of Habits Studio, agrees that human behaviour and relationships with technology are the key drivers, rather than the technology itself. “IoT in our vision is not automation but human, consistent action. The idea can be imagined as a recursive and meaningful interaction between the actors: human interaction, (big) data, computing, product reaction,” he says.

The relationship first came about when Habit started to work with \QUANTUM’s Chief Designer, Rosa Uchima. By 2015, \QUANTUM had founded its own brand, QM, and started to collaborate with Digital Habits. The first joint project was a lighting installation called ‘Another Moon’, which reflected the waxing and waning of the moon’s cycles in real time. 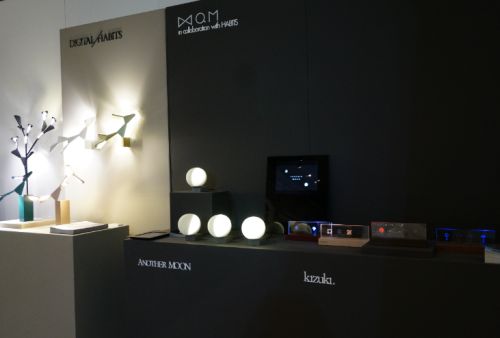 “Habits Studio instantly empathised with our vision and we started discussing the look and the feel of the product and that kind of user experience the product should give. The transition to partnership was quick and smooth and there was great chemistry between us throughout the process,” recalls Futaba.

The idea is one that exemplifies the philosophy behind the collaboration. “In our busy lives, we tend to forget to just take a moment and look up at the moon – or we simply cannot watch the moon from your windows because of tall buildings,” says Futaba. “With Another Moon, we wanted to make ourselves remember that as human beings we are also part of a nature cycle, and we should stop and appreciate the simple passing of time.”

It’s also an article of proof for the relationship too. The idea came out ‘from one bright mind among others’ during a brainstorming session, as Innocenzo puts it – and that ‘bright mind’ was Futaba. They had been exploring ways to enhance people’s sense of nature when at home in an urban environment.

The production and creation of Another Moon wasn’t particularly challenging or groundbreaking in terms of the technology underpinning it, but required a great deal of research and experimentation to make sure the design elements came together to create an object full of wonder. The surface and texture of the moon, for example, was the focus of much in-depth research.

Indeed for Innocenzo, the Internet of Things involves a peculiar challenge for designers.

There are many factors to consider – behaviour, interaction, shape, texture, perception, ambient effects, interfaces, graphics, data feeds and more – and the designer must ensure that there is consistency across all of these areas.

Since Another Moon, the partnership between Digital Habits and \QUANTUM has become more formalised. Innocenzo and his team flies to Asia once a month, as well as collaborating remotely. An object may be designed in Milan and prototyped in Tokyo, or vice versa.

This international perspective has been an important one for Futaba as she pushes \QUANTUM into the future. “Through experimenting and working with Habits Studio on this project, we realised that partnering up with global design firms would enrich and strengthen our products with a broader perspective, especially at a time when both businesses and markets are becoming more global.”

And, though now based in Italy, Innocenzo has also felt the benefits of immersing himself in Japanese design culture. In 2000 he moved to Osaka to take part in a graduate scheme at Panasonic, an experience which has stayed with him. On a professional level, the effort and cooperation that occurs in Japanese businesses was inspiring. And on a personal level, he soaked up Japan’s design culture.

“I used to live in a house surrounded by a sort of small bamboo forest in the suburbs of Osaka. The elongated leaves let through very natural shadows. That house design was aimed to keep the contact with nature even though in the middle of a huge metropolitan area. At the same time I remember I was involved in an internal exhibition at Panasonic and, for the first time, encountered an anthropomorphic robot. Well the anecdotes exemplify the fragile but charming balance between tradition and progress, story and foresee, simplicity and computing, lightness and mechanics. I deeply learned this ambivalence expressed in Japanese material culture and design,” says Innocenzo.

Comparing Japan with his homeland in Italy, he sees that both countries have an ingrained ‘maker’ culture, with strong manufacturing. While both countries’ 20 th century design could be characterised as an elegant simplicity, traditionally, he says, Italy’s lack of resources drove efficiency whereas in Japan the motivation is based on performance and the intrinsic quality of the article.

As for Futaba, she agrees that both countries have much in common, but suggests that increasingly design preferences are less about nationality and more about mindset. And this is typified by the \QUANTUM and Digital Habits collaboration on the IoT.

“I think Italy and Japan have much in common in their attitudes towards design. Both countries respect craftsmanship, elegance, detail, and value authentic histories. Today, the preferences of customers are not explained by their country of origin, but rather by lifestyles, and in this sense, we hope our collaboration will empower our engagement with people globally.”

6 Things We Learnt From Cannes Lions Unlocked
View all News