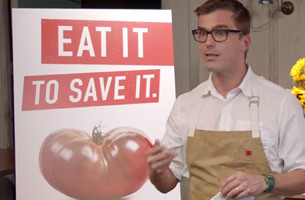 Hosted in Atlanta with chef and restaurateur Hugh Acheson, the event invited foodies to a once-in-a-lifetime dining experience: the chance to taste endangered species. Curious diners were surprised when it was revealed that the endangered species in question were not animals as they suspected, but in fact the Cherokee Purple Tomato, identified as an endangered flavor.

As part of the brand’s overarching campaign, “Save the Flavors,” the event launched the Flavor Availability Index, created in partnership with Tufts University, to reinforce the brand’s message about preserving heirloom seed varieties and encouraging people to plant these limited and scarce foods.

SEEDS OF CHANGE wants to inspire consumers to grow vegetables that are becoming extinct and to enjoy these great flavors with their favorite SEEDS OF CHANGE meals.