Why Are These Poetic Animals So Eager to Be Hunted? 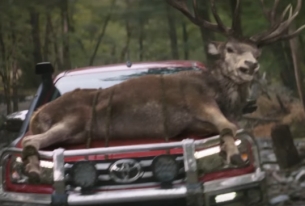 Saatchi & Saatchi New Zealand has unveiled the latest Toyota Hilux campaign featuring a cast of passionate, poetic animals, as they are transported on an all-new Hilux.

The spot will premiere on Toyota’s social media channels today and will launch officially with a full page ad in the Sunday Star Times, directing people to watch the full 90 film at 7.30pm this Sunday on TVNZ.

Corey Chalmers, Joint ECD said: “Toyota has a long and rich history of creating iconic advertising around its much loved ‘ute’. From the days of Scottie and Crumpy, to the controversial but adored ‘Bugger’ commercials, to more recent campaigns featuring talking Bulls and sidecar-riding monkeys. Being given the opportunity to create the next chapter for Hilux is a real privilege and a huge honour.”

Guy Roberts, Joint ECD added: “Creating this campaign for Hilux has been an incredible labour of love, delivered by an amazing team. We hope that people enjoy it and it sells the heck out of this bloody great new ute.”

Hilux is the work-horse of heartland New Zealand and has set the benchmark for light trucks since its launch in 1976.

Andrew Davis, General Manager Marketing, Toyota said: “This ute continues this legacy and also delivers on the increasing urban appetite for utes and Kiwi’s love of the great outdoors, so it was important that the latest campaign spoke to this emerging group of city dwellers.  We presented Saatchi & Saatchi with a significant challenge in continuing the Hilux story, and we are excited with the final result which resets the benchmark and befits the legacy of Hilux.”

The TV Campaign was directed by leading New Zealand Director, Adam Stevens from Robbers Dog. The epic film was shot on location in the Reece valley in the Southern Alps amongst other New Zealand landscapes.

Each of the animal characters including ducks, fish, deer, possums and whitebait are all CGI creations, brought to life through animation and visual effects by Alt.vfx.