Why Are these Little Princesses Intent on Filling Up the Swear Jar?

Editors' Choice: Admit it, kids swearing is funny - but this video for FCKH8 has a serious message 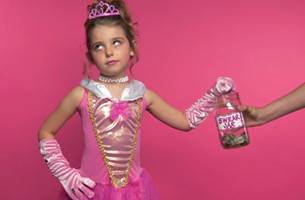 Facing a future where women are still paid 23% less than men for the same work, and where 1 in 5 women are raped or sexually assaulted in gender-based violence, little girls between 6 and 13 years-old dressed as pretty pink princesses drop F-bombs to draw attention to society’s continued sexism. Asking the question, “What’s more offensive? A little girl saying fuck or the sexist way society treats girls and women” these adorably articulate little ladies in sparkling tiaras turn the “princess in distress” stereotype on its head and contrast the F-word with words and statistics society should find shocking such as “pay inequality” and “rape.” The video also features a 12 year-old boy wearing a pink gown standing up against sexism saying, “When you tell boys not to ‘act like a girl,’ it’s because you think it’s bad to be a girl.”

“Women make 23% less than men for the exact same fucking work. I shouldn’t need a penis to get paid.”

“Stop focusing on the way I fucking look and give me a book. My aspirations in life shouldn’t be worrying about the shape of my ass.”

“One out of five women will be sexually assaulted or raped by a man. Stop telling girls how to dress and start teaching boys not to fucking rape.”

The girls appear along side women in the video sporting T-shirts with bold pink text declaring “Girls Just Want to Have Fun-damental Rights” and “This is What a #Feminist Looks Like.” The video is part of advocacy T-shirt company FCKH8.com’s charity T-shirt fundraising effort. The group’s website is making tees available starting at $15, with $5 from each tee sold benefiting five anti-sexism organizations and projects and asks website visitors to suggest their favorite groups to benefit.

Video producer Mike Kon comments, “Some adults may be uncomfortable with how these little girls are using a bad word for a good cause. It is shocking what they are saying, but the real shock is that women are still paid less than men for the same work in 2014, not the use of the F-word. The big statistic that 1 out of 5 women are sexually assaulted or raped is something society seems to find less offensive than a little four letter word and we love how these girls draw attention to that imbalance.” He added, “Instead of washing these girls’ mouths out with soap, maybe society needs to clean up its act.”