Who Were the Winners at Day Four of Cannes Lions? 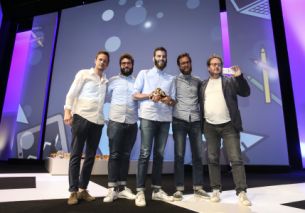 In the third awards show of the week, winners of the Creative Effectiveness, Design, Outdoor and PR Lions were announced, alongside Product Design and the new Digital Craft Lions. From boundary-breaking ideas to the technical mastery behind products, world-class creativity took centre stage.

A record-breaking 540 entries were received for Product Design and 11 Lions were awarded. The Grand Prix went to “Jacquard” for Google, by Google Creative Lab, London. “To a product designer, material is everything and Jacquard allows us to dream up solutions in nearly every segment of our industry, from medical design to furniture and even social and environmental sustainability,” said Jury President, Amina Horozic, Lead Industrial Designer, fuseproject.

Winners of the new Digital Craft Lions, carved out of the craft categories from the Cyber and Mobile Lions, were also announced. Celebrating the skill and artistry in omni-channel digital creativity, from desktop to mobile to virtual reality, there were 1,148 entries from which 50 Lions were awarded.

The inaugural Grand Prix went to “Because Recollection” for Because Music by 84.Paris, France - work which Jury President, Wesley ter Haar, Founder & COO, MediaMonks, described as a perfect way to launch the Lion. “It combines best-of-breed craft across categories, and opens up a decade of musical magic in a way that only digital can do. It is a celebratory piece, and reminds us of the great work that made us fall in love with digital craft, while simultaneously showing a way forward.”

Design received 2,856 entries and 104 Lions were awarded. The Grand Prix went to “Life is Electric” for Panasonic, by DENTSU INC, Tokyo, which was chosen for its creative bravery. “This special work embraces the paradox of integrating traditional values with technology. It shows that when used with agility, technology becomes a creative springboard that brings new meaning to design and pushes its boundaries further,” said Jury President, Tristan Macherel, Executive Creative Director, Landor.

From 5,367 Outdoor entries, 129 Lions were awarded. The Grand Prix went to “Brewtroleum” for Heineken New Zealand, by Colenso BBDO. Jury President, Ricardo John, Chief Creative Officer of J. Walter Thompson, said, “Brewtroleum proved that outdoor has no boundaries. To make gas out of beer? That's unbelievable! It proves that agencies are going deeper and solving clients’ business problems with creativity.”

Finally, from a total of 2,225 entries in PR, 84 Lions were awarded. The Grand Prix went to “The Organic Effect” for Co-op by Forsman & Bodenfors, Sweden. “We wanted to find a winner that truly earned attention and was social by design - one that was driven by a simple but powerful idea and delivered stellar results,” said Jury President, John Clinton, Chair, Canada, North American Head of Creative and Content, Edelman.

Throughout the day, the Cannes Lions stages were alive with enlightening discussion from star names, including Anna Wintour, Will Smith and Usher. Lions Innovation, a specialised two-day event, kicked-off with sessions exploring technology and data as catalysts for creativity. Highlights included: Once upon a time in the world of data creativity, hosted by Quantcast and Pixar; and Future Society: will our industry lead or follow? Hosted by Isobar and WIRED.