Who Were the Big Winners at the UK Music Video Awards? 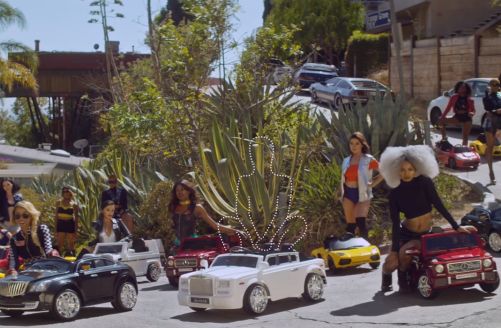 The makers of the greatest and most creative music videos of the past year were honoured at the 10th annual UK Music Video Awards, which took place last night (Thursday October 26th) at the Roundhouse in Chalk Farm, London, hosted by Adam Buxton.

The biggest winner on the night was a video that turned adversity into a triumph. US director Ryan Staake’s video for Young Thug’s Wyclef Jean nearly didn’t happen when the artist failed to show up for the shoot, but Staake’s resourceful production and ingenious editing delivered an unforgettable video for the artist which was named Video of the Year as well as winning the Best Editing, and Best International Urban Video trophies.

Kendrick Lamar, one of the most nominated artists at this year’s Awards, was named Artist of the Year. He accepted the award via a personal video message. Meanwhile, in a big night for British music videos, alt-j’s 3WW won Best Alternative Video and Best Cinematography for director Young Replicant and DOP Dustin Lane, and Bonobo’s No Reason was awarded Best Dance Video and Best Production Design for director Oscar Hudson and production designer Luke Moran Morris. Hudson, who won the Best New Director award in 2016 was also honoured with this year’s Best Director trophy.

In the Pop categories, Dua Lipa’s New Rules triumphed among the UK videos, while Haim’s Want You Back took the International award with US director Jake Shreier collecting the trophy. Other international directors who took awards include Barcelona’s CANADA for Beck’s Up All Night, and France’s The Blaze, who directed their own video for Territory. British directing team The Sacred Egg won the UK Rock/Indie Video trophy for their work on Royal Blood’s Lights Out and Hector Dockrill took the UK Urban Video award for Ray Blk’s Patience.

The Best New Director award was won by Matilda Finn for her work with Danny Brown, Bicep and Obongjayar which also won her the Best Newcomer trophy for Dance Video. Best Commissioner was won by Polydor’s Semera Khan for a body of work that includes big-hitting videos for Haim, Lana del Rey and Mick Jagger.

British animators celebrated a successful night with Chris Hopewell taking the award for Best International Rock/Indie Video for his video for Father John Misty’s Things It Would Have Been Helpful To Know Before The Revolution, and Bristol-based animation team Karni and Saul won the Best Animation category for their moving promo for Katie Melua’s Perfect World.

British director Jake Nava was presented with this year’s Icon Award.  He is celebrated for his iconic work with some of the biggest names in pop on both sides of the pond, including Beyoncé, Lana del Rey, Pink, Kelis, Mark Morrison, Kylie Minogue, Mariah Carey, Britney Spears, Arctic Monkeys, Emeli Sande and Adele among others. Tributes on the night came from Beyoncé, Kylie, Emeli Sande and Alicia Keys.

In the live music categories, previous Icon Award winner Jonas Akerlund triumphed with his live concert film for Rammstein: Paris, while in the shortform category French production team La Blogothèque took the gong for their film for Mura Masa and Damon Albarn’s Blu. The Best Interactive Video category was won for an unprecedented third time by French director Romain Chassaing for his work with Naïve New Beaters for Words Hurt. The Vevo MUST SEE Award went to Sam Bailey for Marika Hackman’s My Lover Cindy beating off competition from Jay-Z, Kendrick Lamar, Young Thug, Dua Lipa and Charli XCX.

The UK Music Video Awards editorial director, David Knight, says, “More than ever, music video is the place where musicians collaborate with filmmakers to create astonishing works of creativity. The winners and nominees at the UKMVAs have demonstrated that with their exceptional work in the past year.

“Music videos are more creative than ever, more diverse and eclectic than ever, better than ever.”

HAIM - Want You Back

Beck - Up All Night

Lemon Twigs - I Want To Prove To You

Best Interactive Video in association with The Mill

Mick Jagger - Gotta Get A Grip

Best Producer in association with WPA

Best Director in association with Locomotion

Video of the Year in association with Promo News