Who Were the Big Winners at Last Night's D&AD Awards? 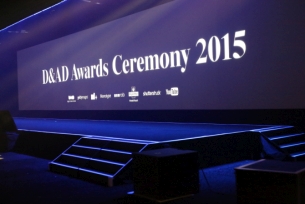 For the second year running, the Black Pencil jury also handed out honours to work in the White Pencil category. This year Leo Burnett Toronto, London, Chicago and Holler were recognised for their ‘#LikeAGirl’, the celebrated campaign, which sought to change negative perceptions of the phrase ‘Like a girl’.

Following a greater than 50% increase in White Pencil category entries, a record four White Pencils were awarded by the White Pencil jury – the highest in the awards’ history, doubling last year’s figure of two and signalling a bumper year for creativity for social good.

‘LEGO: Everything is NOT awesome’ by Don’t Panic London (Advertising & Marketing Communications - Not for Profit) - UK

‘This Is Wholesome’ by Droga5 (Advertising & Marketing Communications - Brand) - US

D&AD has grown in 2015. The addition of two new Pencils (Wood and Graphite replacing ‘In-Book’ and ‘Nomination’ respectively) has facilitated a record number of entries into this year’s annual, with 847 projects from 44 countries achieving D&AD’s legendary standards.

While the pursuit of excellence has been well awarded by the 2015 jurors (207 entries received Graphite Pencils and a further 587 entries received Wood Pencils) two of D&AD’s highest accolades, the Yellow and Black Pencils (the latter reserved only for creative perfection), have been more difficult than ever to win this year, with just 44 Yellow and 5 Black Pencil winners.

‘#LikeAGirl’ by Leo Burnett Toronto, London, Chicago, and Holler was the campaign that won the most pencils overall, with two Yellow Pencils, three Graphite Pencils and two Wood Pencils in addition to their Black Pencil.

Tim Lindsay, Chief Executive of D&AD commented: "The introduction of our new Pencil levels - Wood and Graphite - has clearly made an impression. Our judges were happier to award brilliant work, and we’re going to have our thickest ever Annual as a result.

"Inversely, they now regard Yellow as an even tougher accolade. Personally I’m delighted that White Pencil work is now a central pillar of the awards."

On the night, R/GA was crowned Most Awarded Advertising Agency, with two Yellow Pencils and a string of Graphite and Wood Pencils for its work with clients including Beats By Dre, Google, Hammerhead Navigation and Equinox.

Design Bridge claimed Most Awarded Design Agency, Procter & Gamble was recognised as Most Awarded Client, and Somesuch & Co. walked away with Most Awarded Production Agency, winning a Yellow Pencil for ‘The Otherside’ for Honda, one of the year’s most talked about campaigns.

The United Kingdom topped the tables again with 229 Pencils in total, including seven Yellow Pencils and two Black Pencils. The US followed up in second place bagging one Black Pencil and equalling the UK’s seven Yellows.

Across the world, Japan led in Asia once again with 47 pencils including 5 Yellows, while Germany weighed in with 44 Pencils and France with 37 Pencils to mark a great year for Europe. Meanwhile Australia celebrated another strong year with 39 Pencils, just beating its 2014 figure of 37.

Brazil, in fourth place overall and topping Latin America, bagged 44 Pencils including three Yellow Pencils. Perhaps the most exciting development was China’s 21 Pencils - up 300 percent from just five awards in 2014.

Margaret Calvert, the celebrated co-designer of Britain’s iconic motorway signs and RCA tutor, was honoured with the President’s Award.

Selected by the incumbent D&AD President, Mark Bonner, Calvert moved from South Africa to Britain in 1950 to study at the Chelsea College of Art. In 1957 she was hired by Jock Kinner to redesign the road sign system. She came up with simple, easy-to-understand pictograms, including the signs for 'men at work' (a man digging), which revolutionised public signage in the UK.

Margaret taught multiple generations of designers at London’s Royal College of Art. Alumni who studied under her include founders of some of Britain’s best-known design studios - Graphic Thought Facility, Why Not Associates, GBH, Jonathan Barnbrook and Daniel Eatock.

D&AD President Mark Bonner said: "Margaret perfectly embodies all that is important to D&AD; combining excellence with education to inspire young creatives across the disciplines.

"I know, because she taught me. Thank god I listened! She has inspired a who’s who of young, fortunate, and now successful creatives from all over the world during her 35-year association with The Royal College of Art. Her legacy is some of our industry’s greatest talents."

Next Photographer and Next Director Awards

Winners for two new awards, separate to the Professional Awards, were also announced.

The Next Photographer Award, created in partnership with Getty Images to find the best new photographers and promote them back to the creative industry, was won by Brooklyn-based photographer Jeff Brown.

The Next Director Award, created in partnership with YouTube and MOFILM to unearth the best new directorial talent, was given to Vania Heymann for his music video Mayokero.

Sean Thompson from the Next Director Award Jury, said of the Jerusalem born and raised director: ‘He isn’t afraid of doing the ridiculous. I love that. It’s so nice to see a simple fresh idea brought to life in film. The director does well to not add anything unnecessary and executes with excellence in this beautiful music video."