Who Were the Big Winners at Eurobest 2014?

UK takes narrow lead over Germany as most awarded country 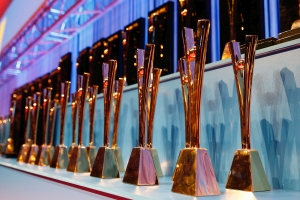 Eurobest, the European Festival of Creativity, has tonight announced the winners of the 2014 awards. The UK has taken home 75 trophies, not only its greatest Eurobest haul to date, but also ranking the country as the most awarded this year. Germany follows with 71 awards and then France with 58.

Volvo Trucks, this year’s Advertiser of the Year, has taken an impressive six awards, one of them a Grand Prix, which according to chairman of Lions Festivals Terry Savage, “adds huge resonance to the fact that they have been presented with the Advertiser of the Year accolade tonight.” He remarked that the company’s wins had “well and truly marked their place as a brand that is incredibly creatively brave.”

Commenting on the work that he’s seen as jury president, Rob Reilly, Global Creative Chairman, McCann Worldgroup, said, “There is some fantastic work in both the Film and Print categories, along with some wonderful craft. Where the real opportunity lies for Europe is in the Integrated category. The best ideas are the ones that surprise you in different ways and in different places. It's hard to do but when it is done well, it does so much more than just winning an award.”

Other awards presented at the ceremony were:

The inaugural Media Network of the Year was awarded to Starcom MediaVest Group, with PHD in second and OMD taking third.

Agency of the Year was given to adam&eveDDB London. The Cyranos McCann Barcelona took second and Forsman & Bodenfors Gothenburg were in third place.

The Eurobest Golden Palm, given to the most awarded production company, was presented to Folke Stockholm with Academy Films London taking second and MJZ London third.

Independent Agency of the Year went to Forsman & Bodenfors Gothenburg. Runners up Kolle Rebbe Hamburg were in second place and Jung von Matt Hamburg in third.

The Network of the Year award was presented to DDB. Second place went to Publicis and third to McCann.

Philip Thomas, CEO of Lions Festivals, said that “with over 2,200 people in Helsinki for Eurobest, it had been a fantastic and inspiring Festival with winning work that had truly showcased Europe’s ability and innovation in the field of creativity.” Louise Benson, Festival Director for Eurobest added that after such a successful three days in Finland she was now “excited to be bringing the 2015 edition of Eurobest to Antwerp next year.”

All of the winners will be available to view on www.eurobest.com from today, Thursday 4 December 2014.