Who Were the Big Winners at ADFEST 2016's Lotus Awards? 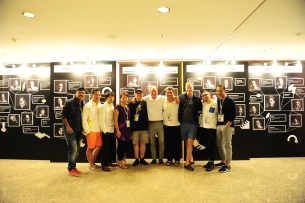 The winners of the Interactive, Mobile, Print Craft, Design, Direct, Press, Outdoor, New Director and Film Craft Lotus were announced at the end of the third day of the 19th ADFEST, held at PEACH, Royal Cliff Hotels Group in Pattaya, Thailand. Click here to view the full list.

Grand Jury President of ADFEST 2016 Jeremy Craigen, Global Chief Creative Officer of Innocean Worldwide, applauded this year’s entry work: "Overall I was really pleased with the standard of work here at ADFEST. From traditional media like print and film through to the INNOVA Lotus category, the work continued to amaze and surprise me. The real highlight for me, however, was judging for the Lotus Roots. Here, I thought the work was exceptional and totally unique to this part of the world."

This year there were 181 entries for Interactive Lotus. Interactive and Mobile Jury President Valerie Cheng, Head of Creative Shop of Facebook South East Asia, Singapore said, "Great work and brands move not just the minds but also the hearts. The big winners of this year have demonstrated how complex technology can be applied so effortlessly to be useful yet entertaining at the same time. I am extremely excited for our region and the future it holds."

29 awards were announced, including 11 Bronze, 10 Silver and 7 Gold. The Grande Lotus was awarded to McCann Melbourne for Melbourne International Film Festival’s ‘The Emotional Trailer’, taking away 2 Golds in the same Category.

Mobile Lotus received 50 entries. There were 12 awards given in the category, including 3 Bronze, 5 Silver and 3 Gold Lotus awards.

The Print Craft categories where the three Gold awards were given were:

Design Lotus received 239 entries. There were 29 awards given in the category, including 4 Gold, 9 Silver and 15 Bronze. Design & Print Craft Jury President, Yoshihiro Yagi, Creative Director of Dentsu Inc., Tokyo said, “Overall, I think that the design in Asia is not only cool and smart, but also gives you a warm and human-like feeling.”

Four Gold trophies were awarded to :

Direct Lotus received 213 entries. There were 35 awards given in this category, including 15 Bronze, 13 Silver and 6 Gold, plus a Grande Lotus award.

The six Golds went to:

Direct Jury President, Chief Creative Officer & China Network Creative Consultant, ADK Taiwan Richard Yu commented, “The judging process was like a creative idea exchanging seminar for Asian countries, everybody was actively expressing their own opinions while respecting those of others. It was a wonderful judging experience.”

From 226 entries in the Press category, there were 17 Lotus trophies awarded including 4 Bronze, 12 Silver and 1 Gold. There was no Grande Lotus given out for this category at ADFEST 2016.

Outdoor & Press Jury President, Chee Keong (CK) Tan, Group Executive Creative Director of Ogilvy & Mather Malaysia, Kuala Lumpur said, “Press is a tough category, and I wished there were more breakthrough ideas. However, The craft has been amazing as usual. I believe we have the talent to push this category forward.”

The only Gold trophy was awarded to ‘A Cream that Gives You Wrinkles’ by Colenso BBDO, Auckland for Breast Cream in Public Services & Cause Appeals.

329 entries in the Outdoor category make it the second largest awards category at ADFEST 2016. There were 25 Lotus trophies awarded including 9 Bronze, 14 Silver and 1 Gold.

The Grande Lotus for the Outdoor category went to Hakuhodo Kettle Inc., Tokyo’s ‘Shell We Move?’ for Suumo in Ambient: Small Scale.

The one and only Gold was awarded to Hakuhodo Inc., Tokyo for Guerrilla Marketing work ‘Wearable Tomato’ for Tomato.

Outdoor & Press Jury President CK Tan explains, "The quality of the entries were good across Asia. There was some impressive outdoor work from Japan. The work coming out from China was also commendable. Good show overall."

There were 13 entries received for New Director Lotus including the Fabulous Four this year.

Jury President of Film Craft Lotus & New Director Lotus, Sihabutr Xoomsai, Film Director of Triton Film, Bangkok said, “We were a little disappointed by the small amount of work that was submitted but not by the quality of the young directors' work. There is definitely room for improvement on how to encourage and engage directors to voice their own work at an important awards show like ADFEST. ”

Two Bronze Awards were given out to:

- Short Film ‘A Drop’ by The Post Bangkok Co., Ltd for their own branding

The category with the most entries is Film Craft Lotus with 441 entries. There were 27 winners in the category, including 8 Bronze, 14 Silver and 5 Gold Lotus Awards. No Grande Lotus was awarded for the Film Craft category.

Film Craft & New Director Jury President, Sihabutr Xoomsai states, “Seeing work from around the region and how each culture is crafted into each film is very exciting. It's interesting to see how each country used their unique resource and embedded itself into their work.”

Two of the Gold Lotus were awarded to Finch, Sydney ‘Deng Adut’ for Western Sydney University, and the other three of Gold awards were picked up by: