Who Knew That Cucumbers & Tofu Were Such Raunchy Little Devils? 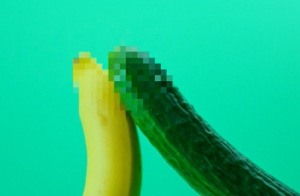 Cucumber and Banana are two original drama series exploring the passions and pitfalls of 21st century gay life, while Tofu is an online documentary series that explores all facets of contemporary sex culture.

Russell has explained "I once read about a scientific institute which had studied the male erection. It divided the hard-on into four categories, from soft to hard. One, tofu. Two, peeled banana. Three, banana. And four, cucumber. Right there and then, I knew I had my drama. And it's a joy to be back with Channel 4 and RED, to tell these stories."

4Creative’s Business Director Nik Windsor explains “The show names do a huge job for us in creating interest and speculation and about what ‘Cucumber, Banana & Tofu’ could be and creatively, it’s a gift from Russell as they are so phallic.

We wanted to create just the right mixture of fruitiness and sexual innuendo – but if you see it, it’s just your own dirty mind.

The overall look and feel of the campaign shouts “something big is coming to Channel 4” and we wanted to ensure that it had a distinctive visual identity, so we chose bright, bold, poppy colours to make sure it grabs people’s attention and stands-out on a dark winter’s day.”

The next stage of the TV campaign sees the launch of the season trail which includes clips from the show and will be seen on Channel 4 first from Tuesday 16th December.