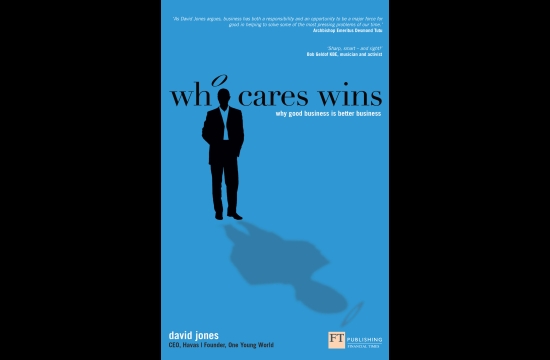 Business leaders are being urged to re-evaluate their role in society or face unprecedented criticism and damage according to David Jones, Chief Executive of Havas.
In his book, Who Cares Wins, David Jones shows that the most successful leaders and businesses in the future will be those who are the most socially responsible. Jones maintains that while this is a threat to some businesses, it is also a golden opportunity.    It comes at a time when the world sits on the brink of another recession with the Eurozone in crisis, the spectre of growing unemployment looming and the Occupy movement symbolising people’s rejection of politics and corporate greed. Meanwhile, the Internet has connected people and created a new social dynamic that no one could have predicted.

Who Cares wins is the first book to prove that far from being two separate subjects, social media and social responsibility are in fact totally interlinked. The revolution in communications is forcing businesses, politicians and leaders to be more socially responsible. Jones says it will reward those who are and remove those who aren't.    While delivering a stark warning, Jones insists that doing the right thing does not mean sacrificing profits and, in fact, will protect companies in the long run, and that the future of business is much more positive than some might have us believe.

Jones says: “The revolution in digital communications marks a bigger change for business and society than the arrival of television. You only need to look the sweeping political changes that have happened this year as a result of the Arab Spring to see that the balance of power has shifted.    “Translated to a business context, people want to feel good about the companies they buy from and with the unprecedented transparency social media brings, corporations confront greater consumer power than ever before.

“Businesses have to stop merely playing with the idea of being socially responsible, or risk falling short of their customer’s expectations. The leading businesses of the future will be powered by authenticity, transparency and speed. Any company that can’t engage deftly and creatively with these drivers will be left behind. But those that can and do, will reap the benefits.”
In Who Cares Wins, David Jones  probes the fundamental shifts that are unfolding in the world.
Explains that at time when businesses are beginning to understand where they should be heading but don’t know how to get there, what different factors are at play and how to handle them all.
Delivers advice and guidance in a series of key areas, including how to identify the best ways to transform a company.
Reveals how to harness the power of social media and utilise digitally-enabled employees.
Uncovers the secrets of how to operate in the new interconnected world, where local issues can blow up into global dramas within minutes.
Tracks how the age of image is dead and today is all about reality.   And covers the following areas:
Big is good: the more successful a business is, the more impact it can have .
From image to reality: Transparency and authenticity are the rules of modern business.   Leaders can’t opt out: Progressive leaders make clear that it is possible to do good and do well; they put corporate social responsibility at the heart of business strategy rather than leaving it in a silo
Creating good: the business world is witnessing the rise of the social entrepreneur
We-volution: the shift from control to collaboration. The most successful businesses will be those that collaborate and share the most, not those who control the most
The Age of Damage: business that is not socially responsible will suffer as a result of this failure
And introduces the Social Business IdeaTM that defines the strategic purpose of a business at the intersection of doing good and making money

The book follows how some of the world’s leading chief executives are reshaping their businesses around these insights. And how some others are failing to do so.

COMMENTS ABOUT WHO CARES WINS

Prime Minister Rt Hon David Cameron: “Great businesses are not just a force for good in our economy – they are a force for good in our society too. They have the power, the creativity and the enterprise to help us tackle some of the most pressing social challenges we face. As David Jones explains in this important book, in the future the success stories will be those businesses who truly recognise their role in the Big Society – who acknowledge the social as well as the economic value they have the power to create, and who realise the difference we all can make by the decisions that we take.”

Paul Polman, CEO, Unilever PLC: “Rarely has a title so brilliantly encapsulated the essence of a book. What you would expect perhaps of a clever ad man. Yet in Who Cares Wins David Jones shows that he is so much more: a visionary business leader who has glimpsed the future – and it doesn’t belong to those advocating the tired old ways of doing business. The forces of change are all around us: digitally empowered citizens and socially conscious consumers; a planet in distress and governments unable – or unwilling – to rise collectively to the challenge. Business can, indeed must, be part of the solution. But it’s going to take bold strokes, not limp gestures. That’s why Unilever has committed to double its size while halving its environmental footprint. As Jones argues, initiatives like this are not just the right thing to do, but the only way to build successful and competitive businesses for the long term.”

Arianna Huffington, President and Editor-in-Chief, The Huffington Post Media Group: “David Jones captures one of the most compelling and consequential trends of our time: companies realising that by doing good, they can end up boosting their bottom lines, as well. Who Cares Wins convincingly makes the case that corporate America’s embrace of good causes is no mere feel-good marketing ploy – it’s the way of the future.”

Sheryl Sandberg, Chief Operating Officer, Facebook: “In Who Cares Wins, David Jones makes the case that the biggest winners in business will be those that operate transparently and authentically. In a world that is more closely connected through social technologies, openness and speed must become core business principles. Jones’ work will motivate and inspire you to play an integral role in that change.”
view more - Creative