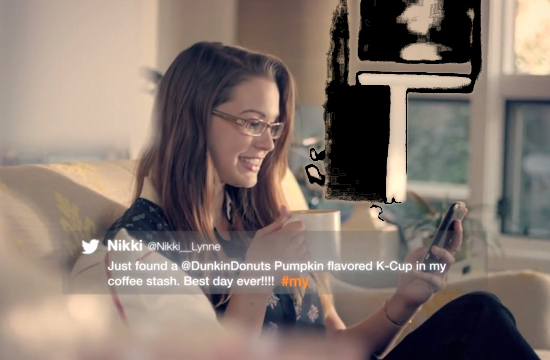 When coffee lovers tap out their next Twitter or Facebook post exalting Dunkin’ Donuts famous brew, they may find themselves starring in the company’s new social media-based ad campaign. A carefully selected group of Facebook and Twitter users who’ve tagged their posts with a #mydunkin hashtag are in fact already appearing in a 7-spot Web and TV campaign cut by Whitehouse Post Editor Adam Robinson in partnership with agency Hill Holiday and ACNE Director Tyler Manson.

Meg Iced Energy typifies the campaign. A college student bounces across campus and into a practice session with her a cappella group, Dunkin’ Donuts coffee in hand, as a voiceover of her reading her actual tweet sounds across the action: “Every a cappella rehearsal needs a dd iced coffee to get me though. #mydunkin.”