Which Big Brands Are the Top Ten Tweeters? 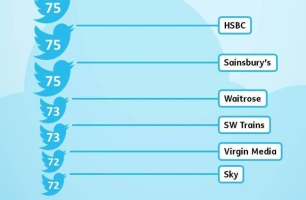 Findings from BDRC Continental’s mystery shopping service, Twystery - that measures how effective brands are at handling customer queries through the social network - are published for the first time today.

With an estimated 15 million users in the UK, Twitter’s immediacy and ease of use make it a popular platform for consumers seeking customer service and product information, or to make complaints. But just how immediate and helpful are the responses people receive on Twitter? BDRC Continental’s Twystery assesses a brand’s social media response rate, speed, and quality to provide an insight into the social media performance of some of the UK’s biggest brands.

Overall the top performers (scored out of 100) are Lloyds, NatWest, Morrisons, Barclays, Sainbury’s and HSBC in that order. Top sectors are financial services at 78 and supermarkets at 72. But if we break down the three components that form the overall score, there are significant differences by response rate, speed of response and the quality.

Response Rate - Only five companies, all of whom are either supermarkets or retail banks responded to every tweet. Waitrose, NatWest, Barclays, Asda and Morrisons are at the top of the table. BT and EE bring up the rear with response rates of 63% and 73% respectively. With a merger in the offing, perhaps social media will become more of a priority to keep customers happy. 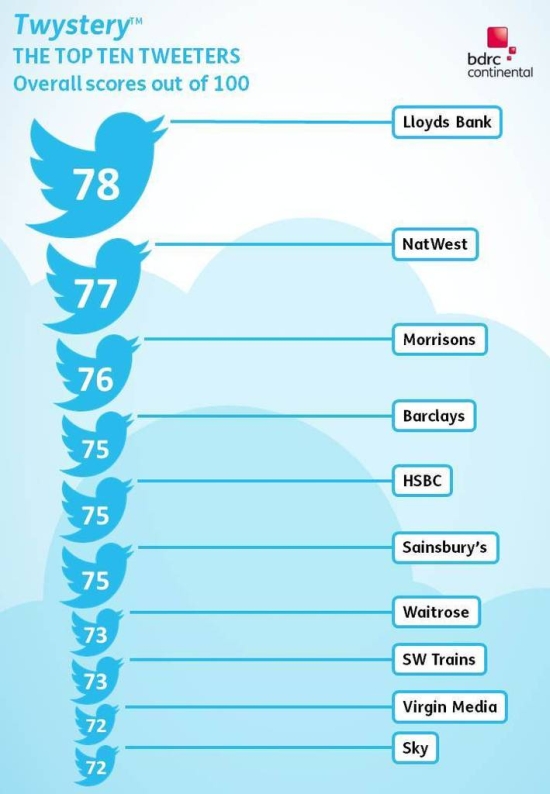 Response Time- Lloyds Bank and SW Trains had the fastest response time with an average of 1:05, followed by Waitrose and Hilton at 1:21, HSBC 1:33 and NatWest 1:42. EE again brings up the rear – this time with an eye watering average response time of 19:47 – a full eight hours after the next nearest player, O2 at 11:42 and some way behind the average, which was just shy of six hours.

Quality of Response (out of 100) – here two media players perform the best with Sky at 89 and Virgin Media at 82. Barclays and Sainsbury’s both at 76 and Tesco at 73 follow.

Tim Barber, Director at BDRC Continental who led the research says: “With so many people able to connect to social media 24/7 through their smartphone, tweeting a question or complaint is becoming second nature. As people increasingly use Twitter to contact brands hoping for a quick response, it’s important that brands benchmark their performance to see what service consumers are experiencing elsewhere. Twitter offers a great platform to improve customer engagement levels and deliver excellent brand service, but as we’ve seen, some of Britain’s biggest brands are falling behind. In our research, financial services providers and supermarkets can be rightly proud of their performance on Twitter – let’s hope the others can catch up.”