Where to Eat, Sleep and Hang in Toronto 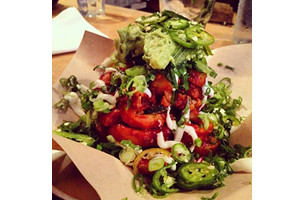 Toronto is hugely multicultural – and all those flavours, cuisines and quirks are apparent in a big way. We caught up with some of the city’s most eclectic ad folk to find out where you should be eating, drinking and hanging when in Toronto.

Sleep at The Darling Mansion, a new B&B in the epicentre of cool in Toronto’s west end.

Drink at Bristol Bombay for a proper UK pub experience.

Dance at Coda Toronto. If you’re up for a dance party you won’t do much better than this place.

Eat at Bar Raval for a Barcelona inspired tapas dinner.

Visit Casa Loma for a taste of Toronto history.

Eat at Bar Ravel. Grant Van Gameren, the Founder of Bar Isabel (which is also amazing) opened up his second spot. Spanish Tapas at its best

Eat at Mamakas Tavern for super-delicious Greek food with a stylish interior.

Eat and drink at Bar Isabel for craft beers and tapas.

Eat, drink, stay and hang out at Drake Hotel for live music, art exhibitions and more.

Spend a day chilling out in Trinity Bellwoods park.

Eat and drink at Bar Raval and Bar Isabel.

Eat at Grand Electric for amazing tacos. (Sister restaurant and just around the corner to Electric Mud.)

Go to a Blue Jays (baseball) or Raptors (basketball) game!

Eat vegan food in a pub at Porter House.

Watch sports at The Dog & Bear, The Contender or The Dock Ellis.

For the best workout, head to Academy of Lions.

Watch the best baseball team in the world.

Eat and drink at Bar Isabel.

Drink at Bill Hicks for rock-bar-meets-tiki.

However, saying that, Toronto is a city to live in, and is best experienced by getting to know its’ neighbourhoods. Personally, when showing visitors to our city around, I love to give them a tour of the different areas and letting them get to know the city on a local level.

Eat at Rasta Pasta in Kensington Market for some of the best Jerk Chicken in the city for $5.00!

Visit the city’s historic distillery district. It's also a great place to visit with cool restaurants like El Catrin and Cluny, which offer Mexican and French food respectively.

However, failing all of that, just follow this sturdy piece of advice from Lowe Roche Chief Strategy Officer, Jeff Dack.

Toronto has so many interesting pockets of activity happening at all times I wouldn’t even know where to start. I like to balance out a trip to a trendy hood with a visit to a sleepy one.

Toronto is an awesome city, I’ve lived here my whole life and am still pleasantly surprised by new areas I’ve never been too. Take the subway, pick a stop, start walking and explore. If you get lost, don’t worry – we’re friendly.