Where Are All These Insurance Agents Disappearing To? 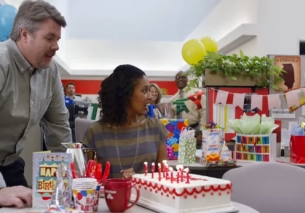 State Farm is charging into the New Year with a new broadcast spot, offering a fresh perspective on the brand’s ongoing “Magic Jingle” advertising campaign. Previous entries in the campaign have centered on State Farm customers who, in moments of crisis, are able to summon their agents out of thin air by singing the famous jingle: “Like a good neighbor, State Farm is there.” The latest work from the campaign presents a unique spin on that concept, taking viewers to the cubicles and kitchenettes of State Farm offices across North America to reinforce the idea that State Farm agents are there, whenever and wherever you need them.

“Magic Jingle Disappearing Agents” was helmed by award-winning Director Roman Coppola, who has also directed spots for Coca-Cola, Microsoft, and Volkswagen. The spot was created by New York-based advertising agency Translation, which developed the original “Magic Jingle” campaign in 2010.