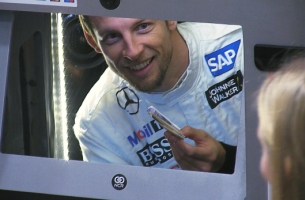 Last Friday saw the launch of a special Christmas film featuring Jenson Button at the heart of a hidden camera stunt, reprising his role as Santander’s Secret Santa. The film, created by WCRS, sees Jenson surprising and delighting real Santander customers on an anything but normal Wednesday at the bank’s Windsor branch.

In the film, we see unsuspecting customers using a newly installed (but entirely fake) contactless, touch screen ATM. They assume their cash is being counted as normal when they are prompted to ‘push The Jenson Button to continue’. Unbeknown to Santander customers, Jenson has been hiding inside the ATM all along.

When the customer pushes The Jenson Button, the ATM screen falls back to reveal Jenson sat comfortably inside the ATM. He proceeds to hand the lucky customer £100 in cash and a Christmas hamper, all courtesy of Santander’s Secret Santa.

The entertaining and charming film, with its light comedic narrative, contributes towards Santander’s wider ‘Secret Santander’ Christmas activity, promoting the bank’s commitment to rewarding its customers and communities during the festive period.

Billy Faithfull, Executive Creative Director, WCRS said: "The two best things about Jenson Button himself, aside from being a unique talent and a national icon, is that he's genuinely a decent bloke who likes to have a laugh, so he jumped, or rather crouched at the chance to get involved with a light hearted bit of fun with Santander's customers. The second is his name, what an absolute gift! It wasn't easy though, a military-style operation, a master mind sting that pulled off some well-deserved Thank You's to unsuspecting customers adding a comedic edge to Santander's Secret Santa campaign."