Whatever, Linda: The Toronto Talent That's Shaking Up Online Drama 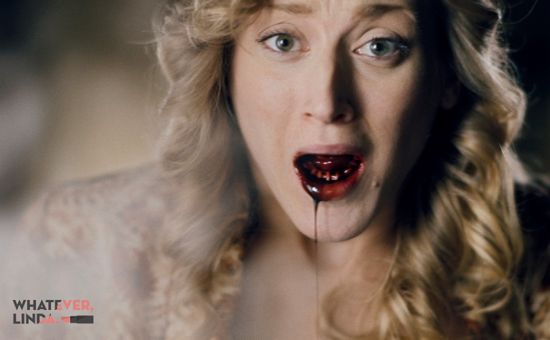 ‘Web series’ can be a tricky business. Budgets don’t always allow for captivating production values, crew, cast or promotion. Just the label itself has a buzzword-heavy whiff that you probably want to avoid. ‘Web series’.

A crack team of Toronto and LA-based creatives are changing all that with their hit online comedy Whatever, Linda. Co-creators, writers, and producers Julian De Zotti and Hannah Cheesman have been joined with Toronto and Los Angeles-based interactive agency Secret Location, co-executive producer Mackenzie Donaldson, producer Kevin Saffer and Touchpoint Films, and director Matt Eastman. The show is an award-winning, dark and funny dramedy set in 1978 New York. Linda is down and out before landing a secretary level gig at one of Wall Street’s best financial firms, where she plots a diabolically lucrative, Madoff-esque Ponzi scheme.

Whatever, Linda doesn’t stop there, though. The ‘internet odyssey’ (their words) was created with an online-orientated distribution and design strategy in mind, with a fully responsive website hub at its heart. On top of hosting the series’ episodes the site features content including studio guides for each of the main characters with content pulled from in-character Instagram and Twitter accounts, infographics displaying the hierarchy of the show’s invented corporate world, and feminism through the ages as seen through Linda’s perspective.

LBB> How did Whatever, Linda initially come about?

ME> These two young badass writers – Hannah Cheesman and Julian DeZotti – had a loose idea for a Ponzi scheme dramedy and they asked us to shoot a proof-of-concept teaser. Over here at Touchpoint, we like comedy, drama and money. We like to tease, so we were in.

In the beginning, there was a lot of talk about Bernie Madoff. What if Madoff wasn’t the real genius, but rather his cunning secretary? What would that story look like? That was the initial seed.

LBB> Can you tell us a bit about the narrative?

ME> Short answer: Whatever, Linda is a web dramedy about Linda Thoroughbred – one cunning, attractive secretary who made off with more money than Madoff.

Longer answer: It’s 1978 and young Linda Thoroughbred is down and out in New York City. She’s so broke she’s drinking pickle juice. But then she scores a sweet entry-level gig at an elite Wall Street firm and quickly discovers a hole in the system that allows her to create a Ponzi pyramid from within the ranks.

She smokes some hash, makes out with a few people… there’s a lot of music, murder, and mayhem.

LBB> Who did you collaborate with on the project?

KS> We were lucky enough to work with James Milward and his killer interactive firm Secret Location. They’re one of the leading interactive firms in North America, and James is pretty much the smartest guy in the room, well in any room.

We didn’t want to simply post the series to YouTube and watch it die a slow, painful, and unnoticed death. With James and Secret Location on board, we knew our interactive platform, design, and distribution plans were all going to be on point. James and his team don’t do anything half-assed.

LBB> It seems like it’s a bit of a mesh of advertising, TV and digital talent. How do you think that affected the end result?

KS> Everyone brings something to the table. For instance, through Mackenzie Donaldson, who is a producer on the show Orphan Black, we were able to score Sharon Forrest as our casting director. That gave us access to a lot of A-level TV talent. I tapped into my network of long and short format crews to get this shot on time and on budget. Our first assistant director and our sound recordist are some of the most experienced TV series/long format guys in the city. On the other hand, we had some commercial/short format crew that took it up a notch or two from their usual position on set, and they all worked together brilliantly, even if the average temperature in the studio was below zero. But that’s a whole other story…

ME> You know, it’s interesting, coming from advertising I’ve had a tricky relation-ship with female characters. Sadly, I’ve done the ‘beer babe’ thing in the past, cute girls running around in bikinis. Awful, awful. So with ‘Linda’ I really wanted to lose my ‘male gaze’. In my mind, the series really is a feminist parable. Screwing over all the bad dudes for all the bad stuff they’ve done. That really is one of Linda’s prime motivations for crafting her Ponzi scheme – forget the money, forget all that; rather think about how to get a message to these jerks? It’s a revenge story about taking out the pricks, so to speak.

LBB> You’ve said, “the series has been strategically designed to form a deeply engaged fan-base and provide long-term scalability”. Can you tell us a bit about that process? What kind of research, thought-processes and discussions were happening during that stage?

JM> When we began working on outlines, scripts and the overall concept, we designed the storyline to be serialized, to provide a longer arc that could be developed over multiple seasons, or scaled to other formats, like a traditional TV show. We created characters that could be leveraged over the long term, and we also really tried to create an overall story that people could relate to. The strategy came in then, we cast social influencers in the project, like Graydon Shephard, who played Linda’s cross-dressing neighbour and has a huge following with Shit Girls Say. The last piece of this was designing each episode to have a cliffhanger, bringing the audience into each episode through both the narrative as well as custom ‘next on’ scenes from later episodes, and having it done quickly but effectively to entice the viewer to keep watching and click the next video immediately.

LBB> The whole series is built around an online hub that really adds to standard episodes. It’s almost like an integrated campaign centred around Whatever, Linda (but more entertaining haha!). Was the online hub always part of the plan? What was the strategic thinking behind it and what does it entail?

JM> Yes, the online hub was a key part of the distribution strategy. The key to it is that it’s still using YouTube as the video delivery platform so our audience can find the episodes natively within YouTube or from our site. However, the site’s true purpose is to provide backstory and context around the series, setting, timeline and characters, as well as to create custom social sharing mechanisms that customize the episodes’ content for Facebook, Twitter and Instagram.

We built a custom layer on top of the YouTube player, which sits on the site. It enables pausing at any point in the video to generate assets, image and video, so that moments of the series that fans like can be pushed at that instant, versus trying to just push a stock poster image or pat trailer.

LBB> An online series of this quality is a real benchmark. Were you nervous at all about its feasibility and potential popularity?

ME> I hate the term ‘web series’. There’s such a stigma attached to it, you know? Have you seen that Stephen Merchant HBO show, Hello Ladies? One of the characters is this sort of hapless out-of-work actress who’s always going on about her ‘web series’. It’s basically a joke that runs throughout that show – that web series are a joke – and I think even the greater public at large, not just film industry folk, think of ‘web series’ as jokey, self-generated projects by unemployed actors. So we prefer to call Whatever, Linda an ‘Internet Odyssey’. It’s so much grander, right? There’s no stigma to that term, right? Maybe there will be in the future though, and people will realize we’re just putting lipstick on a pig – “Oh no, not another Internet Odyssey!”

LBB> Do you think brands could pick up on the idea to tie themselves into something similar in the future?

ME> Remember A Christmas Story? Ralphie’s always listening to those oldschool radio shows presented by Ovaltine. I swear, watching that movie as a kid made me wanna drink Ovaltine so bad. I’d ask my parents, “Can we buy some Ovaltine?” My parents told me they were pretty sure that brand didn’t even exist anymore! The point is I miss the simple sponsorship model, and I think smart brands are coming back around to that with digital content. Absolut did it with Spike Jonze and ‘I’m Here’. There’s nary a bottle in sight in that film, just ‘Absolut Presents’ off the top, that’s all. Red Bull’s doing it right with its Music Academy Series. I hope brands start latching on to more scripted digital content. Why not? Sometimes the unique selling proposition isn’t enough. I’d love to see a brand with a strong female focus latch on to Whatever, Linda. MAC Cosmetics presents Whatever, Linda. I like the sound of that!

LBB> It has already picked up a number of awards. Why do you think it’s proved to be so popular?

ME> I think people are genuinely surprised by a web series that looks and feels like an HBO show.

It’s crafted. There are over forty music cues, great gems from the 70s. The sound design is deep. The titles are out of this world. The wardrobe is spot on, hairstyles and makeup are all proper to the period, and the lighting’s badass.

But at its heart, people connect with the writing and the theme – what it’s like to be poor and want more, feeling marginalized, wanting to screw over your boss and be successful in doing so. Revenge: sweet themes never grow old.

LBB> How did working on this project, without a brand and agency, differ to your usual productions? Is it something you wish to explore more?

KS> Just another day at the office.

That was the same case here. I’m a production junkie – I love the challenge. I ‘grew up’ in the long format production world before focusing on advertising/commercial work for the last eight years or so, but we’re still all filmmakers and we’re slowly but surely clawing our way back into long format, one ‘Internet Odyssey’ at a time.

Check out the full series at: http://www.whateverlinda.com