What Will Get Tongues Wagging at this Year’s Cannes?

Awards and Events 504 Add to collection 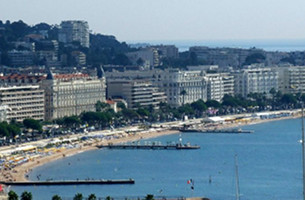 Every year Cannes gets bigger and bigger – and one thing that means is that there’s always more to talk about. To help you with your small talk on the Croisette, we’ve picked the brains of some of the LBB & Friends Beach co-hosts to find out what they think will be the hot topics and pieces of work that will crop up.

On the more digital side of things, I think a big theme will be The Death of Technology-First Ideas. That sounds really dramatic (especially as I've capitalised the first letters of each word) but I just mean that there'll be less awarded work where the tech is really overt and dominant. We've all had our fill of case studies where something like augmented reality or facial recognition is 80 per cent of the idea, rather than the mechanism behind something truly magical. Instead, the tech will be more expertly, subtly and relevantly deployed and the story or experience will be the star. Of course, there will be exceptions - but they'll be so bloody good that we won't care.

We at ChilliBean have taken a real interest in the Glass Lion award and what it’s doing for gender equality and gender roles in advertising. We’re really looking forward to seeing the shortlist and the winning entries.

The talking point will be that – as per 2014 – this year Cannes Lions has become the ‘Clients Lions’ at the expense of Creative. The Creative will be consequently below par. The upside of all this is that next year Clients Lions will have become the norm so the talking point then will be how wonderful the work is!

In terms of the judging and the work, there are several pieces that we think people will be talking about, including the campaign done by Stella Artois for Wimbledon.

The Nescafe Films from India.

Marilyn Manson! Will we see him sunbathing on the LBB beach?!

The South African party is sure to fire up and get tongues wagging. Always is…

New forms of media, especially VR. It has been getting the spotlight in a lot of shows leading up to Cannes so it will definitely be an interesting year.

It’s been on the cards for a while, but I think data will come into its own and get the recognition it deserves at this year’s Cannes Lions Festival. This will mainly be through the launch of the Creative Data Lion, which I am incredibly excited about. It’s great to see the importance of data in creativity is being acknowledged, because these days the two are intrinsically linked.

We are often drawn to the final product of a campaign – a beautifully designed video, poster – whatever it may be – and can easily forget that data lies at the heart of it. It allows us to identify trends and insights, which feed into creative and innovative ideas that truly engage consumers. Another hot trend will be data and technology driven innovation, especially the rise of wearable tech (I am certain that the Apple Watch will make its way as an example into many a presentation this year) and VR given the hype around the Oculus Rift.

Obviously, #KayneWest will also be trending on Twitter, should he decide to swing by this year as well!

Always’ campaign ‘Like a Girl’ was all about how you perceive yourself, and how you are perceived; it’s an important and real issue that was brilliantly executed. I’m all for championing girls’ confidence and empowering women!  I would also include Under Armour’s ‘I Will What I Want’ as a potential winner that will get people talking this year.

Considering that most of our well known and loved UK companies that have them aren’t hosting Villa parties this year I’d say all bets are off! Rushes and Shots will no doubt be full to capacity and actually it opens up opportunities to go to events you might not normally consider… for example I have emailed the Dutch Young Creatives to see if the Jungle massive can join their Slumber party on the beach… don’t forget your onesie’s people.

I think the big talking point will definitely be mobile/social media. Last December we passed a tipping point that marked a milestone in our digital age, when mobile took over TV as the most popular form of media. The modern day celebrity is no longer the film star, TV personality or model – it’s the person with the biggest social media influence, with the biggest reach. Bloggers/vloggers are the modern day celebrity, and are being used in more ‘traditional’ types of media, with brands leveraging their influence in TV ads or print campaigns. Things have gone full circle and creates a completely omnichannel experience for the consumer. Kim K is living proof of that!

Cindy Gallop, founder of makelovenotporn.com and self-described "rampant feminist" on the Jury.

We think this year’s ripe for a breakthrough event on the fringe of the festival. There are regular parties that aren’t happening this year, so someone is going to nip in and occupy that space. We’re looking forward to finding out what they are and who will be hosting them.

VR, interactive storytelling, media convergence, sadvertising and Prankvertising. There you have it.

The hype surrounding data and the role artists will play in it will be a big talking point, as will the Glass Lion and the acknowledgement that we need to champion work that addresses gender inequality.

I think there will be lots of people complaining about the big companies taking over the beaches. The Shots party and the Location Guide Soiree are both exiled from their normal places on the Majestic Beach and Pier – it is the end of an era. Thank goodness for the LBB Beach.