What Will Adland Do with Facebook’s New Blank Canvas?

Trends and Insight 595 Add to collection 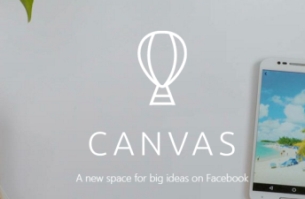 Facebook is very excited about its latest ad product, Canvas. They’ve gathered industry journalists in Facebook offices around the world, from Los Angeles to Argentina, to sit in on a livestreamed launch and the language surrounding it shows that they think it’s a completely new kind of creative advertising format. Chief Creative Officer Mark D’Arcy likens it to the invention of the double page spread ad.

In London, Rob Newlan, Head of Facebook’s Creative Shop for EMEA, has given up his Thursday evening to spend it with a small group of hacks who, let’s face it, are mainly here for the opportunity to have a nosey round the Euston HQ. As we link up with Facebook’s New York office, Mark D’Arcy is preparing for lift off. Expectation crackles in the air.

So what is it?

Canvas is a new mobile-only advertising tool that allows brands to create immersive, flexible experiences. It’s been created in response to requests from the creative community. One of the key design principles is that Canvas ads will load fast – really fast.

Users can swipe, slide and tilt their way around the Canvas – indeed the other two central design principles are that the experience is ‘fun’ and ‘rewarding’. Beta stage testing shows that the average time spent with a Canvas is 31 seconds, with the ‘top’ Canvases racking up over 70 seconds. It remains to be seen whether these times are due to curiosity and the novelty of the format, but they are nonetheless impressive stats when compared with the average online banner ad.

“People love them,” says product lead Paresh Rajwat. “They interact with them the same way they’re interacting with organic content.”

In fact, Rob Newland points out that Canvas has ‘a very close cousin’ in Facebook’s Instant Articles platform, which was launched in May last year and allows publishers to deliver news and features in more interactive ways.

Prior to launch Facebook worked with brands from a range of sectors to experiment with the product, keen to show how Canvas can meet a variety of objectives, from immersive fashion catalogues to cheeky activations.

Working with Burberry, for example, has been an exercise in style, finesse and craft. “You go in and they care about every single element that’s going to come out for their brand, so if it’s going to be a VR ad, it better be the best VR ad that’s ever come out. If we’re going to present this, we’re going to present this really beautifully. So working with in-house craft has been really interesting for us, as has working with Burberry on what is their representation of creativity,” says Rob.

High fashion is one thing – it’s a sector defined by aesthetics and creativity – but how would Canvas play with, say, a fast food brand? At the launch in New York, Brandon Rhoten, the VP of advertising at Wendy’s explained how a ‘deconstructed Wendy’s Burger’ experience targeted just before lunch time had people playing with the experience for an average of 65 seconds, with 2.9 per cent of people clicking through to find their nearest restaurant.

“I’ve got seven national agencies, 21 local agencies, I’ve got 100s of millions of dollars to spend on advertising a year. And I get bored. I get bored because I see the same executions over and over and over. It’s not that my partners aren’t awesome – they are – but because the 30-second video, the minute-long video, the four minute video is all the same. We need to tell our stories in a lot of different ways on a lot of different platforms and we’re always looking for opportunities like Canvas that actually tell an immersive, interesting story… about a cheeseburger.”

How does it work?

Brands can build full-screen experiences by cobbling together images, cinemagraphs, videos and gifs – the free online creation tool is designed with a simple interface for non-coders and requires no special software.

The development team have deliberately kept the tool modular and flexible – one of the most influential pieces of feedback they’d had from the members of their creative board was that there was a hunger from agencies and brands for a more flexible advertising platform.

The tool is currently live and available to use, but Facebook will be watching closely to see how it is being used in order to iterate further. “We’ve put our first six or seven modules in it,” says Rob Newlan. “We want to see where people are going to push and work creatively with those creative constraints, and then also what we need to build beyond.”

The platform for stitching together experiences is straightforward and has been designed so that small indie businesses can use it as easily as giant agencies and multinational brands. But figuring out the execution and structure of content for what is, essentially, a brand new platform also requires education and support.

“We have production teams around the world now, we have exec producers around the world and we are working in tandem with the production industry to say, ‘what does this look like?’. Yes, this is about us doing classic storytelling, and yes, this is about non-traditional storytelling – so what does that look like when it lands on your feed? Maybe you don’t need to tell all of a story, maybe you start in the middle – and so how is that brought to life? We’re working with these people, and we’re fortunate to have a community like Instagram where you have 400 million people creating and crafting there,” he says.

“It is about the range, with the likes of the Framestores and the RSAs through to the new, interesting end of people who are crafting specifically for mobile, and I think it’s important to look at both.”

So now Facebook has released its baby into the wild, the next thing will be to see what brands and creatives do with this new ‘blank Canvas’ they have to play with. The payment model for Canvas and delivery algorithms are the same as Facebook’s more traditional ad platforms, which means that better-crafted and more interesting experiences should spread further. Chatting with Rob after the livecast round table, he talks about how excited he is to see what small businesses and budding new brands do with the tools. “I think it’s going to be a great leveller,” he says.

That feeling of anticipation, of open-ended exploration is fuelling much of the internal buzz around Canvas. The message from Facebook is that they’ve created the tools, but the content and creativity from the outside world will define what Canvas becomes and whether it truly does change mobile advertising.

As Mark D’Arcy explains, “Probably one of the things we’re most excited about is when the creative community around the world discovers canvas and starts imagining things we never would have dreamed of.”