What the Ad Industry Should Learn from Iñárritu 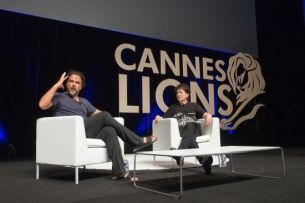 “Hopefully when people get inspired by Inarritu, we will have more people pushing this industry forward. I tell you, it’s a very conservative industry. But do I blame the clients? I blame ourselves. We are guilty too. We say ‘oh you want that? I’ll give it to you’ and we take the money and we run. It’s immoral in a sense and for me that kills creativity,” says Ogilvy & Mather's Worldwide Chief Creative Officer Tham Khai Meng days before bringing the director Alejandro González Iñárritu on stage at Cannes Lions.

Every year, Khai brings an inspirational figure to Cannes Lions – and this year’s guest was on stage not only to bring insights from the world of film but to energise adlanders stuck in a rut of creative mediocrity. Iñárritu may be best known for his Oscar-winning movies (21 Grams, Birdman and, oh, a little movie called The Revenant), but he’s also a multi-award winning commercials director and a life lesson in what can be achieved with vision, grit and ambition.

In conversation with Khai, he talked about his journey from radio producer to award-winning hauteur, revealing that directing had not always been his ambition. In his early twenties he played in bands before moving into Mexican radio where he honed his storytelling abilities and immersed himself in the music world. As anyone who was driven through Birdman by its hectic jazz drums will know, music is integral to his films - and Iñárritu revealed that his relationship with long term musical collaborator Ryuichi Sakamoto dates back to those radio days.

These days, Iñárritu is best known for his world class feature films, but he also spoke about his work in commercials and how his experiences working on highly detailed, finely honed TV spots had also been an invaluable education. He is also no stranger to Cannes Lions; in 2010 he won a Cannes Grand Prix for Nike’s ‘Write the Future’, picked up a couple of golds for P&G’s ‘The Best Job’ in 2010 and even as far back as 2002 won a Gold Lion for the BMW short film Powder Keg.

Looking to the future, he pondered the possibilities of virtual reality and augmented realities, concluding that their use very much depends on what they bring to a particular story. Where Birdman was an exploration of suicide and associated imagery and therefore might not be appropriate, he suggested that a more immersive and sensory tale like The Revenant could be appropriate. “I tried to create a sensory experience,” he said of the Leonardo DiCaprio Western. “Little dialogue, very simple plot. In this case the virtual reality would add even more charge to the film. In any case I'm really fascinated by these technologies.”

In an age where A-List celebrities are a common sight during Cannes Lions, Iñárritu was invited with a very clear purpose in mind. He’s a director with a famously uncompromising approach to creativity and a determination to tackle even the hardest challenges in pursuit of a superior outcome. In The Revenant, he infamously chose to shoot in only natural light, giving him just a one-hour shooting window every day. Nike’s Write the Future was yet another exercise in commitment and ambitious craft.

And that, says Khai, is something he wants the audience to take with them now that they have left the South of France.

“He has the courage. Where we are fiddling with the minutiae and getting upset about things – this guy says ‘alright, I will shoot this because I want to shoot it’. He blew the budget, but it was art and he was pushing it further. The way he portrays reality is novel. The way he shot on digital was novel. Up in the mountains the light disappears quickly and he only had one hour per day of shooting time. Chasing light, chasing snow, it was so intense. He had to rehearse countless times because there was just one hour to shoot.