What Kind of Life Will My Child Have? 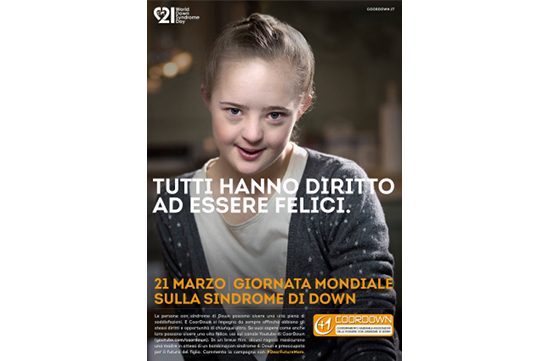 For the third year in a row, Saatchi & Saatchi has developed a campaign for CoorDown on the occasion of the World Down syndrome Day, which will be celebrated on March 21st.

The chosen theme for World Down syndrome Day this year, is the right to happiness and well-being of people with Down syndrome. The goal is to promote a culture of diversity and true integration into society, especially in the world of school and work.

This year's campaign was inspired by an email that a pregnant mother, expecting a child with Down syndrome, has recently sent to CoorDown.

The email is just one of many that the association receives periodically, but the appeal in this case is particularly touching: "What kind of life will my child have?"

In order to respond to this expectant Mother, and at the same time to many other Mum's, Saatchi & Saatchi filmed 15 people with Down syndrome, from all over Europe.

The people, through the CoorDown YouTube channel, will explain that her son's life will be happy, just like theirs: that he will be able to learn how to write; he'll be able to travel; he can earn a salary and take her out to dinner; and when he is older he will be able to live alone. Sometimes it will be very difficult, almost impossible, but isn't that the case for all Mothers?

This year, CoorDown Onlus - Coordinator of the National Association of people with Down Syndrom - is the leader of an international project which includes ten associations from nine different countries: Italy, France, Spain, Croatia, Germany, England, Russia, United States and New Zealand.

The official hashtag for the Dear Future Mom campaign is #DearFutureMom

The project Dear Future Mom reunites CoorDown and Saatchi & Saatchi again after two highly successful projects that have earned the agency 11 Lions at the last two Cannes International Festival of Creativity and a Grand Prix at ADCE: the first one in 2012 Integration Day and the second one in 2013 #DammiPiùVoce.