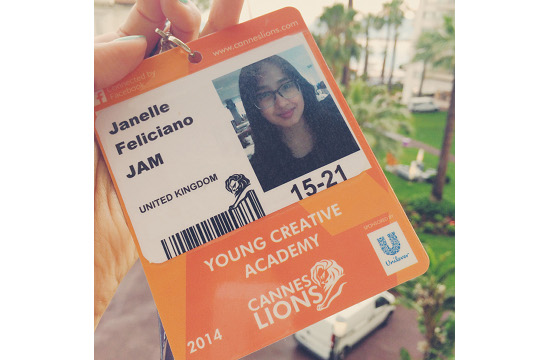 I am proud to say I’m no longer a Cannes virgin. I made sure this would be the year I would experience the folklore-like debauchery that occurs in the South of France. Looking for any way in, I entered both the Cannes Young Lions print competition and the Young Lions Creative Academy. Luckily I was shortlisted for the former and was chosen as a UK representative for the latter. The Young Creative Academy consisted of 20 eclectic young creatives from all points of the globe, from Costa Rica to Korea. We were hand picked by the legendary Bob Isherwood, bringing a variety of talents and backgrounds to the table. Some were stand up comedians, some were designers and others were going to emerge within the next six days as Lion winners.

Our first day was more of a meet and greet, giving us the chance to really understand what the next few days were going to entail. Each day would be peppered with seminars in the Grand Auditorium, intimate workshops and Q&As in our classroom. Afterwards Bob introduced our other tutor, Matias Palm Jensen, founder of Swedish hot shop, Farfar. He explained how “old advertising” is like bowling; we have our big heavy campaign and one chance to send it down to try and hit as many targets as possible. Whereas “new advertising” is like a pinball machine, with its numerous touchpoints. If the ball begins to drop, just flick the lever with something new and you’ve brought life back into the game.

Hangovers seem non-existent in Cannes, I guess we had the sun and free smoothies at Google Sandbox to thank for that. Though in reality it must have been the ADrenaline of knowing what day two had in store. Art, storytelling and design were the themes of the day. I told a dramatic 45 second story through the ancient art of dance and Beyonce. Inspired by Patrick Stewart, I channelled my inner Captain Picard and piloted a doomed spaceship and due to the inspiring Yves Behar, I reckon my agency lost an art director and gained a product designer. We ended the day with no-one being able to find Bob Greenberg, so they told stories about him instead (sorry but I’ve been sworn to secrecy and can’t reveal any of the hilarity).

By day three I realised that if I showed the slightest curiosity inside the cabanas by the beach I would be showered with free coffees, croissants, and tote bags. I think this need for free things is left over from the days of being an intern and in order to save my expenses for the gutter bar I repeated this trick every morning. The theme of Day Three is best described as ‘Other’. Every talk seemed to be about everything other than advertising. There was the creator of the Blair Witch Project speaking on the importance of fans and social. A forensic psychologist who studied the behaviour of hardened criminals and related them to consumerism. A terrorist negotiator for the UK and US governments who taught us to read between the lines to find out what people really want. And by the end of the day we finally found Bob Greenberg, who gave us insight into the R/GA accelerator venture model, teaming the ingenuity of startups with the expertise of marketers to create out-of-this-world products.

After the Young Lions Party and an extended trip to the gutter bar, we took a 3 hour nap, recharging ourselves for a seminar-filled Thursday. I’ll blame it on the lack of sleep and the extreme comfort of the velvet seating, but we didn’t feel the seminars brought the best out of us. There seemed far too many occasions where speakers were simply pitching their companies - minus Jared Leto and Courtney Love who were absolutely mesmerising - so we gave the final few sessions a swerve, preferring to ask Bob for more tales from advertising past.

Our own Young Lions afternoon speaker, Humberto Polar was one of my most favourite talks of the week, as we share the same priorities. He spoke about his passion for creating good with advertising and shared the work he’s done to promote it. From a billboard that creates drinkable water out of thin air to pairing young Brazilian students learning English with elderly people in care-homes. I realised that it’s time we speak about transparency, trust and ethics with all our clients. In this highly connected world people know when your brand is artificial and so the trust you create with them will be artificial as well.

By the fifth day I finally grew accustom to the 4-hour naps between the gutter bar and waking up for an early morning class. I would walk down the Croisette to the Palais smiling at the thought of how I could do this everyday back in London (that obviously didn’t happen and I quickly reunited with my beloved snooze button). We started the morning with the New Directors’ Showcase. Ever since it began, it’s always been more than a reel. This year they blended wearable tech and film. A specially made band from Saatchi & Saatchi visually reacted to the wearer's heart rate, signifying if you thought it was awesome or shit. (I’ll let you know. It was all awesome.).

Unilever sponsors the Young Lion Academies, so we had the rest of the day to understand how they see themselves. This was perfect as Jam handles a majority of Unilever’s haircare brands. I felt as though I was given a secret sneak peek to the way they think. I absolutely admired how they understood that brands should move from just being cultural icons to social beacons. It was refreshing to hear that brands have a great opportunity to change and face the world’s challenges.

Our final day crept up so quickly but we wouldn’t leave this place without learning a few more things that would benefit us in the long term. We learned how to say no in an industry that always promises good things from saying yes, we learned from Bob Isherwood the meaning of a great leader and we were all scolded for having never read The Art of War (don’t worry Bob I’ve downloaded it on my Kindle). And from Sir John Hegarty I’ve made it my goal to never sit on a bean bag again, because apparently that doesn't make you creative. But what I did learn about being a creative leader is that the ones that end up rising to the top are all really nice. Nice would've never been a word I would think about when it came to leaders. But coming to Cannes and meeting the world’s top creatives I found out what they all had in common. They all wanted to help, to inspire and to befriend the young, creative and hungry.

Over the week we exchanged our bright eyes and bushy tails for an inspiring and overwhelming amount of knowledge. Friendships were solidified over multitudes of rosé selfies and my phone is full of pictures of a spray-painted gold, plastic lion. He’s our mascot, warmly named Trinity because we are the third Creative Young Academy. Trinity is in all our group photos, he has his own hashtag and has made friends all over the gutter bar. Right now he’s travelling the world to each member of the academy with the promise of us all meeting up next year to take Trinity on stage when we collect our real Gold Lions.

Cannes and the Young Lion Creative Young Academy has changed everything. I’m wiser, I’m hungrier, I’m prouder, but most of all I feel like I can do anything.

Janelle Feliciano is a creative at Jam