What If Carlsberg Did Supermarkets? It'd Probably Be as Awesome as This

72andSunny Amsterdam refreshes 'If Carlsberg did' campaign after four years 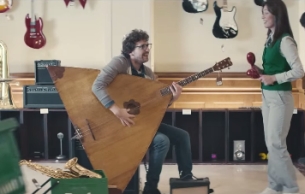 Carlsberg, the internationally renowned Danish brewing company, is launching a new campaign, created by 72andSunny Amsterdam, to put a modern twist on probably the most iconic beer advertising campaign of all time – ‘If Carlsberg did...’.

Bigger and fresher than ever, the famous advertising platform will take centre stage in a new global campaign for Carlsberg, designed by 72andSunny Amsterdam, which aims to revitalise the clever sense of humour that the beer brand is famous for across the world.

Showcasing Carlsberg’s commitment to delivering the finest quality in everything it does, the new advertisement visualises the dreamy scenario of a Carlsberg supermarket – “Probably the best supermarket in the world”. Abolishing the previously idolised image of the alpha male, the film offers an amusing and deliciously refreshing take on the fantasy of an everyday beer drinker. The central 40 second film, which will also run in 30, 60 and 80 second versions, will launch in the UK, both on TV and across online channels, as well as running in Ireland, Sweden, Denmark and a range of more markets around the world.

This campaign closely follows the recent launch of a series of online films that captured the distinctly superior taste of Carlsberg. The films, which were rolled out globally, reinvigorated the ‘If Carlsberg did...’ meme by injecting a number of scenarios with the fun and sophisticated humour the brand is so well known for.

Mikkel Pilemand, VP Carlsberg brand says: “It is great to be back on air with ”If Carlsberg did…”. It is a very strong campaign that has global appeal. 72andSunny has based this first new execution around strong consumer insights that resonate very well with today’s beer drinkers.”

Nic Owen, Managing Director, 72andSunny Amsterdam says: “'If Carlsberg did... was a meme before meme's existed and has remained as key internet parlance. We're super excited about making the most of it in a day and age it's perfectly suited for.”