What Happens When an Ad Finishes? New Campaign for Plusnet Provides the Answer 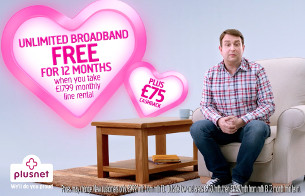 Plusnet, the award-winning Yorkshire based broadband provider, has launched an online video campaign as part of their direct response activity, aimed at targeting people in the market for renewing their broadband.

The campaign comprises of multiple creative variants aimed to leverage the various formats in which online ads are now served. Brand front man ‘Plusnet Joe’ pokes fun at the situations we often find ourselves in when faced with ‘yet another ad’ by cutting through to the unassuming viewer and making light of the situation.

The skippable formats aim to encourage viewers to stick around a bit longer rather than just hitting the skip button as soon as it’s presented, whilst the forced executions acknowledge the truth that they’ll be intruding on the viewers own time for the next 30 seconds and there’s not much the viewer or Joe can really do about it.

Some even go as far as apologising for the interruption, with one ad starting with Joe saying, “If you’re after a great deal on broadband, Plusnet can help you out”, …” If not then I’m very sorry, someone somewhere has messed up… You see, you’re only supposed to see this ad if you’re interested in Unlimited broadband. And if you’re not, well, something has gone badly wrong.” Before shouting off screen to those presumably responsible for the poorly targeted interruption, “Darren! You’ve got bad data!”

The online activity will be running from August, whilst Plusnet Joe continues to be present across all of Plusnet’s direct response marketing channels.