What Do Real Women Make Of This Year’s Glass Lions Winners? 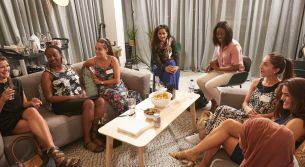 It goes without saying that we still have a long way to go when it comes to gender equality. That’s why, at Cannes over the last few years, one of the most desirable Lions has not been clunky and metallic. It has been made of glass.

The Glass Lion honours the very best work that strives to make a difference to gender stereotyping, inequality and prejudice – and progress towards a more representative world.

And from a cynical perspective, this makes a lot of sense. Globally,women make 80% of all purchasing decisions. So like it or not, they’re influencing how and where money is spent. That’s a stat that brands –irrespective of agenda – would be hard pressed to ignore.

In its purest form, vying for a Glass Lions is an opportunity for us inthe industry to use our pervasive reach to make a genuine difference to an issue that affects every single one of us, irrespective of our gender.

Of course, during Cannes week, it can be easy to get swept up in theback-patting and indulgence of being so self-referential. That’s why we wanted to ask real women – from outside the world of communications – what they thinkof this year’s Glass Lion winners.

We asked them to discuss the work on merit, as part of our 21st Century Woman initiative (an ongoing scheme that aims to better understand and represent women today). We wanted to see if they felt that the industry was getting to the heart of the issues that really matter. And we wanted to know if the best in creativity can make a meaningful difference to the lives of real people. It made for some fascinating insights…

Fearless Girl is a worthy winner

Overwhelmingly, Fearless Girl was the ad that our focus groups of real women singled out as the most likely to advance gender equality. And the reason? It’s simplicity and single-mindedness. “To me it means, you’re a gir land you can do anything,” said one participant. “She’s fearless and strong,”said another, “she will just stand there and face down the Bull.”

The right to speak is hard-earned, and brands should be wary

Gold Lion winning ‘Gender Violence’ from Tecate proved the most controversial of all the ads we showed to our focus groups. Confusion arose immediately on who has the right to talk about women’s rights issues, with one participant asserting that “this is a really sensitive issue and it feels like it’s just being used to sell beer.” The question of brand authenticity around issues and causes is as fraught as it ever has been, and at its height risks audience alienation.

Our groups similarly honed in on Audi’s ‘Daughter’, with one stating“it’s really emotional and I don’t know how I should feel about that” and “it doesn’t feel like an Audi advert at all.” Ordinary women, it seems, still believe that adverts are about selling products – and therefore brands still have a way to go when it comes to winning audience trust if they’re to engage in more meaningful messaging.

It’s smart to focus on the next generation

From ‘Fearless Girl’ to ‘Daughter’, our panel were resolute about the importance of looking to the future. “It makes you think of the next generation”, they said of ‘Fearless Girl’, “and that idea of starting young if we’re going to make a difference.” Of ‘Daughter’, one woman said, “I’d like to think this would have a big impact on my Dad.”

From Glass shortlisted campaigns through to the Grand Prix winner, one thing is for certain – real women know what they’re looking for when it comes to advancing the issues that matter to them. And we in the industry still have some way to go to match their critiques and expectations.

For every near-faultless execution like ‘Fearless Girl’, there are still campaigns, lauded by our industry, that may leave space for misinterpretation and misunderstanding. It’s our job to step up and close that gap. To make sure that the things we love as an industry are equally as loved by the people outside it.

That starts with refining the ways we talk about gender inequality and women. The ways that will make a difference to the people they affect. Afterall, that’s what that Glass Lion was invented for. It’s still a lofty ambition to be working towards.