What Can Creatives Learn from the Kardashians? Daymond John Has the Answer

Trends and Insight 427 Add to collection 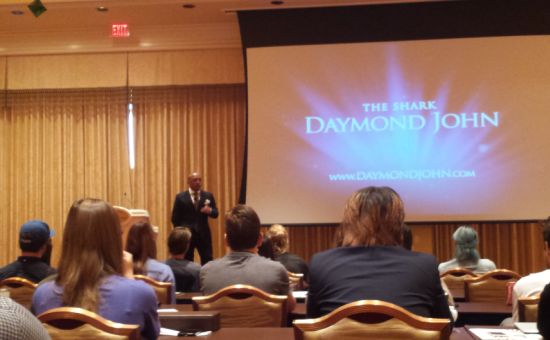 “So you’re screwed. Disruption is ruining your careers, mine too. Why? Because power is going back to the people. They don’t need you anymore. They can create their own content.” And with that bombshell, the man describe by Obama as ‘the greatest entrepreneur of our time’ took to the stage at the LIA Creative Conversations event in Las Vegas today to address an audience of up-and-coming young creatives.

Daymond John, the entrepreneur who founded clothing brand FUBU and went from an enthusiastic part of the early days of hip hop to a billionaire mogul, had dire warnings for the assembled creatives. However he also had words of advice and inspirational examples from his own life experience and – of all places – the lives of the Kardashians.

He asked the audience, pointedly, if they could name exactly what his friends and clients the Kardashians actually did. The resounding silence spoke volumes – and he noted that the business savvy of matriarch Kris had built a successful, global brand on insight, diligence and persistence and not the skills of her brood.  “If they can do that and you can do graphics, design copy… just think what you could achieve. Because you can actually do something.”

In fact, though Daymond had warnings about the future of the advertising industry, he was full of praise for the skills present among the audience and was keen to show that creativity was one of the foundations of his success. “The reason that I’m here is creatives. I can’t design, I can barely write. I don’t know how you do this – that’s why it’s so powerful,” he said.

Creativity was never more important to FUBU’s success than when Daymond managed to hi-jack a $30 million GAP campaign with the help of a disgruntled LL Cool J. The unconfident brand, which was unfamiliar with hip hop and the community and so unloaded the creative responsibility of writing the ad to LL Cool J. His rap included the none-too-subtle insertion of the FUBU mantra ‘For Us, By Us’ – oh and he also wore a FUBU cap during the commercial. Daymond saw sales skyrocket – and even GAP was overwhelmed by an increased footfall from customers who assumed that the store stocked FUBU products.

It was this daring and disruptive thinking that helped forge the brand in the 90s – and Daymond urged the young creatives to make the most of their skills and creativity to survive and thrive in the new democratised media landscape. So while the advertising industry may be undergoing a protracted identity crisis, young creatives are also faced with a world of opportunity to grasp if they are willing to think entrepreneurially - and share the mindset that has seen him and, yes, Kris Jenner thrive. “Your day job will never make you rich – it’s your homework that will,” he said.