Trends and Insight 678 Add to collection

Cluttered and chaotic or a platform for innovation? Industry leaders’ give us their post-match analysis and look to the future 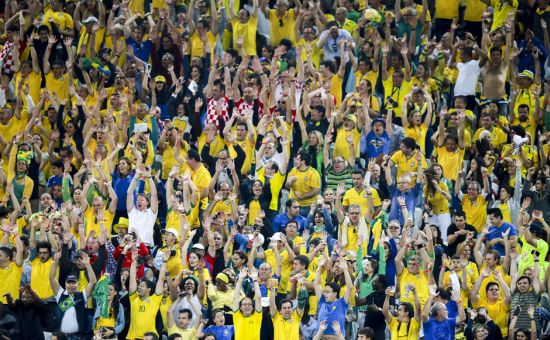 Brazil is in an interesting place right now. On the one hand the economy hinges on an ongoing water crisis and looming energy crisis – but on the other, it’s still basking in the afterglow of last year’s FIFA World Cup, and there’s the 2016 Olympics to look forward to.

But did Brazil’s ad industry take full advantage of the feast on its doorstep? Or did strict sponsor regulations suck out any opportunity that might have once been there? And what lessons have been learned for the 2016 Olympic Games? And will political and economic problems get in the way of sporting success? LBB’s Addison Capper caught up with some of Brazil’s finest ad folk to find out.

2015 has been a big question mark. And the doubt is not whether it’s going to be a good or a bad year. The question is: how bad will it be?

Brazil has more than lost the momentum. All of our problems in infrastructure are breaking out at the same time. We’re running out of water and energy in the major capitals. And, without those two elements, the economy drowns.

Ports are a wreck. The scandals showing on the news have smashed up our moral. GDP will be reported negative. Our currency has devalued.

And, next year, we’re hosting the Olympics in Rio.

So you ask: what becomes of this event?

I reply: it’s going to be one of the most beautiful Olympic Games of all time, in spite of it all.

Rio is the most gorgeous place for sports. And it’s used to hosting major events all year long, every year. Carnaval, for example, is like having the Olympics once a year.

The brands are excited to invest in advertising. Nissan, a client of Lew'Lara\TBWA, is one of the big sponsors. Everything will be festive, strong, beautiful.

We are Brazilians and we are used to – for better or for worse –  getting through crises and overcoming challenges.

I see the World Cup as a successful effort from a media and an organisational stand point and an obvious failure from a sport and government perspective. Both the National Team and the president, Dilma Rousseff, who was expecting big political dividends from the event, were the biggest losers.

The Olympics presents a good media opportunity too but, when compared to the World Cup and Brazilian footballing passion, it has less potential to engage and touch the people of this country. After all, despite having Judo and Volleyball as traditionally strong medal possibilities, Brazil is not a strong Olympic contender, overall.

As for the third element - the economy here - that’s not really helping anything at the moment and it’s a big reason be alert.

So, the World Cup, Olympics and Brazilian economy make an exotic cocktail. And while the first two ingredient can add excitement and flavour to our industry as lemon and sugar can in a caipirinha, the matter is always in having the right cachaça.

Among the many things a country can learn as host of the World Cup, Brazil learned the lessons it needed to most.

First, and maybe foremost, Brazil learned that you can’t separate politics from everything else. The popular manifestations from the previous year made brands reflect on the level of transparency they should take with these issues. They favoured a more honest dialogue. We must have the courage to face matters of this nature, but brands’ superficial discourse is no longer tolerated within effervescent political contexts. It comes under scrutiny for being alienated and lacking value. Relevance isn’t obtained, either, which is the biggest potential of conversation in the digital era. It lacks integrity and transparency.

Secondly, Brazil had to deal with the kind of humiliation [in the tournament] it had never dreamed of. Likewise, the brands were prepared to act exclusively with pride, in victory or defeat. But in face of a third unpredicted scenario they even had to adapt their reaction time to what was happening. The brands that humanized their posture and knew how to wait in silence for Brazil to process that deception did well, even in the most ‘real time’ and ‘always on’ World Cup in history, where they had already learned to prepare instantaneous responses to everything that happened.

These are great lessons for the Olympics, which will certainly teach us things we don’t even dream we will experience.

The two largest sporting events in the world significantly stir up the dynamics of the advertising industry. Both global sponsors and major local players concentrate their media budgets into a short period of the year, increasing investments in TV media. The lesson the advertising industry can learn from the World Cup is that, though the entire population had misgivings about the organization of the event, the politics involved, and the bleak economic scenario, viewer ratings, audience involvement and brand engagement were above average, thereby generating awareness and sales.

FCB Brasil didn’t have any clients directly involved in sponsoring the event. However, during World Cup years, SKY usually sells more subscriptions as more TVs are sold. And Nivea has long been sponsoring volleyball, the sport that has earned Brazil the biggest number of medals.

In July 2014, the Brazil World Cup ended and it was considered a success, according to FIFA, the Brazilian government and most people who were in the stadiums and host cities during the tournament.

As another grand demonstration of national prestige, the Olympics will encounter a very different scene than that euphoric and confident Brazil that was elected as‎ host city in 2007.

Today, Brazil is emotionally drained by allegations of corruption, polarized by recent presidential elections and full of uncertainty about its economic future.

In a moment like this, the perspective of putting on an event the size of the Olympics brings risks and opportunities for brands and sponsors.

Risks because in times of an imminent recession, each cent is vital. Taking decisions as to where and how to invest is even more difficult and as a result, pressure for results only increases.

Opportunities because in a moment with so much uncertainty, celebrating universal values can come at just the right moment to motivate how millions of people feel about the present and the future.

I believe that a great lesson from the World Cup for the market of advertisers was about courage and timing. Courage to take positions that challenged common sense and contagious pessimism, and timing to do this as soon as possible, activating messages in advance and dynamizing investments.

During the World Cup in Brazil, it was this attitude that separated the players from the champions.

Our experience with great events has been rich, but painful.

The World Cup has passed and it was, at the same time, good and bad.

Good, when we thought that everything would go smoothly, with no social issues and no structural crisis. Both were kind of expected to occur since many of the constructions were running late, but somehow ended up being delivered on time.

Bad for the communications market since the optimistic outlook did not come through. Brands that could and should have taken advantage of this moment didn’t accomplish their strategy for fear of public opinion and because they already felt the beginning of an economic retraction.

The Olympic scenario is quite similar and could be even worse for agencies and media vehicles. Everything resembles the pre-Cup moment: the tense social movements, a serious political crisis – maybe one of the deepest ever -, an economy that trails behind this reality and furthermore, a complete lack of organization by the host city.

I hope I am seriously mistaken, but today, I am not able to foresee a smooth and favourable horizon for brands and products to fare well.

Obviously the event made a difference for our economy and the communications industry (publicity market) but not in the way we expected.

FIFA determines who is in and who is out and that’s it. End of the story.

Having so many rules and policies established by FIFA, the advertising industry has no option and backs up to just watch the event.

Having said that, we believe that this process is going to repeat itself with the Olympics as the Olympic Committee apparently acts in the same way as FIFA does.

Spaces for ads are few and far between during these events.

Brazil is in a bad shape regarding economy and that directly affects everyone. That’s a fact. The industry is recessive and therefore it ceases to advertise.

It is a chain process and the pieces start to fall.

Apart from the World Cup and Olympics, the country is going through an economic crisis and we are already feeling it in our budgets. There are already dismissal plans of many companies and agencies are already starting to lay off employees. Everyone is holding their accounts.

The journey towards the 2014 FIFA World Cup was a very cluttered marketing environment - and that pushed the Brazilian advertising industry to innovate.  For example, Coca-Cola changed, for the first time, the colours of 300 million cans from the iconic red to the green, yellow and blue of the Brazilian flag. Social media also played a big role – putting to test the ability for brands to quickly (and intelligently) react to the unfolding of events, and integrate that to their presence on TV.

The World Cup provided valuable learning for how advertisers will approach next year’s Rio Summer Olympics. With the economy in not such great shape, they'll have to make each dollar work harder towards their goals. Rio will be yet another fantastic opportunity to demonstrate that superior creativity is the most effective way to deliver results. We should all look forward to