What Are These Giant Ominous Orbs in Lowe Campbell Ewald's US Navy Spot? 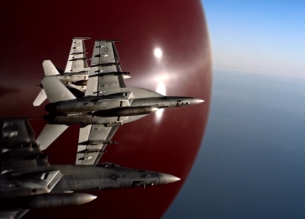 Lowe Campbell Ewald has launched a new TV spot for the U.S. Navy.  The spot, which just launched during ESPN’s X Games Aspen 2015, shows audiences that America’s Navy is the only military branch that’s on watch around the world and around the clock. It is also the first commercial to highlight the Navy’s role in protecting the U.S. against both physical and digital threats.

In order to truly encapsulate all of the Navy’s capabilities, Lowe Campbell Ewald took on the difficult task of incorporating various complex land, air and sea shots and gave the spot more of a “movie-like quality” with its enhanced visuals and music. Entitled “Pin Map,” the work features obscure red globes in the background of each shot that are later identified as “pins” – similar to the ones you would see on a map to “pinpoint” your location.

The pins speak to the hundreds of locations you can currently find Navy personnel – whether it be a snowy mountain top, harsh desert, deep in the jungle, among the clouds or open sea. The spot’s intense music and locales showcase the complexity of what the Navy does and rounds out by stating “Around the world, around the clock. In defense in all we hold dear back home.”

The campaign is targeted at recruiting prospects, and also serves to educate general audiences on the Navy’s roles and responsibilities – which go beyond just ship operation. The work includes three TV spots and launched during the Winter X Games – a viewing public that is within Navy’s target age group of 18-24. The campaign has now started to run on additional networks this week through a national buy that includes more than 20 broadcast and cable television networks.